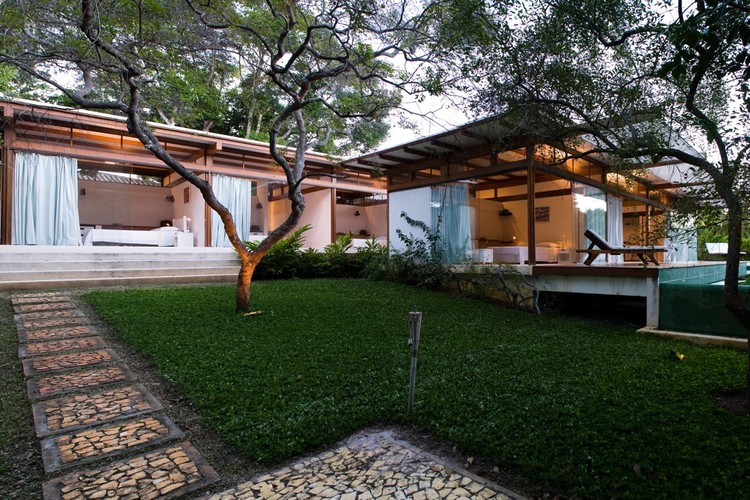 Text description provided by the architects. In the construction of the Busca Vida House, the constructive and environmental affinities that arose between the owner and architect, started from the earliest stages of the project. Mainly the existing vegetation dictated the deployment of this residence. It was both the owner and the architect interest to preserve as many trees as possible, resulting in the removal of only one small tree. The design of the house, located in Camaçari, northern coast of Bahia, was laid out with contemporary lines, utilizing natural ventilation and sun light through large glass panels.

To fulfill the desire of the owner to receive friends, and at the same time not to have her privacy jeopardized, the program was distributed in two separate pavilions. The first, designed exclusively for the owner, has a suite, living room and dining room, a small kitchen, a pantry, storage and service area. The second one has three suites to receive friends. The interconnection between the two happens through a covered social area with common usage, which was installed in an inviting gourmet kitchen. Aligned to the first pavilion, are located the deck and pool area allowing the expansion and integration of the internal area, summing up to 445m2 of built area.

By the characteristics of the site, the foundation of the house were executed in reinforced concrete, detached from the soil, eliminating moisture problems, and improving the natural ventilation system. On this basis of concrete, the material specified to play the role of structure was Cumaru wood, which constitutes the pillars, beams and roof.

The ventilation system also received attention. The wooden structure was designed with a system of two beams around the perimeter of the pavilions. In the lower beam were fixed sliding glass panels, while the upper structure supports the roof. Between these wooden beams mosquito screens are placed allowing cross ventilation to occur throughout the house, even when the glass panels are closed.