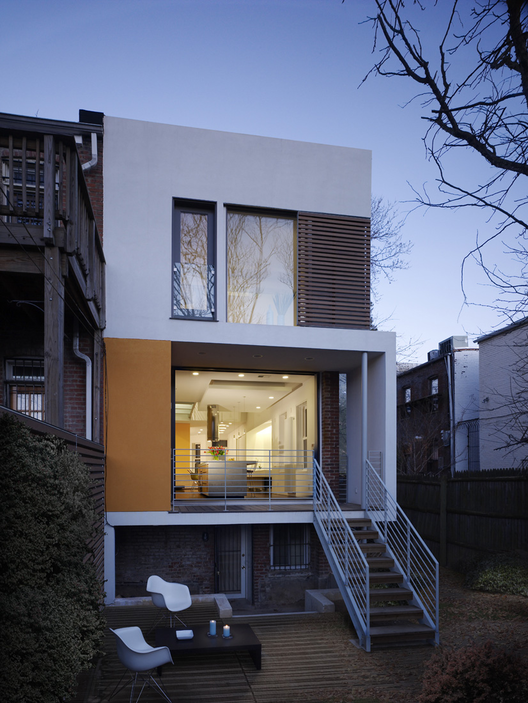 Text description provided by the architects. The R|B House is a re-conceptualization of an end row house unit in Capitol Hill, Washington DC. The project furthers a continuing exploration in sustainable urban residential design. The existing two-story structure was originally built in 1906 and represents the archetype of single family dwelling units in the city. The house had been renovated in the early 1970’s, but the interior space remained a series of compartmentalized programmed rooms reminiscent of more traditional lifestyles.

The owners approached Studio 27 with an open ended request, the only stipulations being a re-configuration of the existing circulation pattern and thoughtful consideration for the ecological impact of the project. The scope of work evolved through an investigation of sectional manipulations focusing on apertures, daylight and natural ventilation.

The Architects strategy displaced the dark, musty interior with a sense of openness, both in plan and section, to create a more implicit series of relationships between traditionally separated hierarchical programs. Studio 27 removed a section of the second level floor joists to carve a void through the middle of the house over the dining room, enabling shared light between all spaces, and introduced operable skylights to create a per formative stack effect to control ventilation.

The second floor is divided into two bedroom suites, connected by a tubular steel and glass bridge that further contrasts with the heaviness of the existing masonry. Energy and water consumption are additionally minimized through the use of tank less gas-powered water heaters, new low E glass windows and doors, bio-based insulation, low-flow plumbing fixtures and dual flush wall hung toilets, and all interior finishes are domestically resourced recycled and formaldehyde-free to improve indoor air quality. As a result, the ’Open’ House represents the non-traditional urban sustainable lifestyle.