Exhibited at the BSA Space as part of the Boston Design Biennial in 2013, Matter Design's Helix is a concrete spiral staircase that is full of surprises. Chief among these is its size - the stair was built at half-size to address the practical issues of weight, liability and access - but more important are the details of its assembly. While the steps of most spiral staircases are supported from either the stair's perimeter or a central column, Helix transfers loads directly through the steps below to its base which, rather than resting on the floor as it appears, is in fact suspended from a beam in the ceiling. 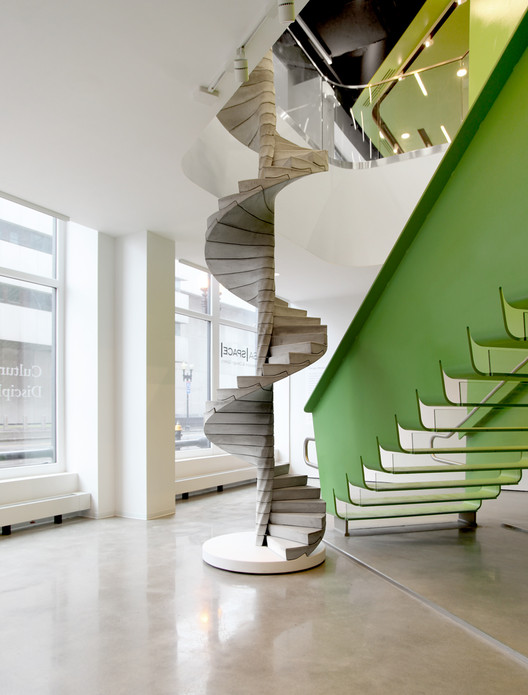 This unconventional structural system was inspired by the material in question: as unreinforced concrete has poor tensile strength, it is unsuitable for use in a cantilevered system as used in many spiral stairs, prompting the development of a stacked system. Each step hooks around the central threaded steel bar, and is clamped to the step below, with interlocking elements to prevent the steps from slipping. The central threaded bar, in turn, connects to the ceiling above to support the entire assembly and keep the stair steady.

The project was inspired by Matter Design's attempts to define a contemporary interpretation of stone architecture, and their "pre-occupation with the translation of ancient and often lost methods into contemporary culture and practice," say Matter Design founders Brandon Clifford and Wes McGee. The rounded, plastic appearance of the stairs is designed to reference the original, fluid form of the concrete, while the organic form is juxtaposed with the precise interlocking structural system of the steps.

However, casting the steps in concrete while maintaining the precision required for the interlocking elements was no mean feat. Developed in collaboration with Matthew Johnson of engineers Simpson Gumpertz & Heger, the solution required a custom-built mold comprising rubber inner molds, with a wooden "mother-mold" to clamp the entire assembly together. As the concrete was poured, the entire mold was vibrated, and the entire assembly was steam-cured for 12 hours to ensure a high-quality finish on each step.