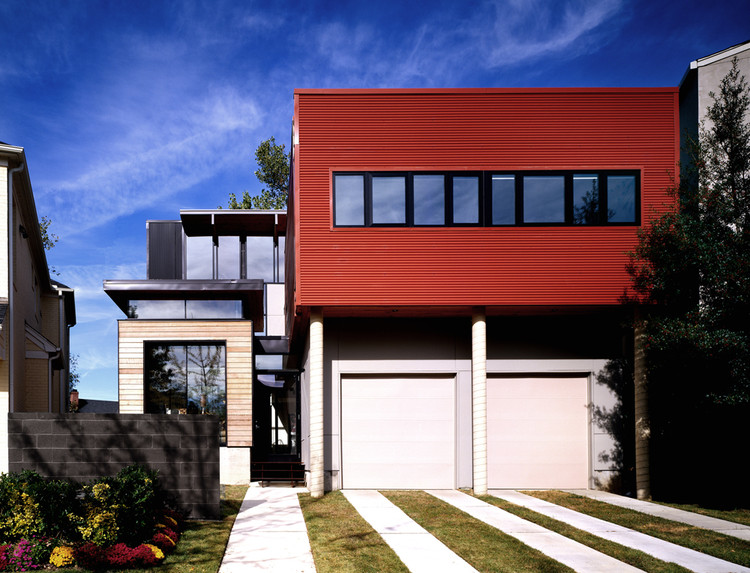 Text description provided by the architects. To design a speculative modern home conducive to urban family life, set in a New Urban community on the edge of Downtown Memphis.

The house’s design responds to the pie-shaped site and embraces modern aesthetics while maintaining a similar scale with the surrounding traditional neighborhood development. With only 32 feet of street frontage, the front of the house is dedicated to vehicular and pedestrian access, while the rear is nestled in the trees with views to a small neighborhood pond and walking trail.

The house is broken into three primary masses based on use, each rendered in its own material. The front elevation is composed of an orange-clad corrugated metal volume cantilevered over the lower level, clad in cementitious panels. Entry is made between the primary orange mass and secondary mass housing the office, rendered in redwood.

The rear mass, a glass-faced two-story component, fronts both an internal courtyard and a rear pond. Its eastern clerestory glass wall is balanced by a western wall of double-height glass covered by an exaggerated overhang. This overhang protects the glass from harsh afternoon sun while structurally supporting a metal grate balcony accessed off of the master suite. Daylight is plentiful within this three-bedroom home that is functional, open, and designed within a tight budget. 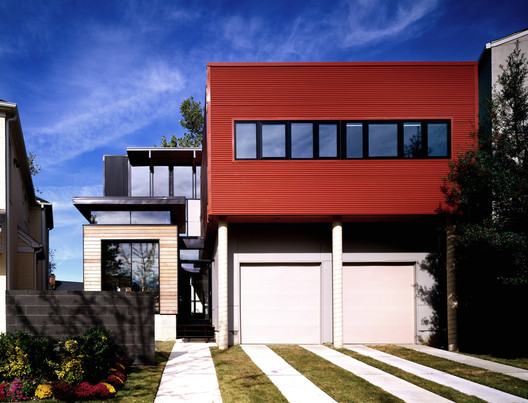