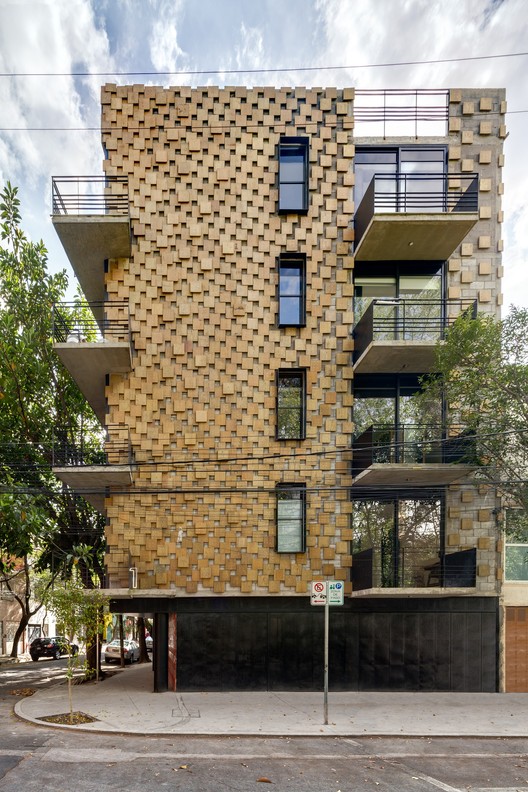 Text description provided by the architects. It is an apartment building located in Colonia Condesa, an area known for its social, commercial, cultural and nightlife. The building is located on the same side now occupied by the Fondo de Cultura, former Bella Época theater, a landmark in the area and a building from the 1940's where a 20 meter high tower stands.

We began the analysis of this building taking into account some peculiarities of the site that is located at the corner of two streets with different synergies and readings for both the passer and the inhabitants. Benjamin Hill, an important motor traffic, pedestrian and bicycle avenue, which is in turn access and / or exit of the neighborhood; additionally, a market on wheels appears. In contrast, Reynosa street is only used by people who live in it, it is in fact a very small street.

Therefore we decided on two facades, one partially insulated by a wooden lattice to Benjamin Hill and the other open, with long balconies and a large sliding glass wall on Reynosa. We take social life and the urban movement in the area as elements that directly affect the integration of the project into its context.

We retake an element of what happens in the street as a reference of design, a box of wooden strips in which vegetables are transported, known in Mexico as "huacal". This element makes us refer to the containment and isolation and also to the opening and the movement of the market on wheels.

As part of the architectural program, we had to comply with a free area, we proposed two cubes of light with clear roles, designed a courtyard which provides ventilation, located the service accesses through a vertical circulation, and another that opened the view to the Fondo de Cultura tower; further generates cross ventilation in the apartment, and gives us natural light from all directions. On the other hand, we designed private balconies towards the interior of said light cube.

The whole project is "suspended" on a base, where the parking is located; in the corner there is a small public space in which we have arranged seating cubes with a wall of red ceramics as a background, this wall is illuminated at night creating a very cozy atmosphere.

It is interesting to see the interaction of pedestrians with this space and the overall context of the area which is about much pedestrian, bicycle and vehicular movement. All this responds to the constant movement of commercial, entertainment and culture of Colonia Condesa. 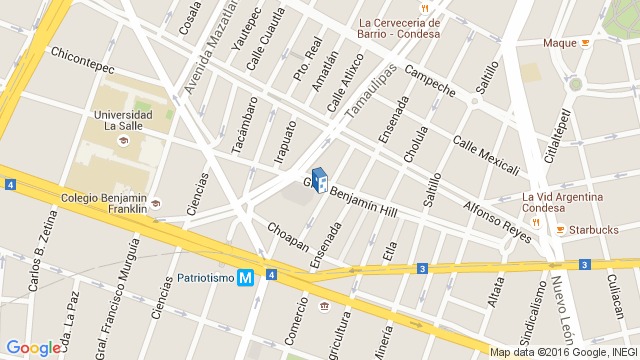