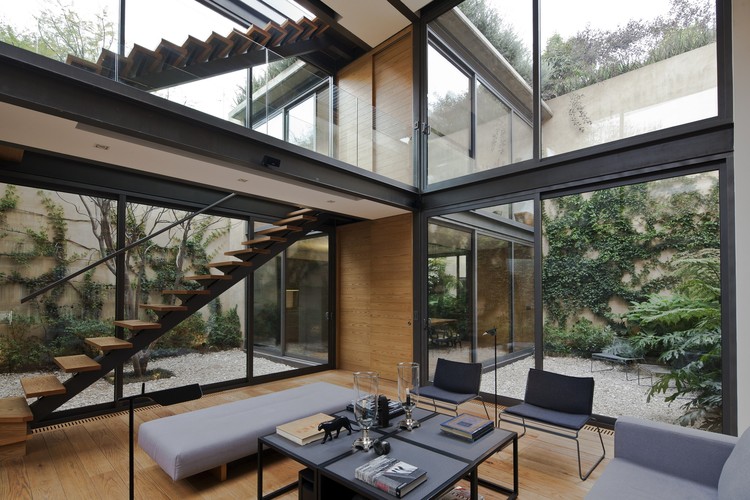 Text description provided by the architects. Located in the heritage area of the old town of Tacubaya, this house aims to reinterpret the use of the courtyard in a contemporary manner. In the lot there was a very run down structure, which was demolished to build the new house.

A perimeter wall 6 meters high insulates the house from its environment, containing the space. This wall becomes a discreet facade towards the street that respects the height of the neighboring properties and the harmony of the street. On the ground, the house reads like a chessboard, alternating solid volumes and courtyards; but as the house is made of glass throughout, the space is conceived as one: the inside becomes the outside and vice versa.

The metal structure plays an important role in the project, it creates a three-dimensional grid which defines the spaces; it is also slim enough to allow transparency. The structure is visible both in the ceilings and floors giving rhythm and order.

The house has two floors, on the first there are the public spaces: entrance, parking, laundry, kitchen, dining room and study. On the second floor there are three bedrooms with their own dressing rooms and bathrooms. The living room, double height, spatially connects the two floors, stairs and courtyards.

The vegetation of the courtyards becomes a part of the house, giving the impression of living in contact with the outside. Thanks to the courtyards, the sun bathes the house all day creating a play of reflections and shadows that animate the space.

The roof is a garden with a glass cube protruding amid the plants; it regulates the temperature of the house and is the ideal place to read, watch the vegetation and the roofs of the old town of Tacubaya.