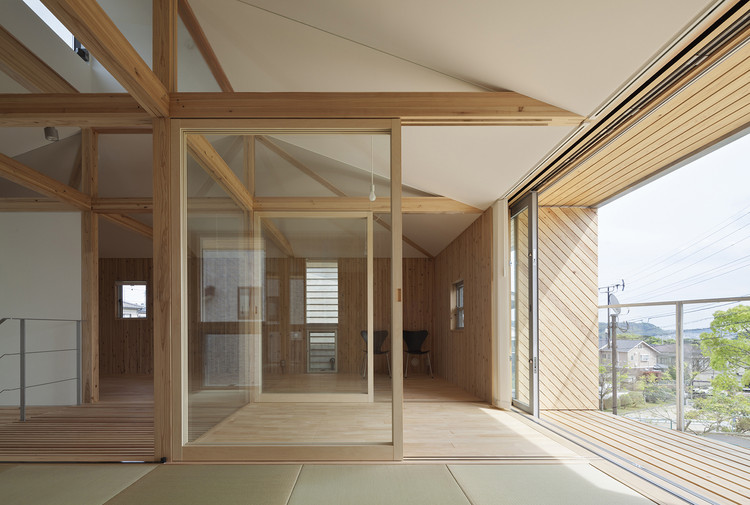 Text description provided by the architects. This is a house for a couple and two children in Kagoshima, south-west part of Japan, where high temperature and humidity. It was aimed to passively control the indoor climate in connection with surroundings, building composition and physics, and room arrangement by referring traditional local building solutions.

The house was designed as a compact square block with large roof based on the wooden hybrid structure system – a combination of massive glulam panel and post and beam (P&B) frame. The exterior wall is made of the glulam panel (t=105mm, uncoated) playing an important role in fulfilling the building performance. This massive wooden wall works as the load-bearing frame, thermal insulation, interior cladding and airtight layer. This multifunctionality makes best use of the inherent structural and thermal properties of wood and simplifies the building composition, resulting in an optimization of construction period and cost. In fact, in the same scale, the construction cost of this house was comparable to an ordinary wooden P&B house in Japan, even though the glulam panel, which is much expensive compared to sawn timber, was used.

The massive exterior wall bears all horizontal loads applied to the building due to earthquake and typhoon. The interior structure is, thus, pure P&B frame, which forms the floor and roof. As consequence, the interior space could become flexible for possible future changes in room arrangement thanks to the absence of load-bearing wall inside. One of the pillars standing on the first floor is the Japanese cypress planted by the client's grandfather and harvested by the client's father, bringing a connection of the three generations of the family to the house.

In order to absorb wood movement, the exterior wall is divided into L-shaped elements, which are standing on four corners of the house having slit between each other. The slits lead natural light and wind into the inside and give residents open feeling toward the outside. Fresh air comes in the house from every direction and the clearstory window located in the centre of the roof accelerates indoor natural ventilation. Wooden folding doorsattached to the large slit on south facade act as a storm shutter (closed state) and a sunshade at dusk (open state). Although the massive wooden wall would be inferior to a standard timber framed exterior wall in terms of numerical thermal performance (e.g. U value), here dynamic thermal/moisture buffering, thermal mass and visual/haptic/olfactory effects of that are expected to maintain the indoor climate in an appropriate manner. The roof consists of two sheets of roofing board having a thick ventilation and radiation barrier layers in between for the purpose of minimizing overhead solar radiation in summer.

Using materials on the basis of “the right material in the right place” based on proper understanding of their properties could increase the quality and performance of a building without compromising economic justification. In that sense, the wooden hybrid system may lead to further popularization of wood in construction. 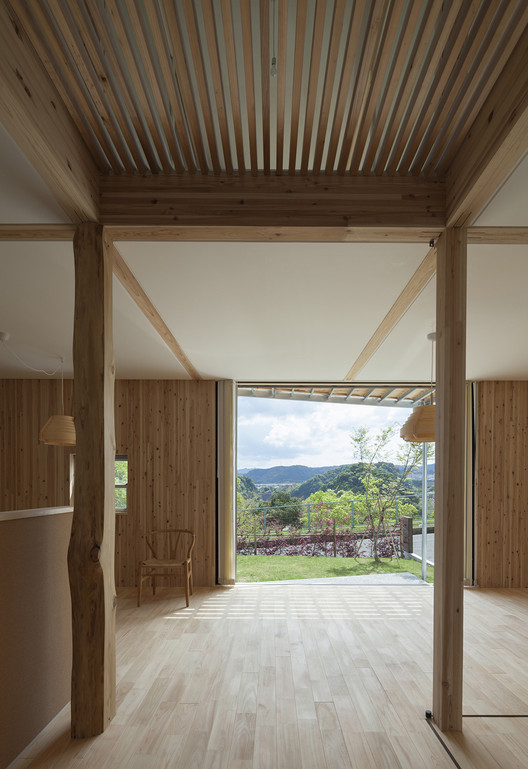