Save
House in the Woods / Parque Humano 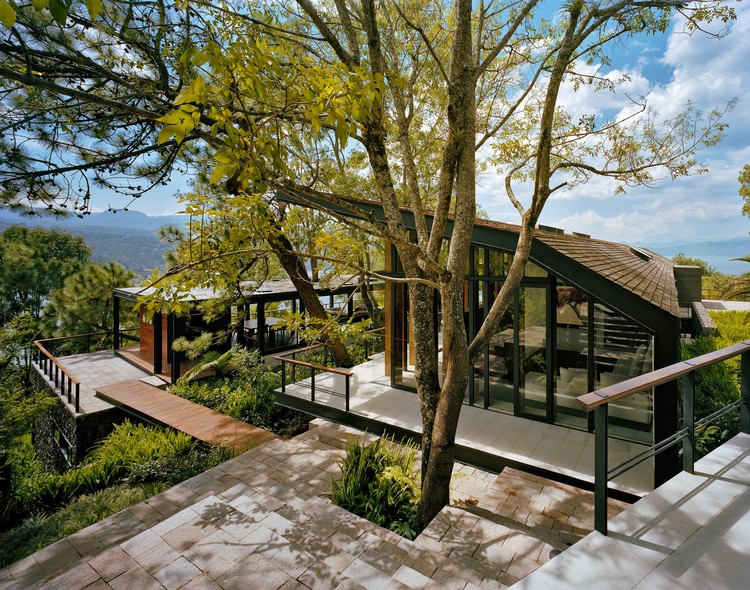 Text description provided by the architects. The house is located in Valle de Bravo, Estado de Mexico, Mexico, weather ranges from 33°C to -2°C. The plot faces Avándaro Lake and the protected forest area of Cerro Gordo, rich in pine and oak trees.

For the concept of this project, we asked ourselves whether or not we were capable of building a house that would respect nature to the fullest and forge a connection with the building’s surroundings (without speaking of energy, sustainability, and ecology) that through its impact and experience would generate that same respect for the natural world. To do so, we have taken advantage of the slope of the land in order to create visual connections at different elevations with the existing vegetation and landscape beyond.

The site is a splendid plot covering 3,500 m2 with rich and varied flora, very tall trees, and a view towards the layered hills of Valle de Bravo – a town 150 km south-west of Mexico City. The climate is cool in winter while summer temperatures can reach 35°C and heavy rain falls daily between June and October.

The house occupies a natural ledge in the hillside, facing the view to the south and turning its back to the winds coming in from the north. The ground drops away beneath the floor, emphasizing the slope of the land and thereby dramatizing the house’s progress through the site. The house evokes the feeling of floating above the garden, accentuating a sense of contact with nature.

The continuity between landscape and building is stressed by a glazed structural window system, transcending conventional distinctions between inside and outside. As a result, all the spaces are in direct and intimate contact with the outdoors. The play of light and shadow upon these windows echoes the abstracted shadows of trees cast across the courtyards of the convent in Desierto de los Leones, located near Mexico City.

The cladding of the house evolved progressively in order to fit into the context of the town. An artisanal clay veneer was specially developed for the project, similar in texture to the traditional houses that you notice in the area. Its reaction to the weather causes the material to change constantly in response to varying levels of humidity.

Two pavilions, unequal in size, are set in front of the pool area. The first and biggest one contains the living and dining spaces, kitchen and a working studio. The second one: two bedrooms. Each pavilion was carefully placed on the site, incorporating all the existing trees into the program and facing the most important views. The house is deeply rooted in the existing landscape.

Upon arrival, the visitor encounters several experiences: the escarpment, the flora, the house, the reflecting pool. Visitors are received under the protection of a steel enclosure, entering through a small door that leads to the living room, thereby emphasizing the contrast between the closed nature of the entrance and the full openness of the living spaces and the valley itself.