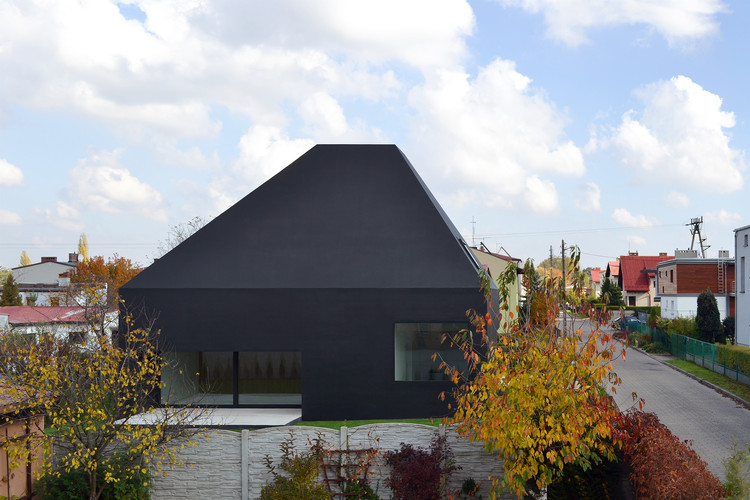 Text description provided by the architects. The building is situated on a small 510m sq. plot, among a densely built-up residential area of  detached houses.

The residential street where the proposed house is located is of eclectic character. The formal and stylistic chaos of individual buildings is in opposition to the spatial order of the street. This divergence influenced the design concept, which favored the spatial context over the formal one, ie. it was more important to match to the order of the street (compact shape, emphasized building line, proportions of the edifice) than the form of the building itself. Regardless of it, the new house will always be just the next component of the existing stylistic chaos.

The limited site area, as well as the south side access, were the two main factors which determined the final house position within the plot. Placing the building maximally close to 3 of the site boundaries allowed to enlarge the garden as much as possible and therefore maximize the limited development potential of the site.

The compact and sustainable form of the proposed building encloses from the street and opens onto the west facing garden. The hipped form of the roof was dictated by the almost square dwelling house footprint. A simple pyramid roof underwent sculptural transformation. Firstly, the top of the roof was ’dragged’ towards the garden to achieve a visual set back from the adjacent property, then the roof was inclined towards the street to emphasize the existing building line, and finally the rooftop was ‘cut off’ to form a large (2.5m x 1.8m) skylight, enabling the daylight to penetrate deep down inside the house.

The homogenous appearance of the building has been achieved thanks to externally applied sprayed polyurethane layer. The technology, typically used in industrial construction, has been used in such a way in Poland for the first time. The proposed house consists of two ‘faces’: dark and inaccessible from the outside and bright and spacious from the inside. Contrast intended.