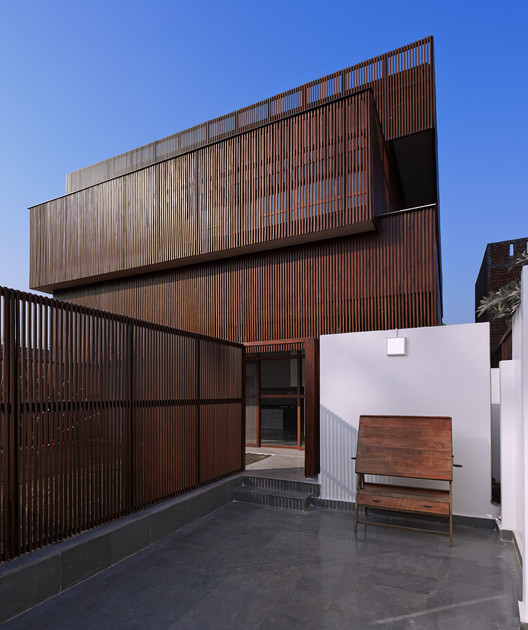 Text description provided by the architects. The Lattice house is located in a new suburb on the outskirts of Jammu city in north-western India. Its context is symptomatic of the nature of urbanization in many small Indian cities, growing at a pace quicker than that of government/municipal intervention. Where informal settlements and private need based developments begin to shape the rapidly urbanising landscape. And formal planning strategies are mere responses to the new and informal settlements.

Building in a context like this lacking a distinct contextual urban fabric (besides the infrastructure pylons) the project attempts to be a sharp urban marker visible from a distance, its material singularity in sharp contrast to the placelessness of the surrounding developments.

The house is broken into a series of horizontal bands mimicking the incremental nature of growth of the neighbouring buildings, the architectural form of which is a mere derivative of changing space requirements of a family over a period of time. These bands hence became a kind of building block on our site, moving in or out in response to the light requirements of the spaces they encompass.

The façade of the house is also a response to the climatic severity of the region which experiences extremely hot and dry weather for 8 months of the year and hence the horizontal bands of vertical wood lattice screens act as light filters.

Each of the two levels in the building is to be used by separate families. Programmatically the house is structured by the clients lifestyle which involves a lot of entertaining and hence the kitchen becomes the centre of the plan flanked by the living/dining on one side and the lawn on the other. The private functions of bedrooms are placed to the rear making the collective programs of living, dining and cooking, happen as a seamless space towards the front opening out into the lawn. All programs whether private or public open into side or front garden spaces.