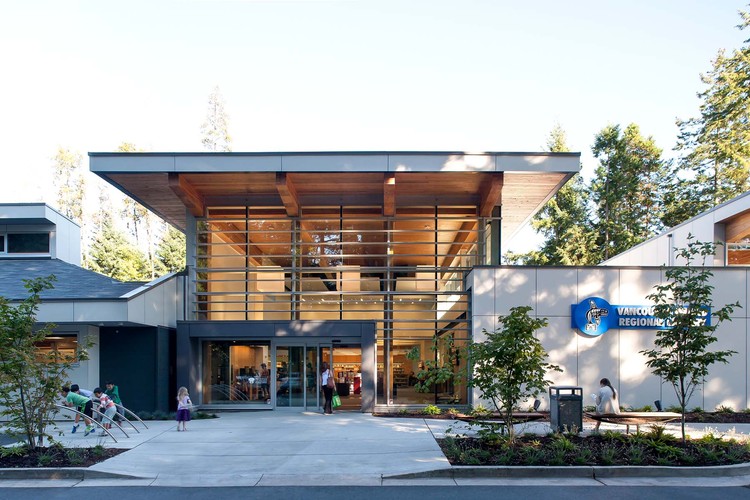 Text description provided by the architects. The Nanaimo North Branch Library project serves to establish a much needed new branch library in the north end of Nanaimo and modernize & reinvigorate the existing Central Services building owned and operated by the Vancouver Island Regional Library, which services its 38 library branches across Vancouver Island. The building is situated on the north side of Hammond Bay Road on a naturally wooded site, defined by significant douglas fir and pine trees, and is flanked by a forested lot to the west, a one storey Fire Hall to the east and backs on to an existing Seniors Housing complex to the north.

Inspiration for the design and renovation of this building was derived from the majestic trees that surround and occupy the site; to connect with the natural beauty that resonates as the sunlight filters through the fir trees throughout the day. The aim was to embrace our connection to nature by capturing the filtered daylight deep into the heart of the build- ing and allow views, from base to limb, of the very trees being preserved. Internally, the building incorporates substantial douglas fir glue-lam columns & beams and solid fir decking, harvested and produced in BC, to support the primary public gathering spaces in the library, signifying to the visitor the strength and beauty of this valued natural resource.

The new library addition was located on the south side of the site to en- sure that the most significant ‘public’ function would be located facing the street, while preserving the central services functions of shipping/ receiving and administration at the rear of the site. The main entrance to the facility is located at the intersection between these two structures, allowing one to enter into the centre of the building. With the removal of a narrow portion of the existing building, the new library extends out into the landscape on both sides, delineating the programmatic complexities of the library functions though ‘ribbons’ of space, articulated with undulating plan and roof forms that weave through the building in layers, creating spatial transitions that are punctuated with natural light. This dissection of the ‘box’ provides for a greater connection to the landscape from within, allowing bands of natural light to filter into the library. The clerestory windows make an important visual connection to the tall trees surrounding the site, much of which have been carefully preserved through the undulating building form. These trees would otherwise only be visible as tree trunks from within the library.

Being a brownfield site, the project embraces sustainability by extending the life of the existing building through end-of-life upgrades to the building mechanical system, lighting, windows, building envelope and finishes. A new sprinkler system was installed throughout and existing cladding was replaced with new locally sourced t&g cedar siding. Structural upgrades were made to existing wood posts and trusses with PSL beams and steel columns to increase the seismic resistance of the existing wood structure. New finishes incorporate natural maple wood veneer products to enhance the warmth and complement the douglas fir structures.

Sustainable Design The design team used 3D modelling to study passive solar opportunities, combined with a computerized ‘energy’ model to evaluate and maximize building efficiency and energy conservation. A below grade retention pond at the low point of the site was used to capture rain-water and slow-release it back into the ground and all existing building fixtures were replaced with new low flow plumbing fixtures and low energy use light- ing. The mechanical system consists of high efficient air to water heat-pumps with dual capacity for heating and cooling the building through a four-pipe water system, which exchanges the residual heating and cooling throughout the building as needed, thus reducing overall energy consumption. This system is integrated throughout both the addition as well as the renovated spaces. In-ground ducts supply tempered fresh air to the building addition perimeter with high level return air passing through a heat exchanger. Passive solar techniques implemented include external shading devices and structural south facing roof overhangs to shade the building interior from solar heat gain in the summer months while allowing winter sun to enter the building in a controlled manner. Use of clerestory windows for added natural light reduces electricity needs. The existing building was completely refurbished with new lighting, insulation and windows to extend the life of the building comparable with the new addition, thus raising the value and efficiency of both the library and central services facilities. Existing trees and planted shade trees were used to filter summer light and high efficient glazing systems contribute to the building envelope performance. Locally harvest wood products were used through- out the building to celebrate the forest industry in BC and support local businesses. Longer lead items such as cement paneling were selected for their long-term durability and solid-thru, 25 year finish properties. Drought tolerant plants and native trees were planted around the building and new pedestrian paths were integrated to connect the main entrance with the street, the adjacent bus stop and the retirement complex behind the site, thus encouraging walking and biking to the library.

The new addition accommodates state-of-the art technologies in library services, sustainable design initiatives and construction materials, culminating in a modern architectural design expression with civic pride and an affinity with the natural landscape. 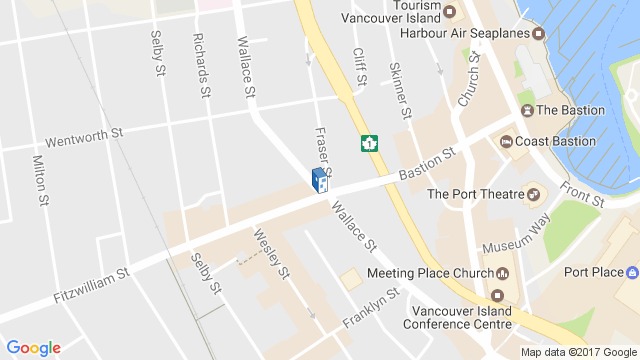