Text description provided by the architects. This is a reconstruction project for a public nursery affected by the 2011 Tōhoku earthquake and tsunami. It was carried out as “a leading project for creative restoration”. Located near the ocean, the school is in a peaceful area full of nature. I wanted the new building to be in harmony with its surrounding environment and not to disturb the atmosphere.

In order to achieve these objectives, I decided to keep the height of the building low, rendering its structure horizontal. As a result, the nursery has a modest appearance, with a low ceiling and a large courtyard which does not feel claustrophobic. This courtyard can be treated as part of nature.Furthermore, the new construction assimilates the outside nature into the courtyard. A number of semi-outdoor spaces which face the courtyard connect the building with its external environment.

This way, children can run around the nursery both indoors and outdoors. The building’s presence becomes a small part of nature and integrates with the outside environment. The thought behind this construction is similar to that of ancient monuments in ruins. In other words, this building is not a normal nursery: it must be an environment where children and adults can spend time in the fields. The fact that this nursery provides this kind of environment makes it feel liberated and unconventional.

The outer part was designed with a number of conversations with the users and people living in the neighboring area. I did not install their requests regarding the nursery in one box-shaped building. Instead, I directly arranged them in the fields surrounding the courtyard in a circle in order to help viewers visualize the process of construction. This way, the townspeople can mutually share the feeling of creating the nursery school.

This was also because the mayor of the town demanded greater speed for the reconstruction. I could easily imagine (at the design competition) I had to go on updating and execute planning as speedily as possible according to their requests, whether I liked them or not, in moral implication under reconstruction activities. But also I had to make and keep the "gestalt quality" (a certain symbolism of the architecture), because the townspeople also entreated me to produce an eternity or a symbol such as a prayer for the reconstruction. One of the problems was the sprawl.

It occurs when many desires have rush on the discussion table. There is no choice, but I have to control them with something of cosmos. So the square courtyard is seen as a symbolic hollow and functions as order for the chaotic aggregates. That’s why this architecture is complexly shaped. But it generates a variety of experiences and operates as if it were a small village.

The "sparkling wall" is made of 0.3mm thin stainless sheets as an envelop of the building. I wanted to create the sense of going through a "byobu" (Japanese folding screen) which craftsmen paste, as opposed to that of simply entering a building with prefabricated panels. I also gave its walls durability, because it is located near the ocean. Moreover, the reason for this dazzling wall is to reset the visitors' minds with a start breathtakingly, make them experience with fresh eyes, and remind the memory of the reconstruction with everybody’s effort while they are so easy to forget it in daily busyness.

At the front of the building, there is a lounge with a wide, open gate where local residents can gather and communicate with one another in a friendly environment. Shichigahama Tohyama Nursery is more than a school: it is a garden for the townspeople. We hope that this nursery will be shared by everyone in the town and that it will one day become part of the town’s history. 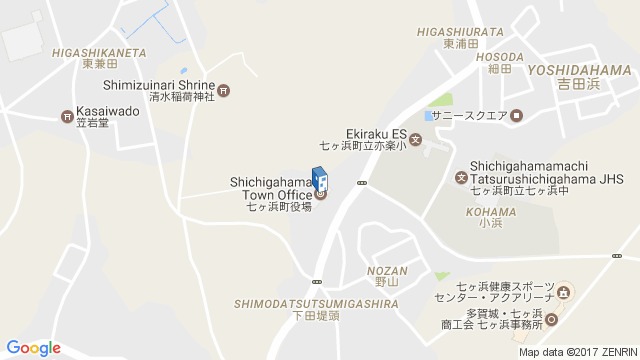 Location to be used only as a reference. It could indicate city/country but not exact address.
Share
Or
Copy
About this office
Takahashi Ippei Office
Office
•••