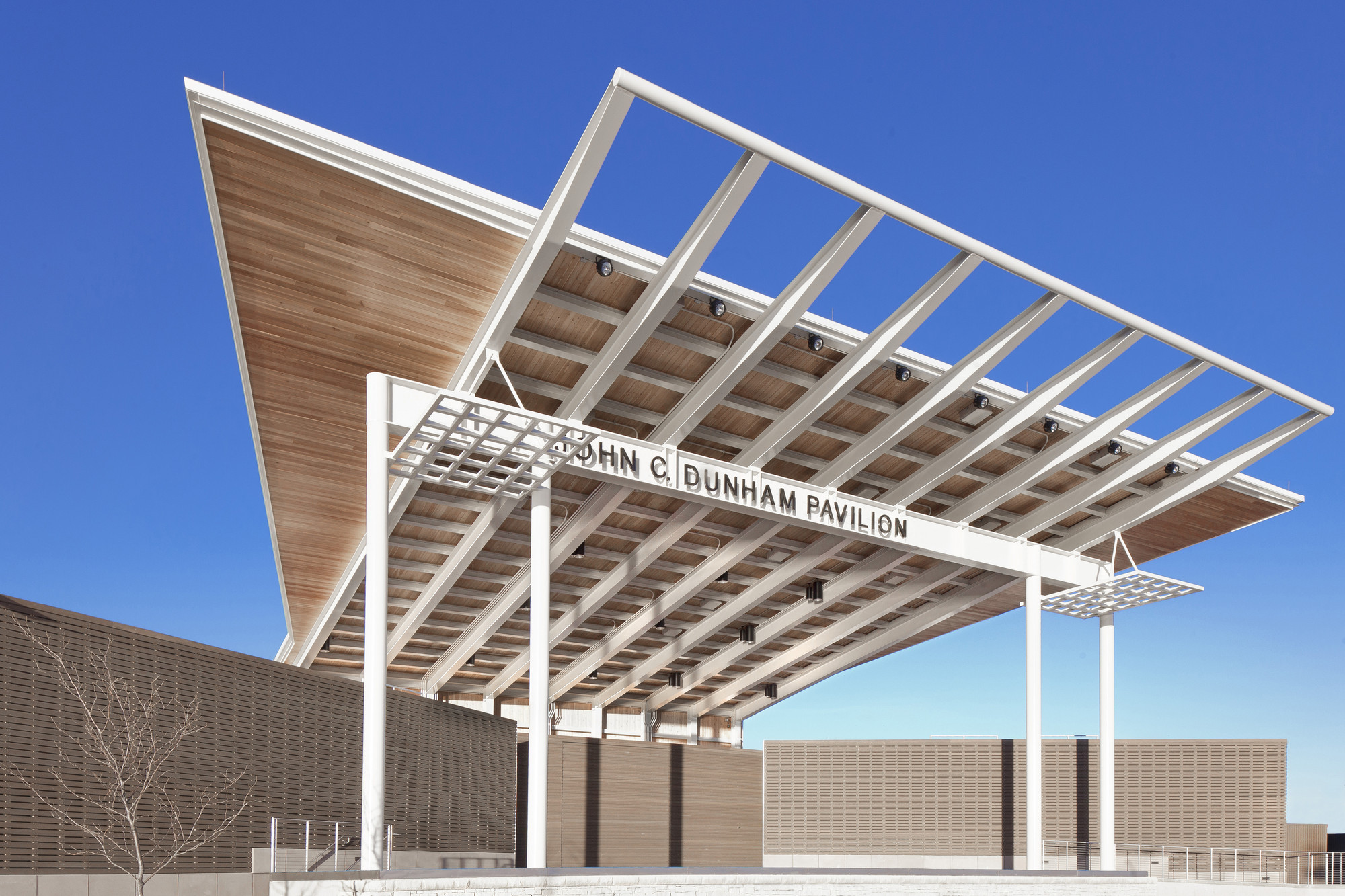 Text description provided by the architects. The John C. Dunham Pavilion and its associated structures were recently completed as the first phase of the new RiverEdge Park for the City of Aurora, Illinois.. The park is located on former industrial land lining the Fox River just north of Aurora’s downtown district. It was conceived as a new civic asset and regional attraction. The images and graphics presented here are composed to emphasize the dual life of this project. The buildings were designed to provide a serene minimalist architectural backdrop to the park’s daily activities. During a performance the buildings take on a new animated life filled with people, sound, and light. The images and graphics presented here are selected and arranged to express this duality as best as can be done in 2 dimensions.

This first phase of the Park’s development is focused on the addition of a new, major outdoor performance venue and festival grounds serving the western suburbs with the ability to become an important regional attraction for the Chicago Metro area.

The buildings are sited to wrap the viewing area in an embrace, as well as providing focus on a view of the Fox River which forms the western edge of the park.  This sense of enclosure provides the venue with a sense of intimacy, though it can hold upwards of 8000 people for a performance or festival.  The buildings are unified by architectural and landscape elements including a cedar slat rain-screen skin that wraps both the structures and the sound wall.  Precast panels are provided at the base of the buildings which are durable, yet maintain the minimalist aesthetic.  Openings are highlighted with panels of stainless steel plates which not only provide durability at vulnerable locations but also add elegant architectural details.

The centerpiece of the composition of buildings is the performance stage.  The performance platform is elevated 5 feet above the audience providing clear sightlines to the seating lawn at the south end of the viewing area. The stage is flanked by 2 wing buildings which house storage, electrical services, office space and performer’s lounge facilities. The wing buildings shape and embrace the stage.  A dramatic roof seemingly floats out over the performance.  Support columns at the front create a proscenium.  To ease loading and unloading of shows, a unique feature was incorporated at the stage.  The back wall folds up to reveal a 5 bay loading dock directly behind the performance space.  Gear can come straight off truck directly onto the stage.  As night falls or performances begin, the stage comes alive with light and color.  The stage wing walls are lit from within with a sophisticated computer controlled LED system, which can be programmed in unlimited combinations of patterns and colors and can be directly tied to the show and music. In this way the architecture dramatically enlarges the show creating an extension of the music.

Complementing the stage building is the Guests Services Building.  This building houses restrooms, concession space, office space, sound systems gear, and a VIP viewing deck.  The building was carefully sited and designed to provide exceptional viewing from the second level.  The upper deck is accessed via stairs and a ramp integrated with the landscape and flanked by the sound wall.  The sound wall is a major architectural piece that links the various buildings and gives the site a sense of enclosure, as well as provides an important acoustic component to the space.  It’s shape and material are designed to block noise from the busy adjacent road and to shape and deflect sound from the stage to avoid disruptive echoes.  This wall also forms a major urban face for the park.  It’s long street side façade announces the park.  Like the stage wing walls it is dramatically lit from within at night, signifying the excitement of the performance to passersby.

The design elements of River Edge Park are balanced in form and function each playing off the other both technologically and aesthetically to create a seamless whole.  It embraces and connects the venue to the neighborhoods flanking the Fox River much like a musician on stage connects with their adoring, loudly cheering fans. 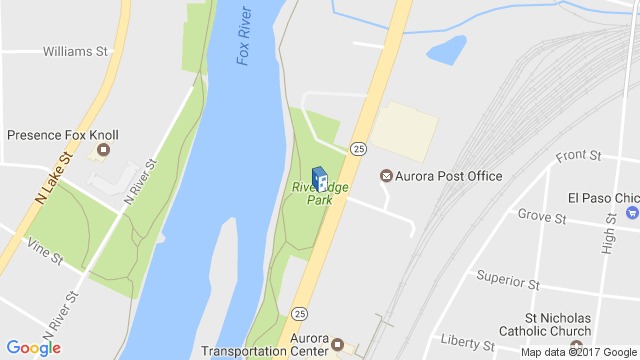