“Three floors in a day is China’s new normal,” says a representative for this 57-floor skyscraper that was built in just 19 days. Known as the “Mini Sky City” tower in Changsha, the 180,000-square-meter mixed-use building was built in record speed with modular, “LEGO-like” blocks. The process also claimed to have required less materials and significantly reduced the amount of air pollution commonly caused by dusty construction sites.

A time-lapse of the construction process, after the break.

Adding to that, the representative claims the building’s interior air is “99.9% pure” due to the built’s tight envelope, built-in air conditioning system and efficient quadruple-pane glass.

The tower is comprised of 19 ten-meter-high atriums, 800 apartments, and office space for 4,000 people. It is part of a larger Sky City complex which is expected to realize a 220-story skyscraper that will reach nearly 840-meters. 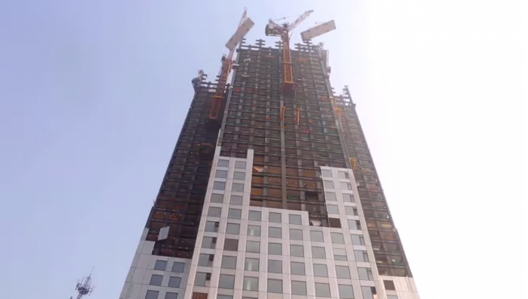