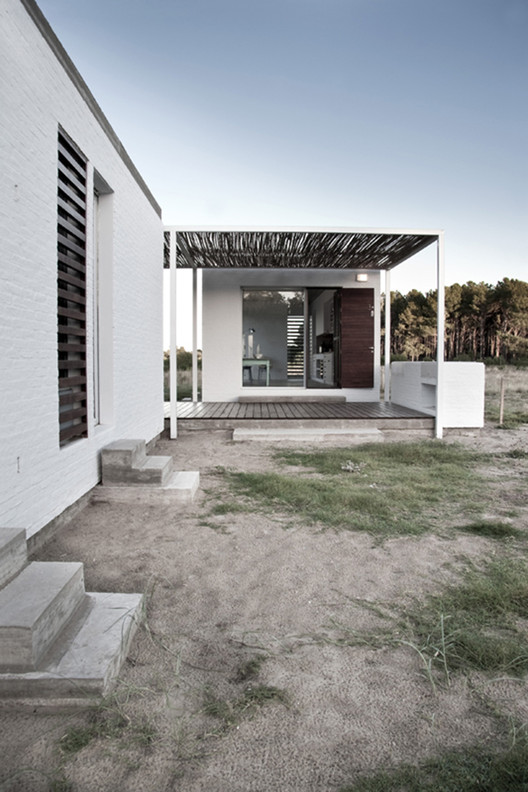 On the Uruguayan bank of the “Río de la Plata” you will find a quiet beach and coastal settlement known as Balneario Zagarzazú; located 7km from the small town of Carmelo. Despite having an international airport and being close by to a gated community and a prestigious five star hotel; It´s infrastructure and general environment is that of an isolated enclave for relaxation and enjoyment for local families. Retaining these characteristics has been of key importance to the people of Balneario Zagarzazú. By maintaining its unique identity, this settlement has more to offer than just another potential tourist spot.

The vegetation that can be found in the area is that common to the “Río de la Plata” banks and composes of “Spartina” scrub, “Gorse”, “Pampas” grass and isolated trees with predominance of “Eucalyptus” and “Pine”. The streets, made of compacted gravel, are wide and understated and give place to a simple lighting system. An abundance of small holiday homes are able to appear isolated within their heterogeneous, not overly large lots and, without solid fences, the large numbers of trees are in charge of suggesting their limits. Mainly of only one-floor, the houses are conceived in a modest style and with a clear predominance of mass over void and a rich use of color. They are mostly self built and predominantly in use during the weekends and holidays. The urban furniture is of an anonymous style. Close to the beach you will find just a few chairs and tables in concrete and an occasional grill under the shade of a eucalyptus. With the minimum of maintenance (only that required before each summer season) and no halo of neglect present, the contagious relaxed atmosphere of this attractive, authentic settlement has been nicknamed by locals: “zagarzuzear”.

The client, a Norwegian professional established in Buenos Aires, married to an Argentinean woman and with two kids, requested the design and construction of a new holiday home. With limited space and a tight budget, the house would be located on a corner lot facing the river.He opened the possibility to reinterpret and modify the commonly used program for this type of house. For him the priority was to make reference to the long traditions of his country of origin: isolated buildings where contact with nature, daily life austerity and functional flexibility are prior to comfort and large room size.

With these premises in mind it was decided that the initial approach to the project would be to divide it in to three independent, yet related, volumes. Thereby reducing the scale of the intervention and matching it with the prevailing environment. Two of these are built volumes: One of them concentrates on the ‘day-time’ activities and is composed of an open room acting as a living, dining and kitchen area, and a bathroom. The other, contains the ‘night-time’ activities, and consists of a master and secondary bedroom, a quest/play room, a bathroom and a storage/laundry hallway. The third volume is a roofed terrace with an open grill EscucharLeer fonéticamente. It is located between the other two volumes, connecting them and establishing formal guidelines for the composition.This central positioning and articulation emphasizes the importance of the exterior expansion in the project and allows the two households to be used almost independently from one another.

The dichotomy between the good orientation and the open views to the river conditions the positioning of the three volumes both within the composition and within the plot. The decision was taken not to align the two built blocks but to open them to the four cardinal points.This favours the correct orientation and increases the experiential and relational wealth between indoor and outdoor. The decision was then made to elevate the home to clearly emphasize the transitions between interior, exterior and the intermediate platform in the gallery.

The formalization of the project aims to combine a simple and limited palette of elements, with some rigor in the resolution of detail and the overall proportion of the: Composite windows, doors, walls, horizontal central symmetry, modulation, repetition.When it comes to the materiality of the project, vernacular materials are chosen. The main structure is made of concrete and hand-made bricks painted white. Inside, the interior walls are made up of several layers of plaster (of different grades of coarseness) and finished white. The floors are of cement and the inner surface of the ceiling shows off the marks of the formwork decking of the concrete. For the bathrooms a limestone is chosen, and a combination of aluminum and wood is used for the windows.

To satisfy the main objectives of this project, particular emphasis was put on analyzing and redefining the typical program of a holiday house, giving it flexibility and adaptability to be used by a variable number of tenants.By understanding the environment and the project which will be inserted in to it, while at the same time synthesizing the elements that define it, help to refine a constructive resolution intending to avoid formal fanfare or common folkloric solutions. 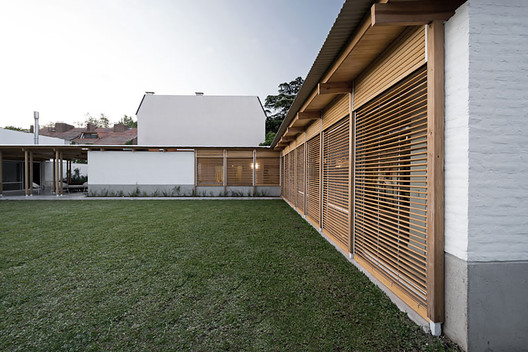