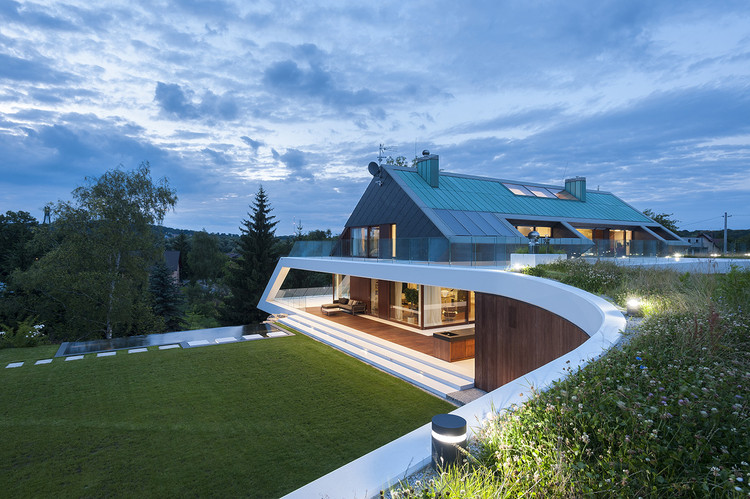 Text description provided by the architects. 8 meters high limestone crag, the remainder of an old stone pit, creates the character of the parcel, which is additionally emphasized by a very interesting panoramic view on the hills surrounding the city. The parcel consists of three levels: the level of green terraces created by means of the building’s project, the arms which create it, parcel where the building’s ground floor is located and parcel below the scarp, where the rest of the garden is.

On the ground where the building was built, very restrictive regulations have to be obliged,which determine aesthetics and parameters of newly built constructions, i.a. minimal roof pitch angle of 37 degrees, obligatory eaves etc., which were both obstacles and inspirations in the phase of creating the concept.

A three storey, single family house was designed with total space of 860 m2. The house was meant to be modern, but not deprived of connections to traditional forms. It was meant to be a hybrid of traditional building, built in accordance with law, and of modern, timeless architectural form.

Soft lines of the white arms of the building from the side of the garage form a closed space of the entrance to the house, from the other side they create swimming-pool space with SPA area, which is opened to the garden. The two parts mentioned before creating the functions of the house join together by means of 18 m long footbridge, overhanging the half-open atrium terrace.