Save
Suo-jae: The House to Uphold Myself / Studio GAON 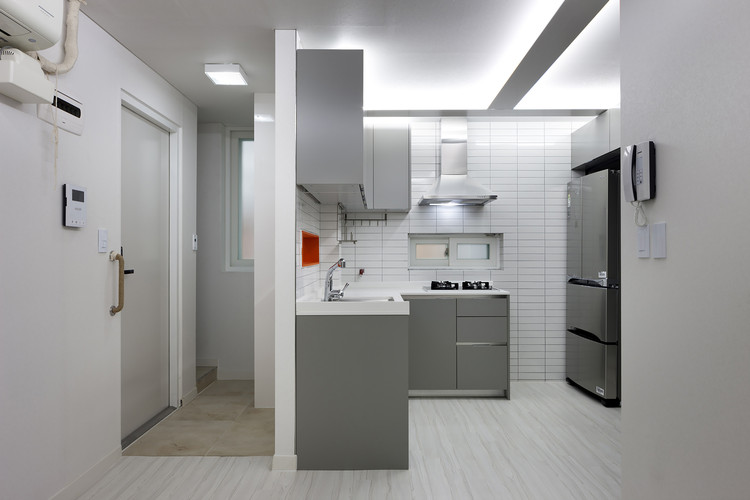 Text description provided by the architects. This building is named 'Suo-jae(守吾齋)', which means 'the house to uphold myself'. The Name 'Suo-jae' belongs to a house of Yak-hyun Jeong - whose brother was Dasan Yak-yong Jeong, one of the greatest scholars in late Choseon dynasty- as well as the title of a prose which was written by the scholar. The prose was written when the scholar visited his brother's house and introspect about his life upon hearing the name. The poem is a masterpiece, making us take a look at ourselves; about the balance between confidence and prudence, and how hard it is to keep uphold ourselves

So I had carved that name on a rock to make a stamp, and it looked great. One day, one of our clients saw the stamp and he asked us to if he could use the name on his house.

The copyright of the name didn't belong to me and it was impossible to ask Yak-yong Jeong, who passed away 200 years ago. Promising to inherit the good will, we decided the name the house 'Suo-jae'.

The building owner's name includes the same letter 'o(吾)' of 'Suo-jae', which means 'I'. 'Uphold myself' has both passive and active meaning; as a passive meaning, not to be influenced by external environment, and as an active meaning, to balance oneself as if walking down the street even with his eyes closed.

'Suo-jae', the house that will keep the client safe, is in the heart of 'Hongdae area', which is one of the most bustling streets in Seoul. 'Hongdae area' points to the neighborhood around Hongik university, famous for the College of Fine Arts. This region went through the most violent change in Seoul. Twenty years ago, there were studios, workrooms, art suppliers, small atmospheric cafes as well as classy houses inside the alley. 'Artistic' atmosphere that filled this area, made people feel attracted since the unfamiliarity made them feel as if they were in a foreign country and in a different period.

People flew in this area to enjoy that atmosphere, but the calm alleys and residential area were soon filled with fast fashion shops, cafes, bars and clubs. The 'artistic atmosphere' was replaced by the new 'Hot Place' full of dark desire and excitement made by numerous people filling the street all day and night.

Meanwhile, this house became the last castaway; bars, clothing stores and restaurants surrounded this house while the neighborhood disappeared.

The owner of 'Suo-jae' had lived in this house since it was a residential area. He watched the change of this town, but still wanted to stay. The existing house was a kind of mixed-use dwelling built 20 years ago, which replaced a single house. At that time, in 1990s, the density of the town rose to meet the demands of housing. Houses for a single family were torned down, and buildings for three, four or more families were built. Those houses usually were finished in red bricks, and the house was also transformed from a single house to a four-story mixed-use dwelling.

Since then, the building became older and older while the owner used the building only for lease. The neighborhood was getting more energetic and joyful, so that the mismatch of the building and neighborhood became apparent. The owner wanted to fix the unpleasant house to return to the town. He was planning to lease the first floor, let his mother live in the second floor, and stay on the third floor and the attic.

The third floor originally had two rooms; living room, and kitchen, but we removed the walls and made the whole floor to one, since the owner was a single man. And we installed new stairs to connect from the third floor to the attic. We evenly distributed the elements for a single family in 50㎡: a simple kitchen, bathroom, washing machine, ironing board, desk, etc.

The second floor for 80-year-old mother is divided into a bedroom, a small living room and a larger kitchen and bathroom. We also put a small room for a nurse, just in case she becomes ill.

The owner enjoys and accepts the energy of Hongdae area, but he wanted to block the noise and light whenever he wanted. So we put design shutter outside the window, and covered the red bricks with a new white wooden panel box.

Lastly, we carved the name 'Suo-jae' on the entrance and the top of the outer wall. 'Suo-jae', the house to keep his life, heart and family safe from the change of the fancy city, was completed.