UNESCO, in collaboration with the Afghan Ministry of Information and Culture, have announced the winning proposal for the Bamiyan Cultural Centre. An Argentina-based team, lead by Carlos Nahuel Recabarren alongside Manuel Alberto Martínez Catalán and Franco Morero, were selected from 1,070 design entries from 117 countries. Prepatory work on implementing their scheme, entitled Descriptive Memory: The Eternal Presence of Absence, "will start immediately" close to the boundaries of the Bamiyan World Heritage site.

See the winning entry and the four runners-up after the break. 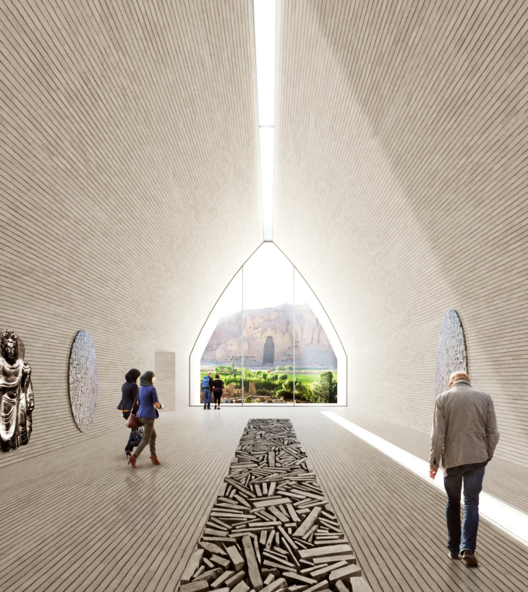 With generous financial support from the Republic of Korea, the Cultural Centre will be realised in a prominent location close to the boundaries of the World Heritage property of the Cultural Landscape and Archaeological Remains of Bamiyan. Although the World Heritage Site is best known for the large standing Buddhas that were destroyed in 2001, "the Cultural Centre is oriented more toward the future, encompassing the multi-layered heritage of Afghanistan’s long history and envisioning the building as a cornerstone in efforts to preserve culture, promote research and build community around culture." The international competition to design the centre marked the first step in this process.

Design proposals had to be centre around the theme of national unity to promote heritage safeguarding, cross-cultural awareness, and cultural identity thereby contributing to the broader aims of reconciliation, peace-building and economic development in Afghanistan. The design also had to complement the physical and historical landscape of Bamiyan, described by UNESCO as a landscape that "bears an exceptional testimony to a cultural tradition in the Central Asian region, which has disappeared." In making its selection, the jury applied design principles emphasising "innovation, facilitation of community, environmental consciousness, and connection to the natural and cultural landscape of the Bamiyan Valley."

Paolo Fontani, director of the UNESCO office in Afghanistan, has said that "this competition was an opportunity to create a new pattern for architecture, design and cultural development in Afghanistan. It is one of our objectives to make sure that the Afghan people recognize themselves in the design concept.”

The winning design was endorsed by the Afghan President, Ashraf Ghani, who acknowledged UNESCO’s competitive selection process and voiced his dedication to protect Afghanistan’s cultural heritage. Following this, it has been announced that the Afghan government will set up a major national culture program whose aim sole will be to value the country’s rich cultural diversity. The program will include a nationwide archaeological survey, a creative industries programs, and targeted activities to safeguard minority rights across the country.

From the architect. The Bamiyan Cultural Centre seeks to create a new vital centre for communicating and sharing ideas.  Therefore, our proposal tries to create not an object-building but rather a meeting place; a system of negative spaces where the impressive landscape of the Buddha Cliffs intertwine with the rich cultural activity that the centre will foster.  The Bamiyan Cultural Centre then is not a built but rather ‘found’ or ‘discovered’ by carving it out of the ground.  This primordial architectural strategy creates a minimal impact building that fully integrates into the landscape, takes advantage of thermal inertia and insulation of the ground and gives a nod to the ancient local building traditions.

The jury identified "exceptional qualities" in this winning entry: "a well-conceived plan providing for all program elements as well as a separation of public/exhibition and research/educational activities; a very sensitive site strategy that produced an elegant entry sequence and minimal visual impact on the site, integrating the building as part of a larger garden strategy, and the suggestion of brick construction that would be expressed on the interior spaces of the building, creating elegant passageways that could easily serve as informal or formal meeting spaces and additional informal gallery spaces. They also found the project to be an appropriately scaled project, and with careful design development, would be a very buildable project."

From the architect. The idea of unity is enhanced by simplicity and silence. We propose simplicity in terms of the entire architecture, a vital compression, in which the hawli along an outward structure is proposed as a starting point for future adaptation and extension. It is a bare-architecture, a backbone-architecture to be filled with life; an abstract, undecorated, non-imposing architecture which leaves freedom to its users as to how to use and transform the edifice into the cultural centre of collective will.

Simplicity rather than excess is foreseen in terms of construction. Given that funds are extremely valuable and limited, in a context of social conflict and deep economic suffering, we propose a straightforward construction based on 3 materials: concrete for the structure to span large & flexible spaces; locally produced baked brick as the main building material belonging to this place and sustaining local economy, ecology, and tradition; and local stone for a refined flooring fit for a cultural centre this nature.

From the architect. The Bamiyan Cultural Centre (BCC) is comprised of rich and fascinating program elements integrated into a site which is remarkable both for its landscape and its history. Our project aims to honor and promote the sharing of this preeminent cultural, landscape and historic heritage, even as it provides the Afghan community in Bamiyan and its visitors an exciting and powerful tool for the collective writing of history to come.

The BCC program is organized like a village – buildings (“program blocks”) are arranged around interior streets (walkways and views toward the near, medium and faroff landscape). Situated in the prolongation of the existing urban network (police and TV station), the project preserves built continuity. Although the BCC facilities in the vicinity are obviously incomparable, the “program-blocks” are of a scale close to the pre-existing buildings and fit harmoniously into the context.

From the architect. This proposal looks at the notion of culture beyond the poetic explanations that were embedded by different approaches and to read it means to understand it within social and political context. Bamiyan as a post-traumatic city has experienced political conflicts that have dominated its physical environment. The cultural voids of such trauma are embodied not only within the memory of its people but exist as the absence of “cultural space”. Although often romanticised, this suggests that the notion of culture is something more than social and the claim of it can become the apparatus for political conflict. The Buddha Cliffs, are such examples in which the productive space of culture is marked with the absence of its main treasures, the Buddha Statues.

Taking into consideration four main artefacts that are part of Bamiyan’s local environment the Cultural Centre is proposed as an archipelago of these elements, creating a new way of reading both the historical monument of the Buddha Cliff and the entire city. These elements are: firstly, the walls as physical borders that frame their housing units.  Secondly, the plantations that create a mosaic that re-defines the landscape. Thirdly the “invisible” but yet formal passages that are found in the surrounded area that also re-configure the city’s DNA and finally the cliff as an element of both natural and artificial context.

From the architect. The project is composed by a series of carved out rammed earth walls that emerge from the ground. The rich materiality of the walls reflect the landscape, fusing the monolithic forms with the environment.  Each wall is abstract in form and defined only internally by a series of carved out niches, enclaves, passages and services that serve as the infrastructure for the cultural centre.

The walls take this form and earthly appearance as not to compete with the program of the cultural centre. Staged between the walls are spaces for performance and exhibition, working and research. The architecture in between is open, maintaining views over the Bamiyan valley, and framing discourse between programmatic adjacencies. This architecture lends itself to the living walls and the cliffs where the buddhas once sat. It does not try to compete with nature and with itself, but exists only for the people as a way to stage their cultures.