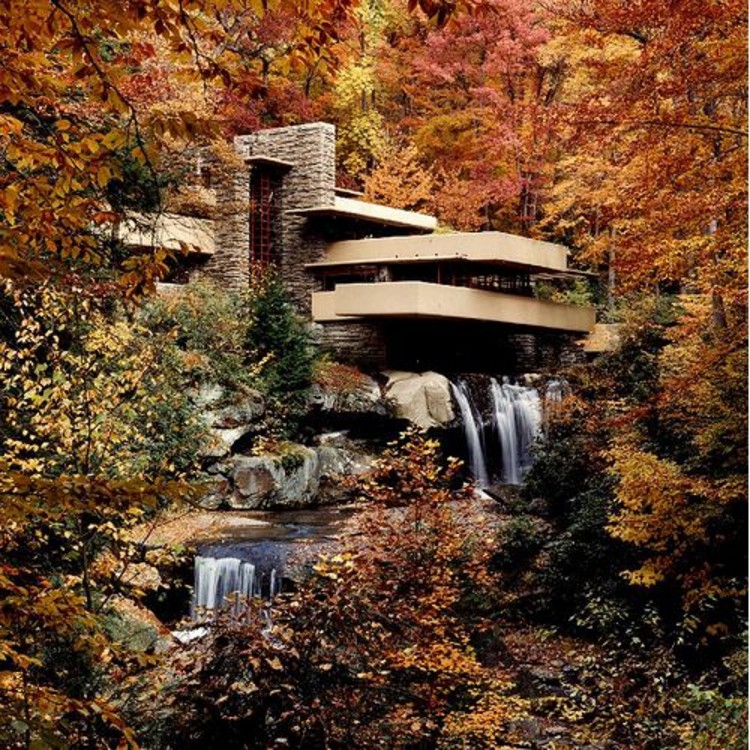 Text description provided by the architects. In Mill Run, Pennsylvania in the Bear Run Nature Reserve where a stream flows at 1298 feet above sea level and suddenly breaks to fall at 30 feet, Frank Lloyd Wright designed an extraordinary house known as Fallingwater that redefined the relationship between man, architecture, and nature. The house was built as a weekend home for owners Mr. Edgar Kaufmann, his wife, and their son, whom he developed a friendship with through their son who was studying at Wright's school, the Taliesin Fellowship.

The waterfall had been the family's retreat for fifteen years and when they commissioned Wright to design the house they envisioned one across from the waterfall, so that they could have it in their view. Instead, Wright integrated the design of the house with the waterfall itself, placing it right on top of it to make it a part of the Kaufmanns' lives.

The house was meant to compliment its site while still competing with the drama of the falls and their endless sounds of crashing water. The power of the falls is always felt, not visually but through sound, as the breaking water could constantly be heard throughout the entire house.

Wright revolved the design of the house around the fireplace, the hearth of the home which he considered to be the gathering place for the family. Here a rock cuts into the fireplace, physically bringing in the waterfall into the house. He also brings notice to this concept by dramatically extending the chimney upwards to make it the highest point on the exterior of the house.

Fallingwater consists of two parts: The main house of the clients which was built between 1936-1938, and the guest room which was completed in 1939. The original house contains simple rooms furnished by Wright himself, with an open living room and compact kitchen on the first floor, and three small bedrooms located on the second floor. The third floor was the location of the study and bedroom of Edgar Jr., the Kaufmann's son.The rooms all relate towards the house's natural surroundings, and the living room even has steps that lead directly into the water below.

The circulation through the house consists of dark, narrow passageways, intended this way so that people experience a feeling of compression when compared to that of expansion the closer they get to the outdoors. The ceilings of the rooms are low, reaching only up to 6'4" in some places, in order to direct the eye horizontally to look outside. The beauty of these spaces is found in their extensions towards nature, done with long cantilevered terraces. Shooting out at a series of right angles, the terraces add an element of sculpture to the houses aside from their function.

The terraces form a complex, overriding horizontal force with their protrusions that liberated space with their risen planes parallel to the ground. In order to support them, Wright worked with engineers Mendel Glickman and William Wesley Peters. Their solution was in the materials.

The house took on "a definite masonry form" that related to the site, and for the terraces they decided on a reinforced-concrete structure. It was Wright's first time working with concrete for residences and though at first he did not have much interest in the material, it had the flexibility to be cast into any shape, and when reinforced with steel it gained an extraordinary tensile strength.

The exterior of Fallingwater enforces a strong horizontal pattern with the bricks and long terraces. The windows on the facade have also have a special condition where they open up at the corners, breaking the box of the house and opening it to the vast outdoors.

The perfection of these details perfected the house itself, and even though the house tends to have structural problems that need constant maintenance due to its location, there is no question that Fallingwater, now a National Historic Landmark, is a work of genius. From its daring cantilevers to its corner window detail and constant sound of the waterfall, Fallingwater is the physical and spiritual occurence of man and architecture in harmony with nature. All you have to do is listen. 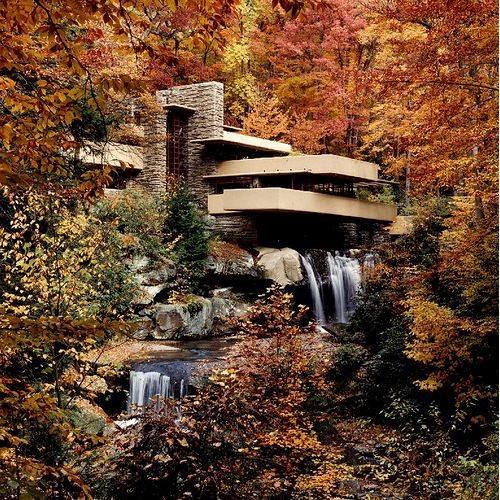