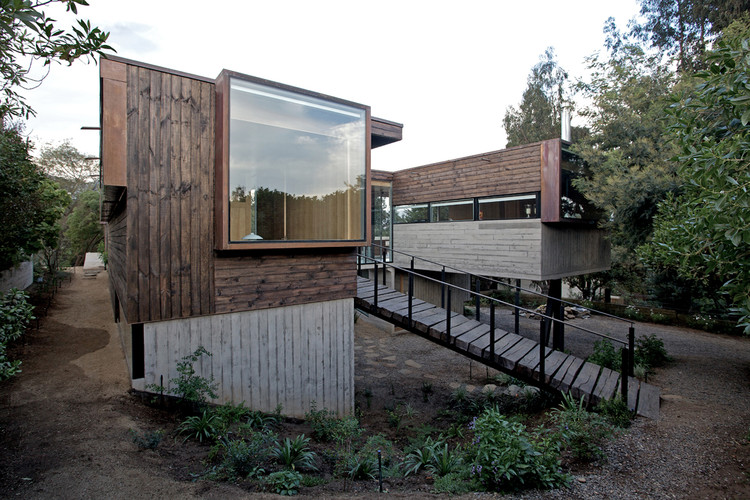 Text description provided by the architects. Not having a direct view of the ocean allowed us to place this weekend house facing a less expected landscape. The open panorama of the Pacific Ocean has been replaced by an enclosed orientation towards a group of trees and the coastal hills of the east. These preexisting conditions characterized the site as a contained backyard, which appeared to be an ideal situation to take distance from the life of the beach. The requirements of the brief were defined by the “minimum” needs of a large family, indicating that if the program was built in one single volume there would be little open space; something undesirable due to the qualities of the site.

The plot is divided in five parallel strips, occupying the site in its full length. The distance with the neighbors is given by the local norm, which requires having 2 strips of gardens, one towards the north and the other towards the south. The interior programs of the house are organized in two bars, divided by a third strip of garden of four meters of width. This scheme of garden-house-garden-house-garden alternates interior and exterior spaces, which are placed in different levels of the topography so that the roof of one volume can be use as a terrace by the volume above. This simple fragmentation of site and program, and the definition of different levels, produces equivalence between inside and outside spaces; parallel interior and exterior connections: encouraging a more casual life in the outdoors.

During the winter the number of inhabitants diminishes, the temperatures are lower and the house adopts a more introverted lifestyle. Splitting the program allows to close the lower levels used by the guests on the summer, and keep open only the second floor. The house, acquiring the rhythms of a weekend refuge, absorbs the seasonal variations on the intensity of the program, which define a silent winter –inside- and an agitated summer –outside-.

The two levels of the house are built establishing a contrast between a solid podium and a light roof structure. The podium; a concrete platform which attaches the house to the irregular topography, while the roof; built in steel and wood generates a lighter structure that frames specific aspects of the landscape. 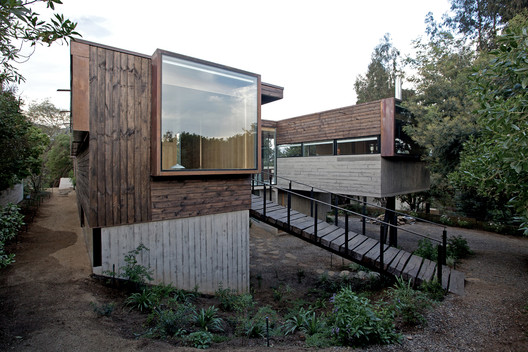