Last week, Frank Gehry inaugurated his first building in Australia, with the formal opening of the Dr Chau Chak Wing Building at the University of Technology in Sydney (UTS). As his first in the country, the building therefore offers an opportunity for a whole new corner of the world to weigh in with their opinions on the polarizing style of the world's foremost love-him-or-hate-him architect.

The resulting media flurry has provided a number of entertaining responses, both positive and negative. After the break, we round up some of the most amusing.

We'd best get this one out of the way early. Yes, it looks like a paper bag. In her review, Sydney Morning Herald architecture critic Elizabeth Farrelly writes "I had no idea, in first likening the UTS Business School to a brown-paper-bag-karate-chopped-in-the-middle in 2011, that it'd become such a meme."

Although she may have helped popularize it, Farrelly was certainly not the originator of this meme - online, its earliest appearance online actually comes on December 17th, 2010 (just a day after the design was unveiled), both in a comment on the Skyscraper City forums and as the title of a video posted by Farrelly's own paper, the Sydney Morning Herald, although the video itself has since been removed.

Regardless of its origin, it looks like the "Paper Bag Building" moniker is here to stay. Gehry himself says "maybe it’s a brown paper bag, but it is flexible on the inside. There’s a lot of room for change and movement which I think in the world today is essential." At the opening ceremony, Governor-General Sir Peter Cosgrove claimed it was "the most beautiful squashed brown paper bag I've ever seen."

But for Farrelly, paper-bag-ness is certainly a bad thing: "a friend this week made it an "airline sick-bag, karate chopped," which is funny, if grim," she says. It seems that, despite definitely looking like a bag, nobody can quite agree on whether this is good or bad - perhaps ArchDaily might humbly suggest that saying a building looks like something that isn't a building isn't a particularly useful form of criticism.

3. "A masterpiece to rival the Sydney Opera House in distinctiveness" - referenced by an anonymous writer for the Australian Associated Press

If ever there was a warning about the dangers of internet anonymity, this might just be it. Appearing in the Guardian as well as a handful of other outlets, the full quote from our unknown author reads: "The Dr Chau Chak Wing building, which will house a new business school in the inner-city campus, is being hailed as a masterpiece to rival the Sydney Opera House in distinctiveness."

They might be referencing this article from the Epoch Times, in which Ross Milbourne says "We've got the Opera House, and it's hard to say we are going to beat that, but from what I've seen we'll have an equally outstanding icon at this end of Sydney." However, it should probably be noted that Ross Milbourne is the Vice-Chancellor of UTS, the article was written in 2010 before the design was even complete, and that Frank Gehry quickly interjected that "We don't want to beat that."

Since the completion of the building, exactly zero people have "hailed it as a masterpiece to rival the Sydney Opera House in distinctiveness," at least not in public. The lesson here: don't believe everything you read on the internet.

2. It "has a face, possibly an armpit as well, and looks like it could give you a nice, warm hug if you let it" - Jackson Stiles, The New Daily

Building - rather creatively - on Gehry's sentiment that most modern buildings are "faceless," this quote from Stiles doesn't make all that much more sense in context. But he refrains from calling the building a paper bag, which is something; instead, the new building is "a bag of skin," apparently.

And so we return to Farrelly, who - ever at the avant-garde edge of architecture criticism - has now dropped the paper bag tag in favor of a more substantial comparison. "The pomp, the market, the infantile love of curvy comfort-tecture: crowd-pleasers all, in the voluptuous Kardashian mould," she writes. "Indeed, that peachy arse, polished to 'break the internet', represents the reigning orthodoxy of our time."

"But if, like me, you suspect there's more to life than unbridled market-forces, more to literature than Fifty Shades, more to architecture than the whackiest curves your software can spew up, more to beauty than two oiled and opulent orbs – this 'more', surely, is something our houses of higher learning should pursue."

That comparison now firmly established, she asks "If it's an arse, is it a good 'un?"

Spoiler alert: she doesn't think so.

It may not be particularly amusing, but for those who prefer more balanced evaluations to the point-scoring of Farrelly and others, you could do worse than Balch's project overview for ArchitectureAU. Confessing that she "approached it with scepticism, arriving with a desire to dislike it," she finds things to both like and dislike.

Principle among those things to dislike is the brick facade, which was supposedly designed to "help form an urban relationship with the other large brick structures that dot the Ultimo landscape," she explains. "Yet with the neighbourhood developing rapidly, this may end as more of a nod to a past material condition than a means of aesthetic urban integration. The building is a map of Gehry’s personal budgetary hierarchy, advancing experimental programmatic and structural feats, prioritising features over finishes."

But there is some good in the design as well: "While the treehouse analogy Gehry originally proposed to UTS now seems a little loose, the idea of the architecture working to facilitate social engagement is born out in the building. In plan, the program forms a loose radius of stacked shapes, enabling fluid movement between and around rooms, which are wrapped externally in the infamous 'brown paper bag' brickwork. The resulting interstitial pockets, edges and voids make for a fractured network of social and collaborative spaces." 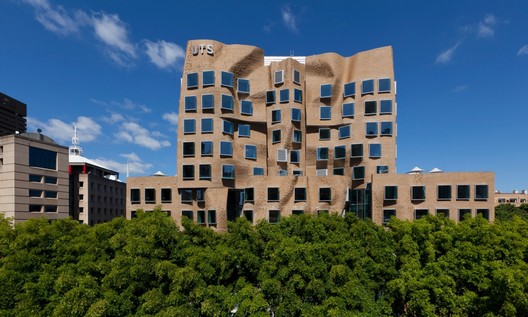