The latest competition entry, "Gate 2 Tower" from Pichler & Traupmann Architekten examines the relationship formed between a high-rise building and its local and global surroundings to create a cohesive design that bridges the problematic gap between these different scales. Employing unconventional methods, Gate 2 Tower features geometries that not only create unique interactions, but also inform each other. 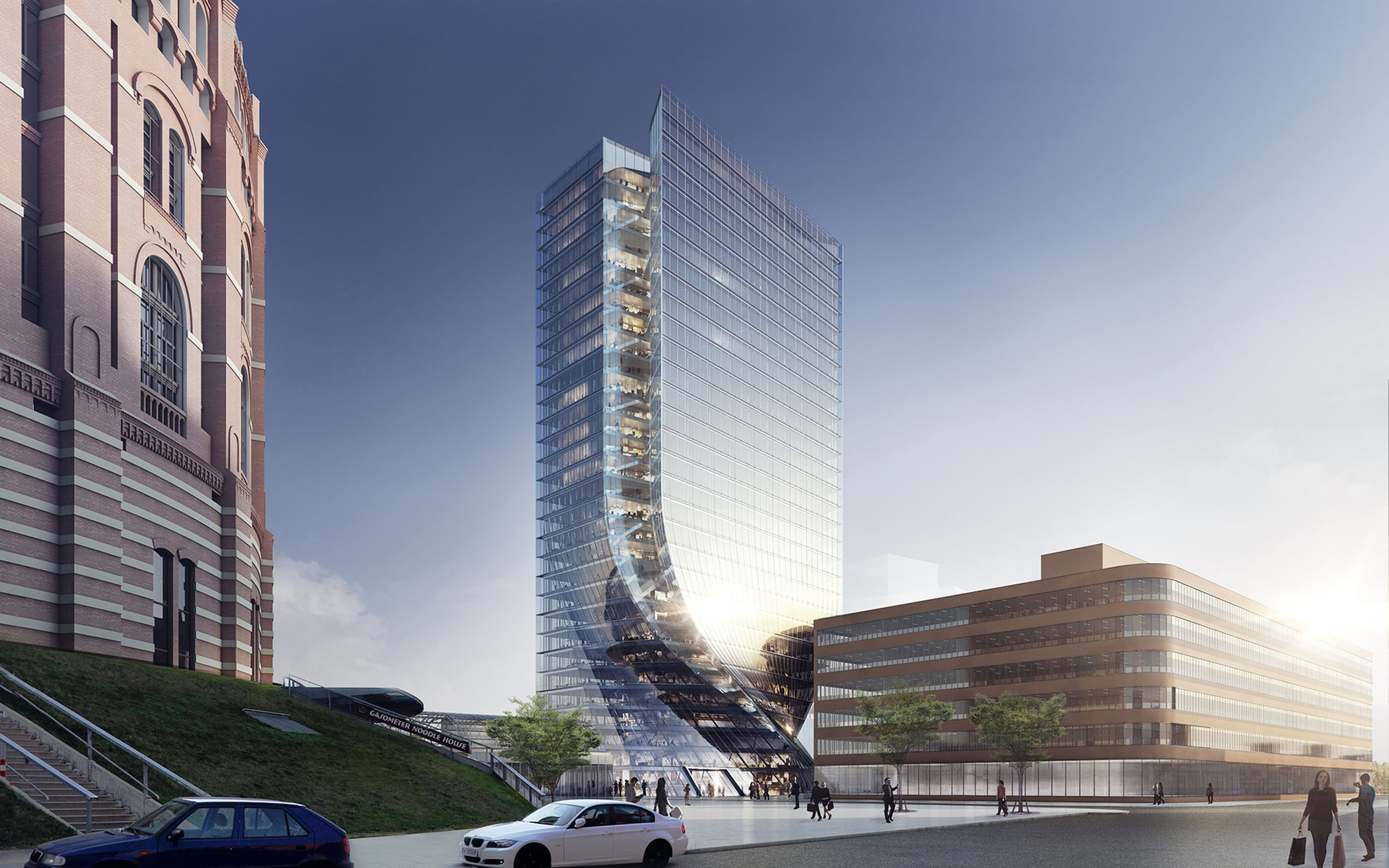 Using nearby main streets and features, particularly a railway, Gate 2 Tower speaks to its locality, fitting neatly within existing city contours rather than combatting them. At the global scale, defined by the architects as the relationship "particularly tall buildings establish with an entire part of the city," a secondary axis is created. This axis runs diagonally through the building site, reaching toward a surrounding metro station and highlighting the area's circulatory function at the pedestrian level. More specifically, the diagonal axis relates the structure to a development to the north, as well as highlights views of the nearby gasometers.

Using these site features as a guide, the main project goals for Gate 2 Tower presented themselves as follows:

Using these seemingly conflicting design goals, Gate 2 Tower is a hybrid of geometries, as the rigid south-side follows the strict language of the streets' alignment, while the fluid northwest facade bends in response to the gasometers' visibility. This feature lends to an outdoor restaurant area, due to the curvature widening the diagonal pedestrian zone and significantly reducing wind through the space. To achieve the goal of maximized floor area, the northeast facade folds in response to the diagonal axis, generating a large slit through the structure which lends itself to open-air balconies at each floor. The depth of these perforations also allows for almost immediate views of the gasometers from inside the tower, establishing a sense of identity with its surroundings.

The north facade consists of triple-pane thermal glazing panels in triangular patterns to generate the distinctive curve without the need for more costly curved glass. The other facades are composed of double-layer glazing, which provides not only shading capabilities from the hot summer sun, but also allows collection of solar heat in the winter for distribution throughout the building. Some of the outer glazing on the southwest facade can be opened outwards, creating an occupiable space between the facade's layers, known as "winter gardens."

Similarly, the arrangement of the floor plans lends to a flexible program. Each of the upper floors is grounded by a central structural core, which houses the main circulation, allowing its accessibility regardless of the floors' layouts. This format allows customizable office and apartment sizes to cater to the occupants' needs. Additionally, the building services are housed in the central core, further expanding the usable floor area and the options for reconfiguration.