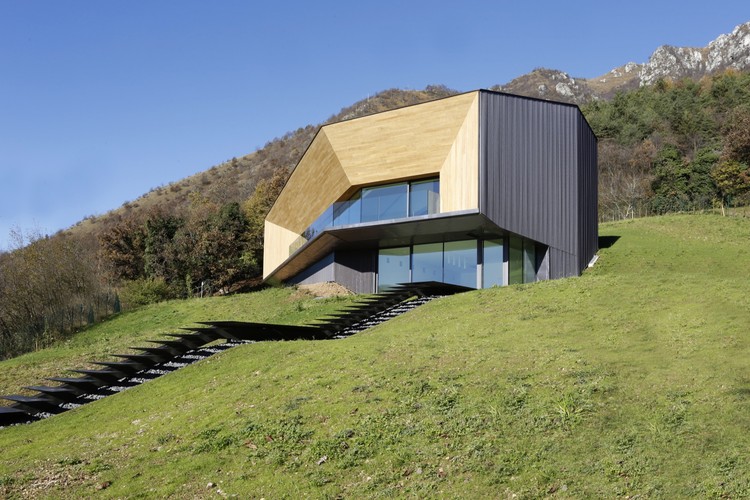 The house stands on a clearing in the trees, 700 meters above sea level, close to the "Passo del Cavallo", next to a road that connects Trompia Valley and Sabbia Valley on a steep slope. The landscape is characterized by an open valley to the south and a frame of green mountains with peaks of dolomite rock to the north. We are still in a place close to the urban noise but at the same time far away, where the aroma of mountain herbs and grazing sheep seem to have stopped time; and this determines which condition founding: a primary relationship between the artificial intervention and nature. The relationship with the ground and the landscape are the material that construct the project: the ground by communicating with the project operates a principle of "rootedness" into the slope to the north, where the house seems to bite the mountain, and the principle of "emancipation "to the south, with an overhang that throw the home to the valley.

To the north, a courtyard open to the Mount allows you to look at the profile of the dolomite rock spiers that at 1200 m above sea level continues the green plane tilted so that virtually close the fourth side of the house. To the south a large window splayed mediates between the interior of the living and landscape, the light coming from the south continued with a bay window to the north patio. Lightweight, integration at the site, opening and closing, no exhibitionism, connection to foundational principle generated by the performance of the ground and the internal organization of space, producing an idea of domestic that offers a contemporary housing responsive to the site. These are the elements that make up the set, with a will of harmony and tension, looking for an architectural shape by the strong expressive intensity, but at the same time a shape of balance and rooting in the use of natural materials such as oxidized copper and wood.

The house has an irregular plan shaped like a "C" with a patio where the fourth side is made from a green plane that delivers the planimetric structure that generates the spaces of the house, creating three bodies with variable height increasing from north-west, where the volume disappears by integrating into the ground. The first body has three bedrooms, two of them with windows facing the patio, through the bathroom; while the third bedroom has a subtracting that opens the master bedroom and its bathroom to the west into the clearing. To the south of the second body with a height between 3.50 and 4.50 meters introduces the living room, and open space suspended between the patio and landscape. Its side closed is characterized by the presence of a fireplace that ends with the same size of the south window.

The living room continues with the dining area, to the east with the double height body: a continuous space, characterized by a structured cover consists by triangular planes, inside which is recessed the continuous lighting system. The highest part of the body in the east is characterized by a loft under which it has the kitchen opens to the patio, while above it there is a space for the study. It creates an integrated fluid area and open to the outside, simultaneously protected, almost closed on the east and west sides (where they open the window as an excavation of the room and bathroom).

Important the levels of access. The main, covered by the overhang of three meters of living, is placed in the to the south-east. Upon entering there is a ramp parallel to a great room with fireplace. Here goes a ladder to the dining room level and then to the mezzanine, where a skylight opens to the sky at north. Access by road has two possibilities. A driveway with covered ramp leading cars in the underground, which is one level below the main floor access. The pedestrian access is constituted by a suspended linear scale made of steel, from the road a space covered leads to the entry level.

An elevator connects the level of the garage with that of the living. Spaces and service areas are located in the basement. The house looks like in his primary relationship with the landscape without other artificial elements other than the suspended staircase that cuts the grass slope. Geothermal system, heat pump, ventilated walls, creating a natural ventilation even though the deep walls (65 cm) that protect against cold and heat (energy italian rating higher than A cened) help to build a house with very low heating costs, almost to consumption and zero pollution. We wanted an environmentally friendly home in the building materials and insulation, equipped with ventilated walls, a sustainable home in the settlement balance with the landscape.

Green meadows and trees framing the outer coating in corrugated oxide copper and Accoya wood (patented of undeformable wood of New Zealand pine replanted forest), the only elements that, with the triple room glass, are the artifice in counterpoint that interacts with nature. The ventilated wall copper is modulated with a slight pleating to vibrate the light on the non-reflecting surface. The wood of the great splay reflects light that is refracted from the south. The patio flooring made in iroko wood, the large windows integrated into the copper coating defines a space that is enhanced by a green maple that brings in a piece of nature, are not material around which you orient the house. Inside, the floors are made of resin sand-colored, the walls are in plasterboard painted white and ceilings with recessed lights in the graft cut from the slab-wall, parapet are in glass and the windows made of painted iron have the objective of exalting the space and its continuity, favoring the integration to the site. 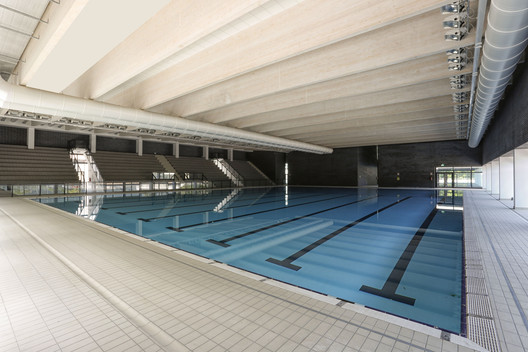