Save
House in Hikone / Tato Architects 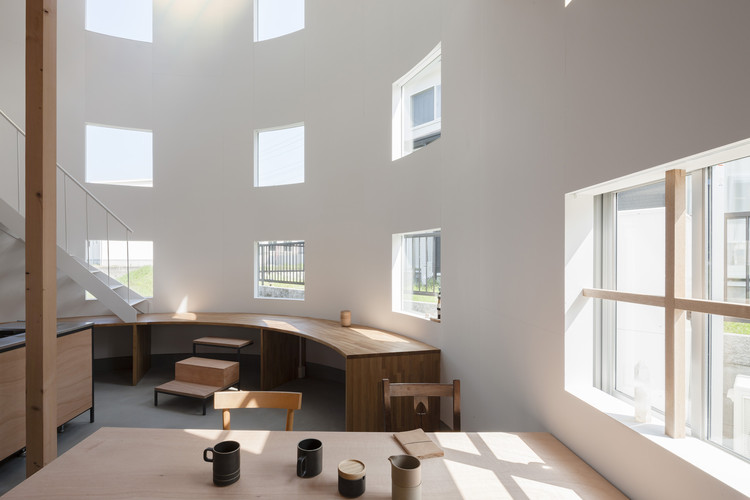 Text description provided by the architects. We have designed many landings. It is a place floating in the air, from which you can look back to where you were just before, and look forward to where you will go. House in Kawanishi, which was completed before this house, was also architecture of landing.

Most important there was that the space for landing was slightly bigger than usual. It belonged to neither the ground floor nor the first floor. The level of the first floor has been adjusted to function as a desk sitting over it. It showed the position of architecture that tried to keep a little distance from the interior and the exterior.

As well as House in Kawanishi, intentional division of stairs makes a landing in this house, floating delicately 750mm above the floor. We tried to represent this ambiguous feeling of belonging to neither of the floors not by actual landing, but by other manipulation such as window arrangement. While they have a conventional scale, the size of the opening is easy to be manipulated, as they are not restricted by scale of physical bodies.

In House in Hieidaira, utilizing the conventional image of barns, we tried to make archetypal houses look smaller than their actual size. In this house, we placed three rows of windows equally, expecting to bring a scale gap in its size, and a mystical feeling of floating, which is similar to the one felt on landings.

“House in Hikone” is a single family house for a young couple and their children in Hikone, Shiga. A  residential area so far existing of mainly grassland, but soon to be occupied by ready built houses. The challenge was to seek a proper built form there, which will resolve any surrounding environment, keeping the memory of grassland.

It resulted in the white oval cylinder with forty-two windows, in which wooden boxes and a floor were inserted to create a living space. It was placed diagonally in the site, remaining space between adjoining houses. Many windows segment the view and make the façade work as a filter. In this way, the house is ready for any change in the surrounding environment. Curiously enough, invisible parts were supplemented suitably, and a certain type of transparency appeared.

The outer wall, on which windows are placed equally, mediate a variety of living issues, while it is independent from them. It appears as if it is renovated from the building for a different use, which we expected to bring a certain type of fresh quality of ruins to this house.