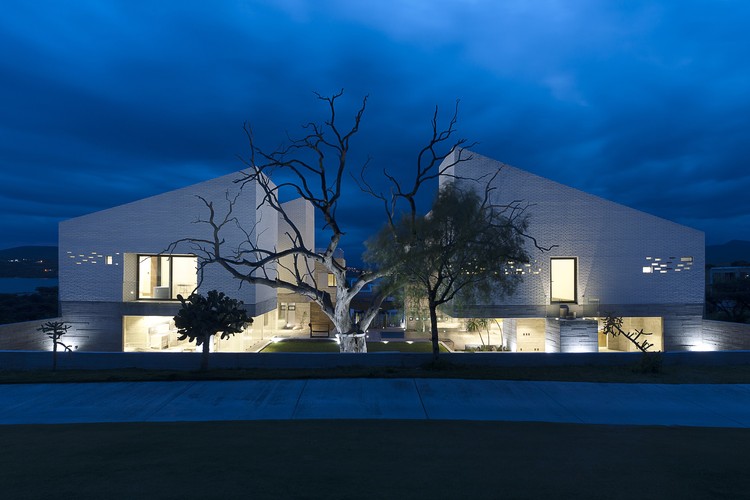 Text description provided by the architects. The site: two lots of 14 meters wide by 36 meters deep (504 m2) each with their rear facing north. The site has a drop of 4 meters from the front to the back in a continuous slope.

Restrictions: the code restricts free areas of 6 meters at the front overlooking the lake, 7 meters at the back adjacent to the golf course, and 5 meters along the lateral party wall.

Requirements: DASA house should have free and continuous spaces, a complete physical and visual communication with the outside areas, a full bedroom with separate access from the house and an entertainment area upstairs that should be linked with all the spaces of the house. Materially the house would have to be very simple and minimal, with the use of steel, concrete and glass as exposed, predominant finishes.

On the other hand, DATRI house required larger spaces and unlike its neighboring sister home DASA, these were to be partitioned and differentiated from each other, it was important that the spatial experience of the house were to be discovered when crossing it. In this case they demanded that the interior finishes were not to be exposed, and should be mostly covered with simple materials.

The challenge: to design two weekend houses for two brothers with different tastes and requirements but with one common goal: to share the outdoor areas. DASA House would contribute to the synergy of the terrace area - the grill, while DATRI House would share the pool area and cellar.

The proposal: to design a project with two houses.

Under this premise, the starting point was to take as main variables the sunlight, the prevailing winds, the topography and the common program: the pool and the terrace. These should be located in the central part of both sites. In parallel, we chose to take as a reference the volumetric scheme of a traditional house with a gabled roof.

Having analyzed the variables, we decided to divide symmetrically the initial volumetric scheme. Then each volume was moved to the opposite end on the side of each site, leading to the creation of a central courtyard.

As a result and in order to customize the houses to the needs and tastes of each brother, we proceeded to develop architecturally each volume. We used very simple operations (stretching, subtracting, separating, dividing) to help us conserve as much of the initial scheme as possible, but with the end result defining the volume and spatial experience.

These operations not only defined the interior space of the houses, we also searched to shape the space between them (common area). This was achieved by creating cantilevers in the volumes of the second levels of both houses while manipulating the topography at the same time, by generating four terraces to absorb and exploit the natural slope.

The first is the access and garage level, the second is a contemplative desert garden, the third is the common level for both houses. It is a continuous surface that forms the terrace of each house connected at the center by a pool covered with the same stone material, achieving a physical and visual continuity from one house to another that intentionally blurs the obvious trench of the pool. Finally, a garden area in the back of the houses gives continuity to the green carpet of the golf course.

Materially and with the intention of obeying the structural conditions, we sought the ground floor of both houses out of exposed concrete. This facilitated the first level as a continuous part of the foundation, opposed to the forces of gravity generated by the cantilever in the second levels of both houses. The volumes of the second levels are a series of closed and solid trapezoidal bodies made entirely of exposed brick. 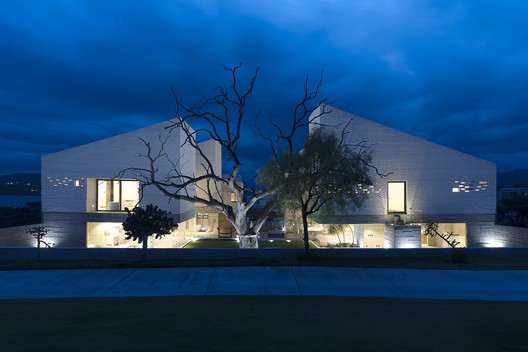