The United States’ diplomatic presence in Cuba is housed in a severe, early-1950s office building perched on the shoreline over Havana Bay. Walled off from the city and pulled back from the street, the building has the uneasy presence of a haunted castle – shunned and maligned by its neighbors, but subjected to the unending scrutiny of suspicious eyes and intrigued gossip of the locals. With its regimented orthogonalities and the unmistakably foreign imprint of modernist efficiencies, both the embassy's architecture and the optimistic political spirit it embodies seem to belong to another era, a cooperative past no longer conceivable in the wake of a half century of underhanded diplomacy, calumnious propaganda, and failed attempts to restore relations between the embattled countries. 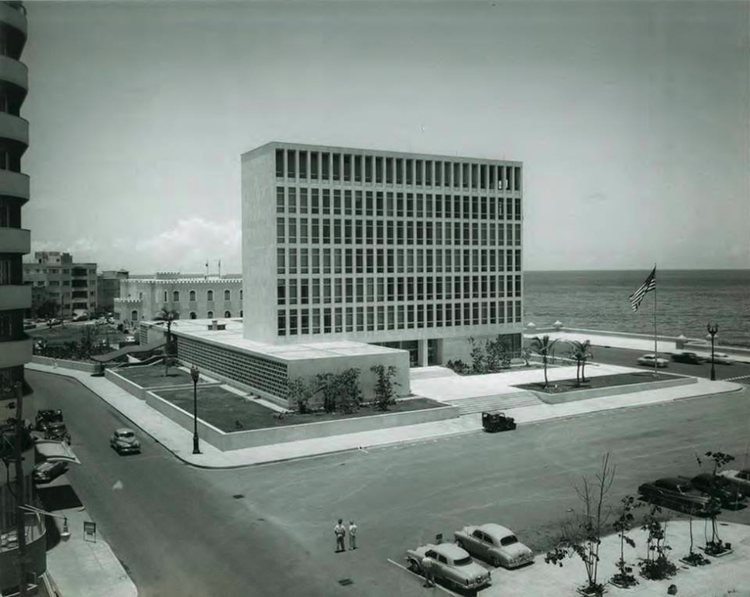 Designed in 1950 by the renowned team of Wallace Harrison and Max Abramovitz, architects of the CIA Headquarters at Langley and a host of other civic projects, the embassy was completed to great critical acclaim in 1953. It earned a prominent place that same year in an exhibition on “Architecture for the State Department” at the Museum of Modern Art, alongside another consulate by the duo in Rio de Jainero and seven other embassies from around the world. The scheme in Havana was simple and elegant: a sprawling ground floor level with two courtyard patios that contained information, visa, and consular desks, and a setback office tower that housed diplomatic offices and bases of operations for more sensitive government missions. [1] Clad in imported travertine panels, the embassy's clean lines and simple rectangular geometries epitomized both the industrial aesthetic of International Style modernism and the seemingly inescapable influence of encroaching American culture.

Not only did the appearance of the building exude an imperialist presence, but so too did its conception and construction. In order to work off their leftover debts from the Second World War, several European countries contributed to the financing of the embassy through the provision of raw materials and direct monetary support. The travertine façade, for example, was provided by the Italian government, while other materials were exported from France, Belgium, and England in order to reduce those countries’ debt burdens. [2]

True to its name, the appeal of International Style modernism had little to do with a concern for regional sensitivity or local conditions. Its theoretical origins as a universal architecture of standardized mass production generally precluded the necessity (and sometimes the capacity) of contextual adaptation at the project level. Accordingly, while Harrison and Abramovitz displayed a token amount of interest in the building’s immediate environs, it was only as an afterthought to the larger design concept, and early attempts at environmental tuning were met with mixed results. For example, the architects aligned the thin office block on a north-south axis, hoping to intercept the strong east-west winds of the shoreline through large operable windows. [3] Well intended though they were, the actual ability of these windows to ventilate the building and offset the searing greenhouse effect of the glass facades was minimal and unreliable, ultimately leading to an extensive mechanical and material renovation in 1997. [4]

It is no coincidence that the building bears a remarkable resemblance to another, more famous house of diplomacy. While the architecture of the United Nations Secretariat Building in New York (1952) has often been attributed to Niemeyer and Le Corbusier, two of the giants behind its design, it was actually Harrison that was placed in charge of the international collaboration. Like the embassy in Havana, the Secretariat has an oblong, rectangular footprint aligned along a north-south axis. Windows cover the east and west facades; while solid, light-colored panels cover the north, south, and uppermost profiles. The result is the form of a capital pi (Π), heavily outlined and infilled with glass, a scheme that has since been redeployed in projects around the world. [5] Although the UN prototype was primarily the brainchild of Niemeyer—who used the scheme to great success five years later in Brasilia—its success as a model was undoubtedly appreciated and borrowed by Harrison in Havana.

The calculated decision to build the embassy in this particular style had important cultural meaning in the context of the broader, global political climate. Modernism deliberately represented the political values that the United States hoped would inspire the world to follow in its lead: a promise of prosperity and opportunity through the mechanisms of technology and industrialization. In the context of the Cold War, it was equally important that the classicism of prewar Soviet embassy architecture reflected a dialectic opposition to this philosophy: one of imperialist monumentality, intimidation, and grandeur. [6] Although Soviet architecture abroad eventually made an about-face to align more congruently with its proletarian values, for the time being, these contrasting approaches defined one of the Cold War’s more intriguing and prolific cultural battlefields.

Due to external political and military circumstances, this appeal to ideology through architectural mechanisms was ultimately unsuccessful for the United States, and the building’s role as an official embassy was short-lived. The Cuban Revolution of 1959 and Fidel Castro’s installation of a Soviet-aligned communist government led to the severing of diplomatic ties between the United States and Cuba in 1961. Removing its official presence from the island, the U.S. Government effectively handed the keys to the Swiss Embassy for safeguarding, allowing the building to maintain its sovereign status and the diplomatic immunity of its occupants. Since the partial detente negotiated by President Carter in 1977, the building has housed the abstrusely titled “U.S. Special Interests Section,” a unofficial diplomatic outpost still operating formally under the auspices of the Swiss government.

The building’s function as an ideological instrument has never subsided. In addition to its enduring symbolic role as a beacon of U.S. imperialism, rampant speculation that the building has served as a base for CIA operations on the island has legitimized the enmity of the Cuban public. During the second Bush administration, the U.S. government increased tensions further by deliberately flashing human rights messages across the façade of the building. In response, the Cuban government erected 138 flags on the “Anti-Imperialist Plaza” in front of the building to block the messages out. [7] This architectural “pissing contest” continued until 2009, when President Obama took office amid promises to overhaul embittered U.S. relations with Cuba. [8]

With a thaw in tensions now imminent, the building is poised to renew its original purpose as a symbol of collaboration, testing the resiliency of architecture’s function as an evocative, semiologically charged object of society’s collective memory. As the likely home of the future U.S. Embassy, can the building again come to represent the optimistic vision of a better future, as was once promised by L’Esprit Nouveau? Or will the physical object be forever sullied by its associations with a darker political past? Perhaps this is the enduring capacity of architecture to take on new meaning, against which architects may be but powerless Geppettos, makers of objects destined to take on lives of their own. 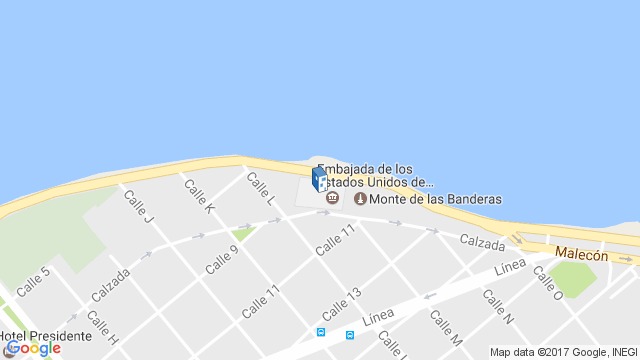