Curated by Apostolis Artinos, the exhibit "The Minimum Structure" features a design for an urban hut by deltarchi | dragonas christopoulou architects. Citing the mid-19th century desire to escape the city, manifest in examples such as Martin Heidegger's hütte, Le Corbusier's cabanon and Michelangelo Antonioni’s “L’avventura,” the firm has designed a structure to provide a spare space for meditation and peace among Athenian rooftops. 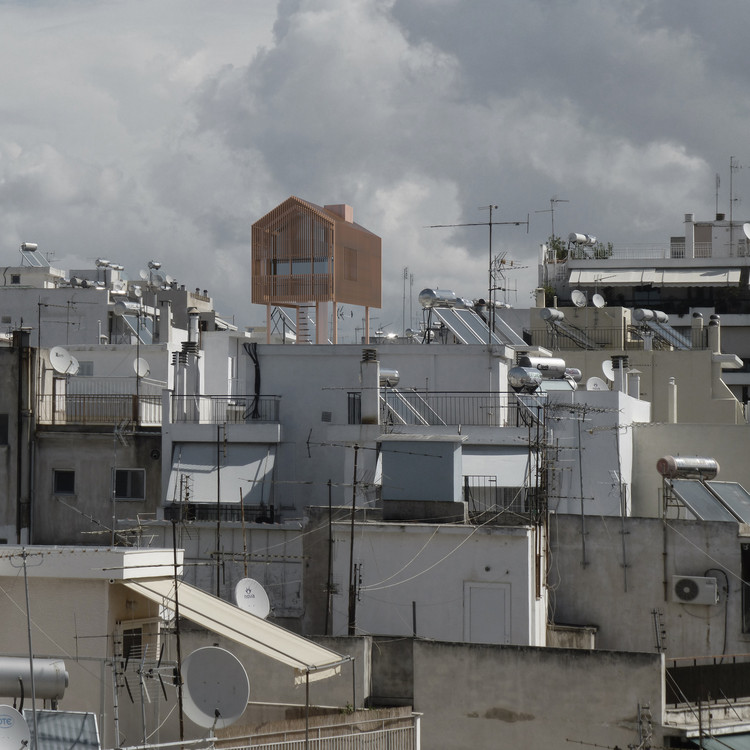 Alongside the development of the 20th century urban metropolis, the phenomenon of remote residential cabins grew as a heterotopia in contrast to the rapid buzz of city life. With the advent of the 21st century, however, and the expansion of digital networks and structures across every corner of the planet, isolated space is much harder to come by.

The new hut, therefore, "is not created on the natural ground, but on the urbanscape of the Athenian terraces, only two meters over the rooftop of a typical 'polykatoikia'." Overturning traditional ideas of seeking isolation in the countryside, the firm designs a hut within the urban fabric in order to provide an unexpected perspective from which the city-dweller can meditate and perceive the city.

Within a mere nine square meters, and "offering views of an artificial landscape, consisting of antennas, solar panels and insulation materials," the hut carves out a space for temporary isolation and contemplation within the crowded industriousness of the Greek city. With a return to a primal and elemental method of living, the hut reconfigures the skyline of Athens with a new heterotopia.