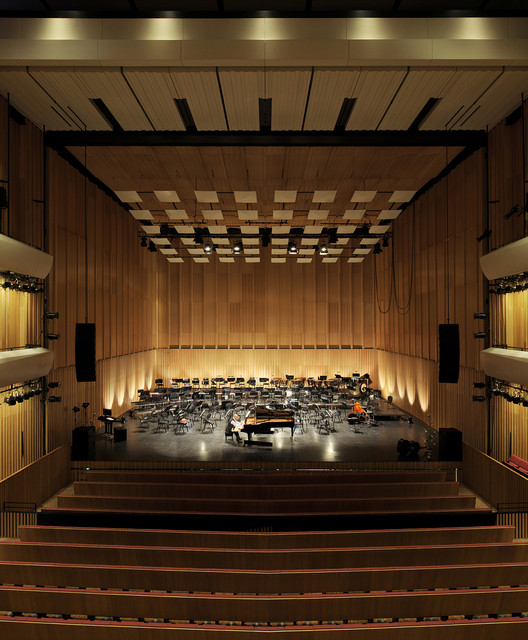 Text description provided by the architects. Stormen is a landmark project to create a new cultural quarter for the city of Bodø, Norway comprised of two buildings by DRDH architects, a 6,300m² Library and a 11,200m² three-auditorium Concert Hall. In 2009, DRDH was awarded the design of the project through an invited international competition. The invitation to compete followed a previous open competition win for the masterplan of the city’s Cultural Quarter in 2008. Both buildings respond to the particularities of their context, situated between city and landscape, whilst maintaining a familial relationship that creates an urban ensemble. Externally, both façades display a trabeated construction of pre-cast concrete, with an aggregate of local white stone. Forms rhyme between them. Roofs and towers speak to one another and the library establishes a horizon, across which the Concert Hall surveys the dramatic landscape of sea and mountains.

Internally however the buildings offer quite different characters. The Concert Hall has three auditoriums compactly placed from east to west across the site. In the centre is the 944 seat Main Hall and the fly tower; with two smaller performance spaces situated below it, at lower ground level. The Main Hall offers a new typology that embodies the visual and acoustic qualities necessary for a concert hall, alongside the technical and performance characteristics of a theatre. Supporting functions wrap around and over these performance spaces. A sequence of generously proportioned public rooms connect the auditoria around the two sides of the building that face onto the principal streets, while back-of-house facilities wrap around the opposing sides.

The principal spaces of the Library describe an open internal landscape, which focuses upon the main reading space with its glazed elevation to the harbour. The building includes a number of other community functions including a flexible performance space, a gallery, a multifunction room and a café. These are defined as a series of rooms that face the city streets. The building is open to both the city and the harbour, with entrances connected by an internal street. The children’s library, at the top of the building, is more intimate, nestled beneath an inverted roof form and focused around an external play court.

DRDH Architects have been responsible for the complete architectural design of the two buildings, including Acoustic and Theatre design with Arup London and cost quantification and analysis. Throughout the detailed design stages, the project has been coordinated through extensive use of Building Information Modelling (BIM). Procured through a form of Construction Management, the contracts have been tendered on full production information produced in London. DRDH have also delivered the FF&E across both buildings and have developed the way finding and signage strategy with Oslo based designers Neue. 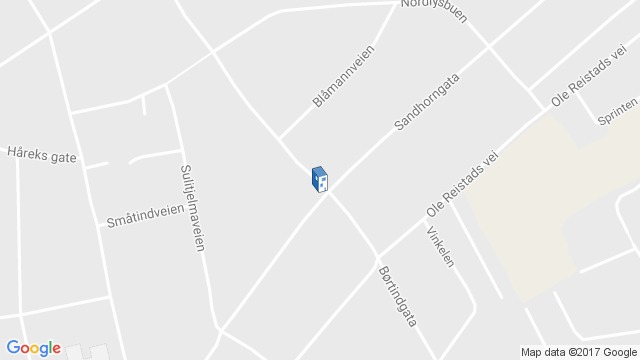 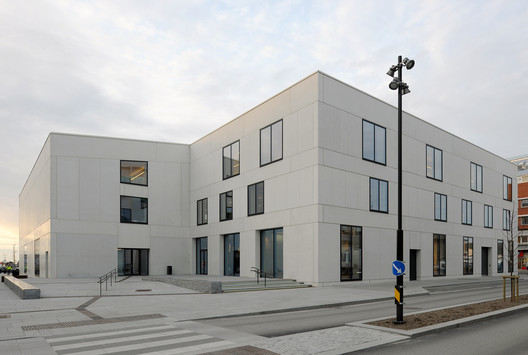