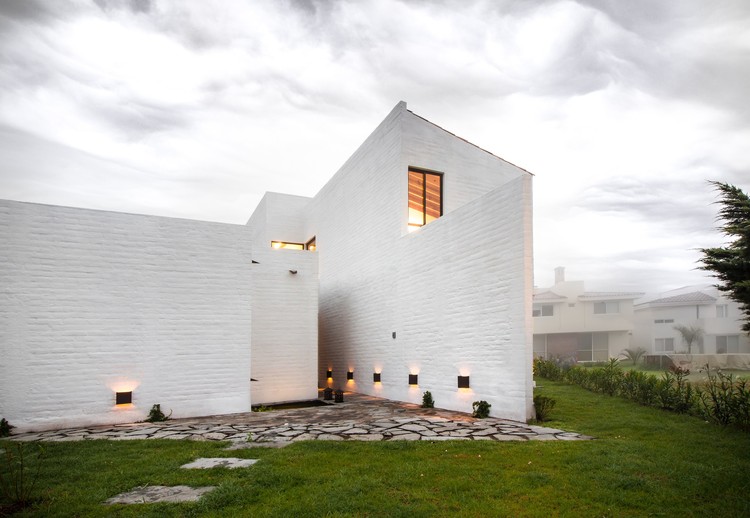 Text description provided by the architects. The project is comprised of two stages, the first of 195m2, the second of 25m2 for a total of 220m2 on a plot of 390m2, which is located within a subdivision located in to the south of the metropolitan area of the city of Guadalajara.

The site for this project has certain restrictions, both frontal and lateral, which along with the solar orientation mark an important guideline for the project. The proposal amends the unused linear garden area that usually appears on the sides of this type of housing.

The idea arises from the rotation of the axes. The walls are tilted to protect the house from the setting sun, thus breaking the orthogonality produced by the rigidity of the urban grid. By rotating the axes, a series of courtyards and views are produced, so that the outside is perceived from any interior space.

The front facade is completely opaque due to its orientation. Its volume hides the main access and generates an entry plaza that invites the user to enter the house. This gesture causes the user to take a tour of discovery. The main entrance is located at the juncture of the day area, service area, and vertical circulation, this creates a practicality for everyday use, enabling the user to always enter through the main door. On the rear facade, the rotation of the axes creates an opening that generates the integration of the garden into the project.

The bricks produce a game of chiaroscuro due to the roughness and heterogeneity of the walls, which will be strengthened with the patina of time from the rain, dust, and vegetation.