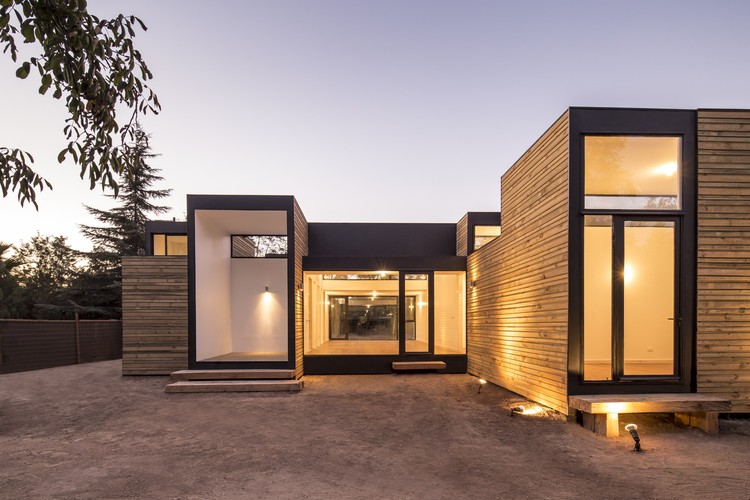 The project was to build a 155 m2 house in a very limited time frame, and with a reduced budget. In response we decided to use an efficient construction system and a simplified palette of finishes.

We designed a structure completely based on SIP panels (structural insulated panels), supported on a grid of foundations that intervene minimally in the existing terrain.

We defined different three-dimensional modules, made up of floor, walls and roof panels. The modules were designed in two widths and two heights, which in their combination and association constitute the rooms of the house.

The dimensions used to configure the modules correspond to the manufacturing dimensions of the panels, maximizing the material and reducing losses during construction.

The intention was to minimize circulation surfaces, placing the common area at the center of the project, and the other rooms around it. This allowed us to concentrate the load bearing walls in the side aisles of the house, leaving the central common area without any structure.

The program is developed in 4 parallel aisles formed by a sum of modules. Two aisles are composed of modules 244 cms wide, corresponding to the service program, and two aisles are made up of modules of 488 cms wide, corresponding to common rooms. We merged or alternated high and low modules in all aisles, achieving greater heights and therefore higher volumes of air in all the rooms of the house without necessarily increasing the surface (cubic meters vs square meters). The resulting roof, with alternating heights, generates light entries oriented to the north in most rooms. This basic principle is why we have called the house "SIP m3". SIP due to its panel based structure and m3 due to the cubic volume.