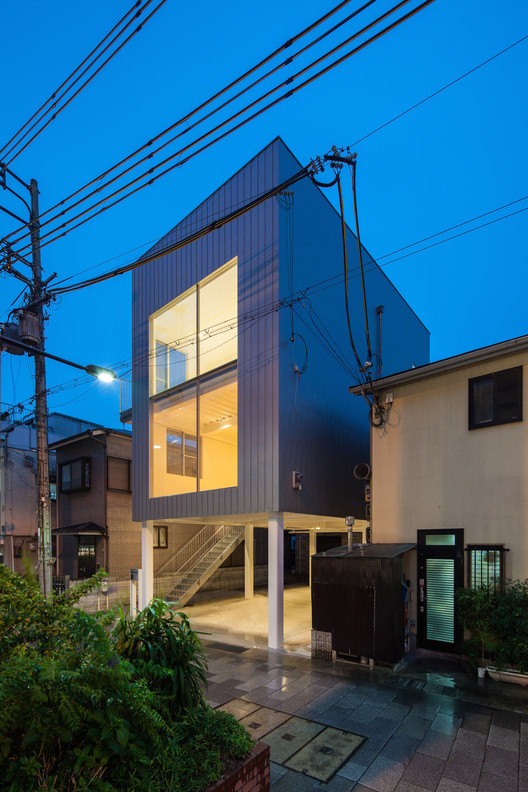 Text description provided by the architects. This warehouse like residence in Ashiya city, Japan is designed by the design studio from Osaka, TOFU Architects. The site is located close to a national highway overpass connecting the cities of Kobe and Osaka. Due to large vehicles moving across the highway and a constant traffic volume throughout the day noise and vibration were two problems that the designers had to face when planning for the project. The architects decided to go for a steel frame construction where the living space rests on pilotis hence detaching it from the road below.

Also by increasing the size of the structural steel members more than the usual norm and a deep foundation the architects were able to realise a strong structure inside which one hardly feels the vibrations caused by vehicles moving on the road. Usually a house that is situated along or close to a highway with a high traffic volume isn’t desirable but by raising the living space on pilotis and controlling the vibrations caused by the movement of vehicles has given the clients a home with a view from the living area that is never boring as it constantly changing each second thanks to the close proximity of the national highway. Also the view of the Rokko mountain from the large window that spans two floors in the front façade is beautiful.

As far as the plan of the house is concerned it is simple and clear. The 2nd and 3rd floor box like living volume is raised on top of pilotis and this gives it a warehouse like appearance. Inside the architects have tried to reduce walls separating space as far as possible.  Since the entire living volume is raised on pilotis the first floor is used as a carport with a small vegetable garden as well. The café like 2nd floor is the primary living area from where one can enjoy the view outside. The 3rd floor houses the bedroom and the children’s room that is tied with a balcony connecting both rooms. The large window in the front that also spans across two floors results in the space feeling far more expansive that it actually is. The rooftop,  a place to watch fireworks in the summer and play with the kids is a nice space for relaxing.