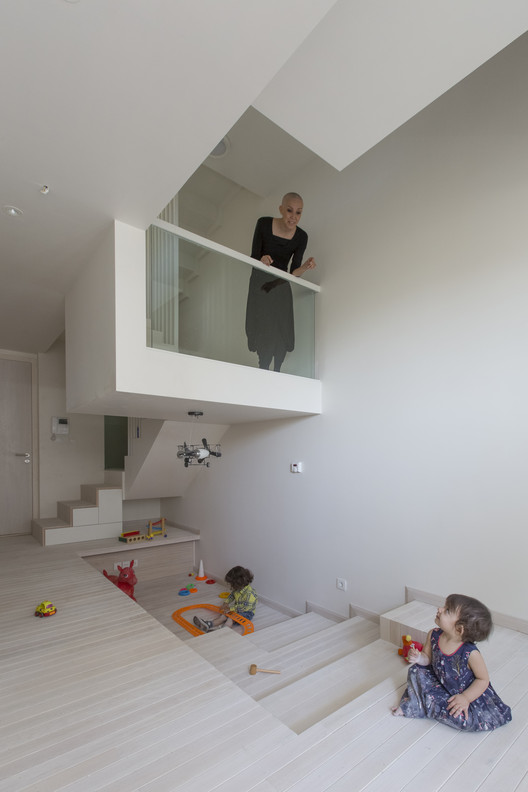 Text description provided by the architects. Tribe House is our try in re-evaluating the lost values of Iranian domestic space. During the twentieth century, Iranians were rapidly modernized without actually understanding or going through the essential steps of modernity. Certain paradigms of domestic life was lost in this transition. In the capital, the city of Tehran, the city was rebuilt substantially in the span of a century. The two-story homes were substituted with four to five-story apartment buildings and urban life style was modified accordingly.

Certain traditions in conception and erection of domestic space was lost in this process, including the connection of the house with the garden, and the intrinsic complexity of interior spaces that was the product of well-crafted sectional and planar connections.

Tribe House examines the possibility of designing for real homes within the framework of erecting an infill apartment.

Tribe House is a four-story building that houses three residential units for members of one big family. The lot of the project meets an inner lot in the north that its street access is limited to a 1 meter wide alley along the western border of our project. In the east, the neighboring lot has a depth that is equal to the sum of the depth of our project’s lot and the northern neighbor. This means that the mass of the building in the eastern lot will never cover the eastern facade of our project. This is due to the zoning bylaw in Tehran that exacts a maximum buildable envelope of 60% of the depth of the lot plus 2 meters. Hence, our project ends up having 4 facades, whereas according to the zoning bylaws it is considered an infill! In designing the Tribe House, we have tried to explore the potentials of such unique typology: an infill with four facades:

In the southern façade, the volumetric composition of a series of spatial pockets that are the result of localized extrusions and intrusions of the structural roof plates has created a series of connected balconies. Most of the interior spaces that are located at the southern part of the building look into these balconies laterally as opposed to opening up to the street. Theses connected balconies are envisioned as little green pockets. In parts of the southern façade, a semi-transparent and porous brick wall functions as a second skin. The brick shades are partially operable, allowing for transformation of the façade composition, in terms of access to view and natural light,  based on desires of the occupants.

The northern façade is punched with a series of openings with installed flower boxes that creates a vegetated view for the inner lot in the north. This punched green wall is the only view that the residence of the inner lot have from the outside world. The punched northern façade also allows for ample natural light for the staircase of the building.

In the western façade and along the narrow access alley of the neighboring inner lot, a series of small holes offer the possibility of indirect access of the interior spaces to natural light for places that are located in deeper part of our project. Along the series of punched holes, an elongated gap allows for direct access of the staircase and the southern interior units to natural light. These openings are taking shape in constant negotiation with the limiting zoning bylaws.

In the design of the southeastern corner of the project, a series of extrusions and protrusions, allow for lateral access of the interior to the somewhat prime view in the east, which is the view of one of the urban parks. Since the building is considered an infill and is not allowed to have openings in the east, the volumetric composition of the southeastern corner allows to get partial access to this view laterally.

In section, the project is a composition of continuous folded structural slabs as well as disconnected hanging surfaces. The sectional composition of the project allows of in-between spatial pockets and vertical surfaces to become partially inhabitable. In maximizing the inhabitable surfaces of the project and including the vertical architectural surfaces in the programing of the daily-life of the inhabitants, the western interior surface is designed as a composition of shelves that is produced based on exact dimensions of the day-to-day objects of the domestic life in its contemporary version. Some of the shelves are to house ordinary domestic appliances such as the TV set and the Stereo, while the others are to be used as work stations and even children’s bed. 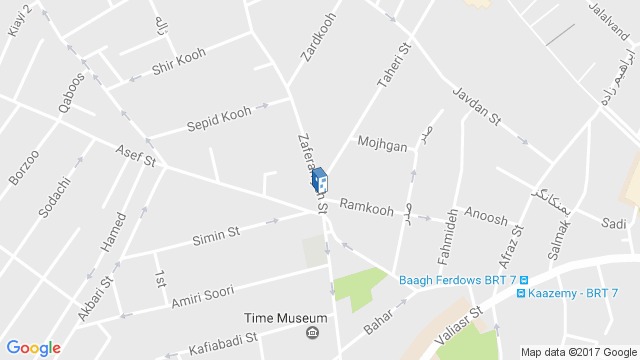