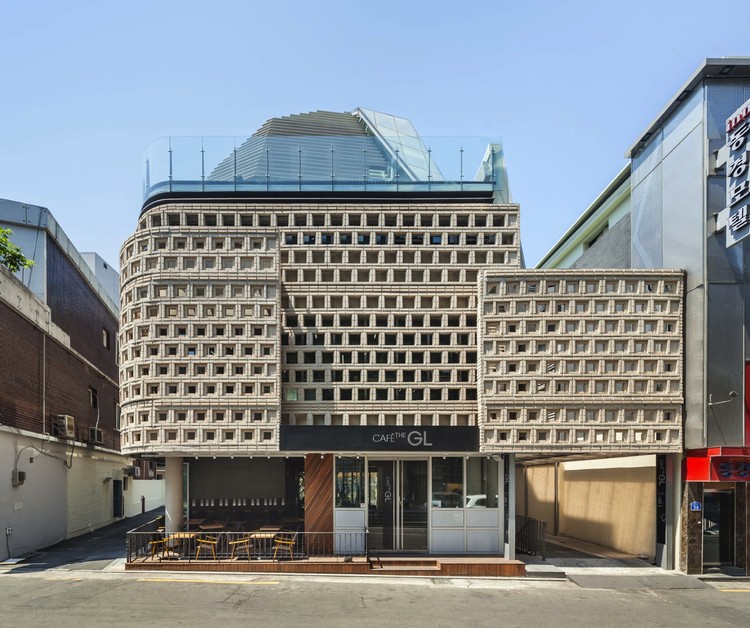 Text description provided by the architects. GL Com’s main area of business is performance and events planning. GL Com wished to relocate their headquarters from Guro-dong to the Hongdae Campus Street in Seogyo-dong in order to reinforce the core competencies of the company and to facilitate seamless communication between the diverse components related to events planning. The client wished for the new GL Com headquarters, designed for approximately 30 staff members, to have a unique and dynamic appearance, in keeping with the character of a performance and events agency.

The site is located a block from the Hongdae Campus street. Measuring a little less than 100 pyong(323.3㎡), the site is severely limited by the constraints of the road and the awkward lighting restrictions. Rather than being viewed as obstacles, the height limits of 6m on the main road and 3m on the dead-end road as well as legal requirements for sunlight in the neighboring sites were instead used to draw out usable area and the outlining of the form in the early design stages.

The upper half of the GL Com Headquarters takes on an irregular form, evoking images of the pyramids. This is due to the diagonal height limitations imposed by the irregular shape of the land. The core of the design process was to transfer the primary form derived from the site conditions and regulations into the creative and unique image desired by GL Comm. By placing multiple layers on the façade, a new order was put in place, and by finishing this with a three-layered Low-E glass of 31mm, the building was planned to naturally reveal the dynamic and sensitive modulations that match the dual changes of night and day on Hongdae Campus Street.

The basement and first floor were originally planned as a cultural space with easy access from the main road. A sunken courtyard was planned to simultaneously solve the problem of the lighting restrictions and provide subsidiary pathways to the basement. Offices that required more ample space were designated for the second and third floors while an entrance pathway was laid out from the dead-end road to facilitate easy access to the entrance from the car park located at the rear.

The middle floors were finished with solid and firm bricks to stabilize the irregular glass structure on the top floors. The brick façade was designed as a double skin, playing the role of a sunscreen. To make the façade more porous, the bricks were placed within the metallic frame in panels with differently sized openings in square ratios. The brick panels were completed in the factory by placing conventional bricks into aluminium frames. The pre-made brick panels were installed on site, switching to a method of hanging the bricks rather than the standard bricklaying (stacking) method. Through a reinterpretation of the construction method, a sense of porousness was freely expressed. This would have been somewhat difficult using conventional methods of bricklaying. By reversing the banality of brick through the familiarity of the material, brick is exposed in a new light, metaphorically symbolizing the vision of GL Com through such deconstructive ways of thinking as exhibited in the design of the façade.

The interior of the GL Com Headquarters has been finished with exposed concrete, except for the granite used for the floor. All lighting was planned in advanced, and thus installed within the reclaimed concrete, and the sloping structural columns and crossbeams became unified within the interior space. The brick panel façade that can be seen from the windows brings a soft warmth into the somewhat cold interior, drawing in the wind and the light. The space continues right up to the wall with the brick paneling, creating a clean and pleasant internal environment.

The architectural design of the GL Com Headquarters is an apt manifestation of the image and vision of the firm, as a project that further reinforces the main competencies of the company and aims to create a platform to leap forward into the future. It is hoped that GL Com may flourish and blossom as a center for performances and events that can contribute to society from its new location amid the youth and culture of Hongdae Campus Street. 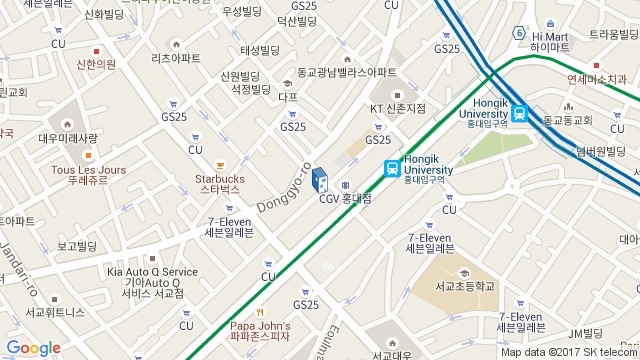 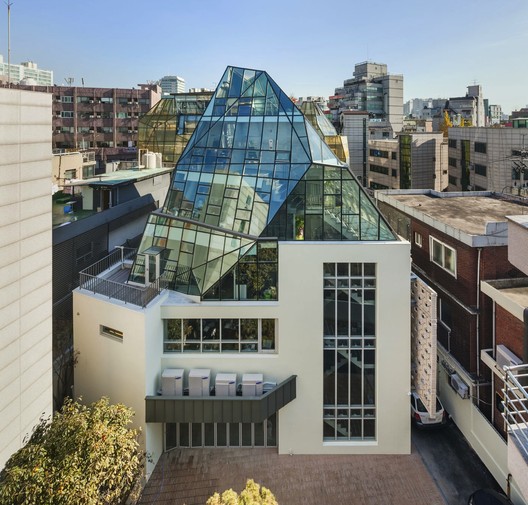