Save
Pilot Dwelling for the Groote Scheere / Bureau B+B 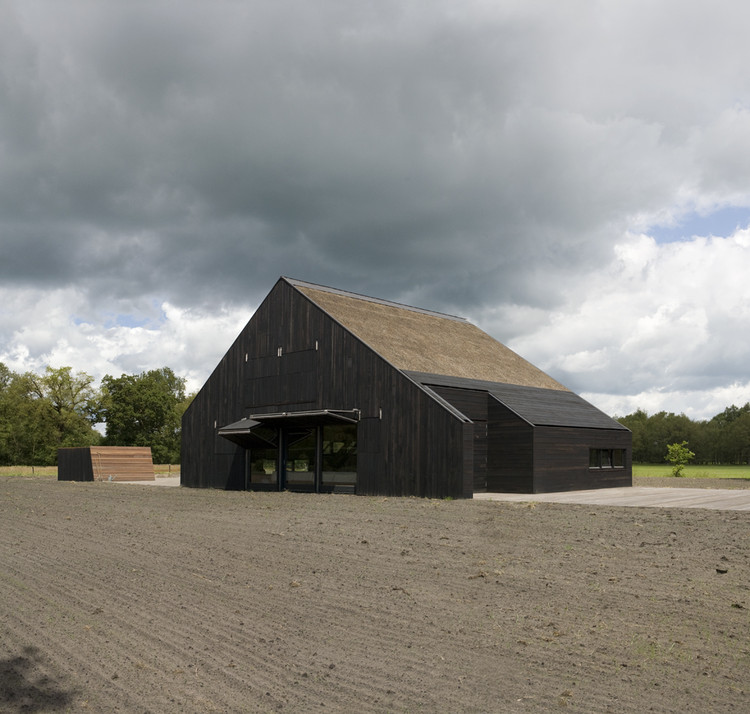 Text description provided by the architects. Given the current economic climate, owners of country estates in the Netherlands are looking for new ways to sustain themselves. Forests cost money and agriculture is under pressure, yet it is necessary for owners to find new economic support for their country estates. The 800ha ‘Groote Scheere’ country estate in the north east of the Netherlands is one such example.

Bureau B+B was commissioned by the former Fortis Vastgoed Landelijk (now known as ASR Vastgoed) to create a vision and structure quality plan for nine open-plan houses, plus one pilot house, varying from 375 m3 - 1000 m3, without a delineated/private garden on the country estate.

The “Groote Scheere” country estate is located at the border of Drenthe and the Overijssel in the Netherlands. In this location, there has always been a coherence between the buildings and nature and it is known for its farm land, village atmosphere and diverse landscape characteristics. Unlike other housing estates across the world where development can tend to be ‘cookie-cutter’, the Grote Scheere is unique in that each house is individual and responds specifically to the site conditions. And although each house is unique, they have similar characteristics which form a coherent ‘family’, thereby strengthening the recognition of the site. The Grote Scheere distinguishes itself from other country estates by its simple and modest buildings and was designed through linking the locations of the dwellings, to transitions in the landscape. The first dwelling, the pilot named ‘The Entrance House’’ was completed in June 2009.

The vision for “9+1” is derived from the character of the existing and decayed buildings, most of which are farmhouses. The diversity of this man-made landscape is also unique; forests, fields, ponds and streams. The design, to connect the style of construction to the landscape has only strengthened the concept; to discover and navigate the landscape by following the dwellings.

The location for the dwellings have been chosen with the most unique sites in mind. The themes of the estate reed villa, field villa, flood villa, forest, creek, lane, pond, border and entrance villa form a strong coherence which reflects the diversity on the landscape. For example, the ‘Creek Villa’ which stands in between two forests with a creek running through the middle, splitting the house in two. The roof then becomes a terrace, and acts as a bridge across the creek. The proposed housing typology suggests different ways of inhabitation, such as a house where children take care of their parents.

The characteristics of the old farms and barns have been translated into new residential typologies . The ‘Halle’ farmhouse was the starting point for the shape of the characteristic building where the ratio is dominated by the roof, with the proportions of three to one, which is the facade. This accentuates the difference in the landscape through their location and positioning. A hay barn rising up from the grain and grass is simultaneously a dwelling submerged in the landscape. This landscape functions as an enormous garden that due to its location and natural morphology has both private and public accessibility.

The dwellings in the landscape form a continuous surface where the roof and ground become one and the same, acting as a band in the landscape, blurring the boundaries between public and private in the housing estate. The infrastructure reinforces this idea. Where the pedestrian and bicycle paths, and small roads are designed in such a way that they lead visitors and are therefore given relative access to certain areas.

The ‘Entrance House’ which is the pilot, is situated at the end of the adjacent village, Anerveen. This location was chosen specifically; the dwelling, together with the ‘De Eindhoeve’, the farm opposite, forms the gateway to the estate.

The black wooden house has strict contours and is reminiscent of a simple barn, connecting it to the farmhouse on the opposite side of the road. The roof opens up to the landscape to become a private outdoor space. The wooden terrace lies just above the landscape due to the minute height difference, making a demarcation of the private space superfluous. The house is not surrounded by the landscape but is embedded in it.

The façade is made up of a series of shutters play an essential role in the appearance of the dwelling. Where the large vertical shutters on the side allow light to enter when they are open in the summer they also function as sun blinds. The horizontal shutters on the opposite side are smaller and more narrow, reminiscent of slits in the façade of a farm house. Instead of overlapping shingles, the panels are slightly ajar for the particular moment where light can protrude through the shutters.

The roofs are in contrast with the original farms where thatching hangs over the outside walls. The thatched roof of the ‘Entrance house’ has been set deep into its wooden building volume, creating a band where the roof and the ground literally fold into one another , removing the demarcation between architecture and landscape, and between public and private, and considers it as one whole.

In the original farm, the dwelling and the hayloft are two essential spaces. These historic components will have new significance in the ‘Entrance house’ . The flexible shell of the dwelling makes walls unnecessary and creates one large interior space. The hayloft hangs above the middle of the open space like a floor and has a intimate, cozy atmosphere. When the shutters on this hayloft are opened, there is an opportunity to view the Overijssel’s exquisite landscape.