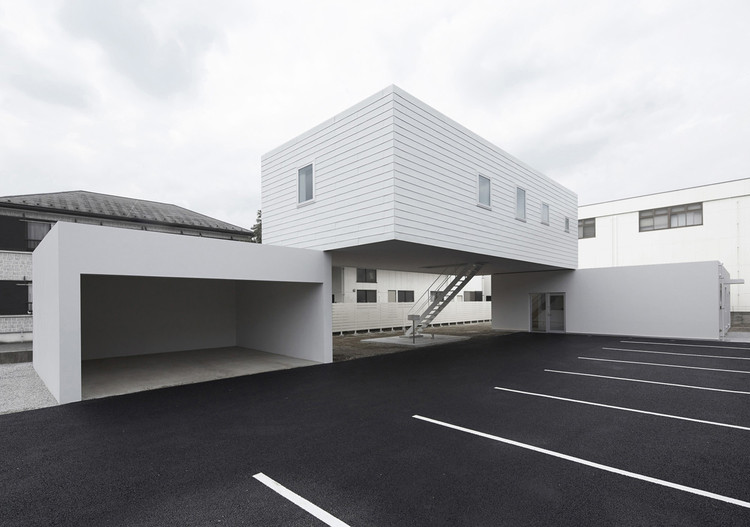 Text description provided by the architects. The buildings look like a set of building blocks piled up to the brink of collapsing, but they do not fall down even though it seems like they could at any moment.

They consist of a dental clinic and a house, which were built in a residential area in a suburb of Hachioji—a city located in the western part of Tokyo. The building site was previously a field, and we planned to construct a dental clinic, a house, a garage for two cars, and a parking lot for seven patients’ cars at the site, which was spacious enough to accommodate all these structures and provide a comfortable working and living environment.

Locating the garage and the parking lot close to the road that runs in front of the clinic makes them easiest to use if the need to put a car into and pull it out of the garage or the parking lot is taken into consideration. In this case, however, the buildings would have to be arranged at the back of the site, an arrangement that would diminish the dental clinic’s presence in the neighborhood. If the buildings were arranged at the front, on the other hand, there would be problems with the flow plan to park nine cars in the garage and the parking lot.

We divided the rectangular space of the dental clinic into several strips of space and allocated features such as waiting lounges, consultation rooms, hallways, and other miscellaneous facilities to them. And we arranged a living and dining room with a kitchen, a bathroom, and a lavatory on the northern side of the narrow, flat house with a staircase located at its center and a bedroom and other rooms on the southern side.

Basically, indirect lighting is used for both the inside and outside of the buildings. Upward-facing linear LED lighting apparatuses have been installed on the external wall of the dental clinic. In addition, linear cornice lighting apparatuses have been employed for the waiting lounges and the living room of the house. Thus the surface of both inside and outside walls are illuminated by soft, linear rays of light.

These recently constructed buildings are two stories but are farthest from the standard concept of two-story buildings. The reason for this is that the second floor barely stays on the first floor. This structure may be a wasteful one if viewed from the perspective of economic efficiency, a requirement that has essentially to be met when designing a building.

However, these buildings, which look like a set of building blocks piled up to the brink of collapsing and are full of tension, retain an atmosphere of traditional Japanese architecture, which is typically made up of beams and pillars, though they are modern structures, and at the same time, they have an overwhelming presence not found in other structures. The piloti (piling) without pillars beneath the house is used not only to allow people and cars to pass through it but also for a waiting lounge or a living room with tables and chairs arranged in it for when the weather is nice.

Through this project, we were able to create a set of buildings with an overwhelming presence and comfortable spaces, whose value cannot be measured based on economic efficiency alone.