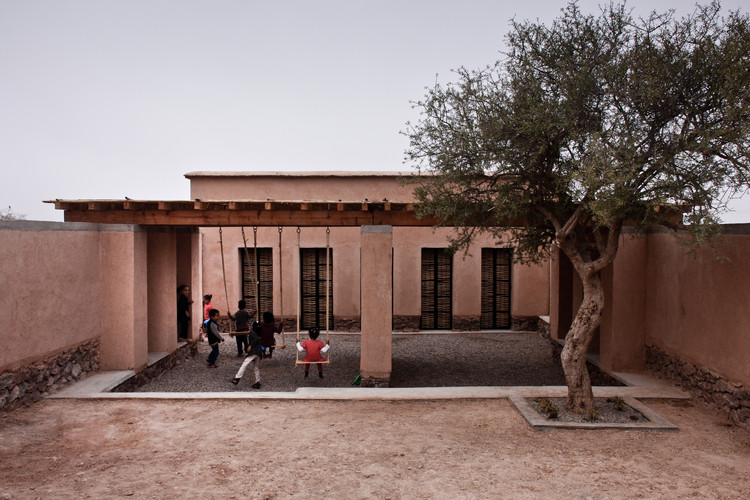 Text description provided by the architects. The preschool of Aknaibich is only 1 classroom, nevertheless a holistic architectural design, incorporating community dynamics, bioclimatics and a new vernacular style.

Aknaibich is a town in transition: the eastern old town is made of earthen constructions, sinusoid roads and narrow alleys, while the western part exists of modern, plot-based concrete houses built by rural-urban emigrants. In need of educational infrastructure, Goodplanet foundation presided by French photograher Yann-Arthus Bertrand aims to install a preschool with bioclimatic functioning, as an extension to the existing concrete school building in the modern part of town.

After a workshop with the Aknaibich community, it was seen fit to be inspired by the old town, and hence to create a dialogue with the existing modern school infrastructure. It's style could be called a new vernacular, inspired on local typologies, materials and techniques, while at the same time having a contemporary look, performant bio-climatic functioning and earthquake proof design.

The preschool of Aknaibich has traditionally inclined foundations of locally sourced nature stone, with adobe walls, a wood-and-earth flat roof and rammed earth enclosure walls. The exterior finishing is done with a "tamelass" render, a mix of 2 earths, straw and sand, while the interior finishing is made of polished "nouss-nouss", a "half-half" of earth and gypsum to create a breathable interior plaster which diffuses indirect sunlight.

The east and west façades which have harsh low-sun impacts are doubled-up with a cavity wall for insulation, while the south façade has deep, small windows and a big thermal mass, making the building cool during the day, but warmer through the night until the morning. The north façade has been maximally opened up with glass doors to allow indirect sunlight to enter the room.

As a site implementation, the preschool borders the school plot, hence defining the site without the explicit use of compound walls. It is neatly located in between three existing argan trees, which are important to preserve in the quite deforestated new part of town. By following the grid-like layout of the existing school rooms, the Preschool of Aknaibich creates an interesting juxtaposition of the 'new vernacular' next to the 'existing modern', maybe inspiring the way forward for future constructions within the community of Aknaibich. 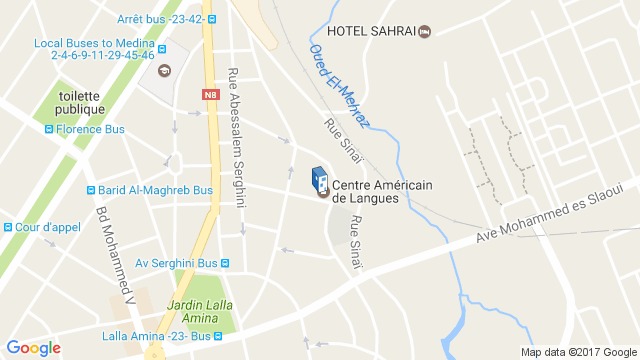 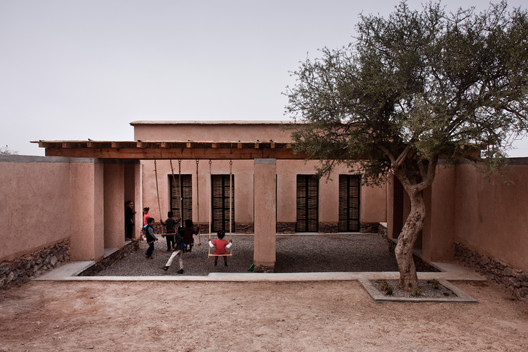