Save
White Hut and Tilia Japonica / Takahashi Maki and Associates 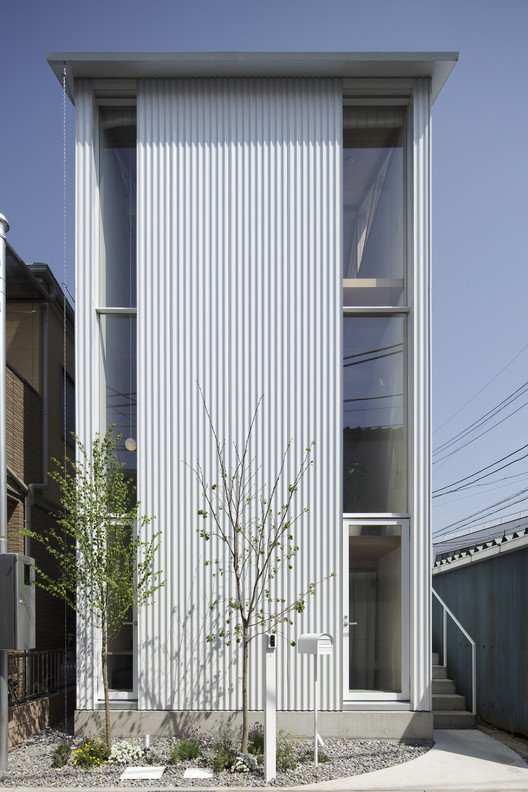 Text description provided by the architects. The building was rebuilt in a residential area developed in the 1960s that was used as rice fields, and prior to that a likely Arakawa distributary. The building was located towards the west side of the site to allow a line-of-vision between the road on the south side and the park on the north side, and where the view was formerly blocked is now used as an approach.

The main structures of the building are two large wooden walls on the north and south sides that block the view, three floors in-between, and a roof truss. In order to create a foundation for living, the interior of the large wooden walls are entirely made of shelves of Tilia japonica. White walls supported with steel frames sandwich both ends of the wall shelves. In the openings between the wall shelves and the white walls, there are slit windows and a vaulted ceiling that runs from the park to the street. Three trees are planted in front of the windows to provide shade in a town with few trees.

A bed is on the quiet first floor, a table is on the main floor where it is evenly spaced with its surroundings, and a bathtub is located on the sunlit topmost floor. A kitchen, a desk, and a bathroom are under the vaulted ceiling and paired up with the aforementioned furniture on each floor. The vaulted ceiling and the furniture-like stairs join the interior, and the exterior is joined by the windows.

Gravel that looks like a riverbed covers the ground, and the foundation stone was raised to take into account the water level of previous floods. The three trees are Cercidiphyllum japonicum that naturally occur on waterfronts, and Tilia japonica that is also used for the wall shelf material. The symmetric white facade is hidden behind the neighboring blue garage and gives an illusion that the house existed before the surrounding houses were built. The roof truss seen behind the glass provides a barn-like appearance, and is intended to create an incongruent situation in a uniform residential area.

The house was designed to realize a wealth of life in a large space that is integrated with the history of the site and the surrounding environment, although it is actually a small sized house.