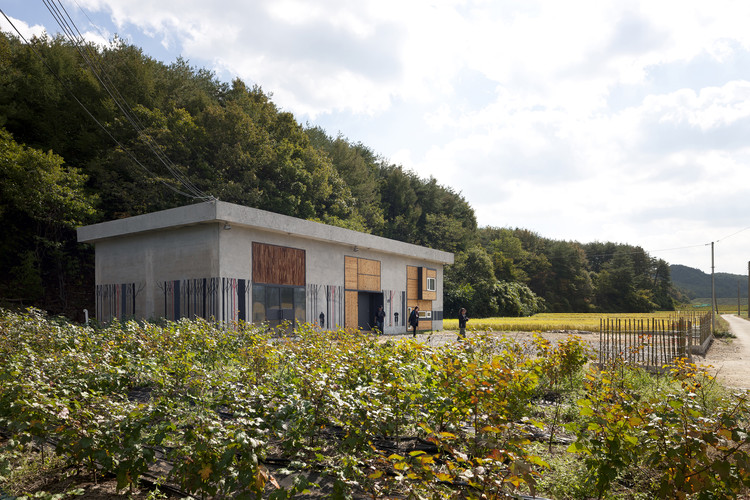 Text description provided by the architects. This project is a 'House within a house', which is built in a 20-year-old warehouse. A year ago in October, a young couple in their late 20s, visited our studio to build their house to live after their wedding. They were the youngest clients who required our design.

The couple was about to get married next year (2014), and they were thinking of renovating the concrete warehouse in the bride's hometown as their new house. They said they want to fix it and take it as the starting point of their new life.

Her hometown was a small town next to East Sea, between Pohang and Gampo, which is 380km far from Seoul. Listening to their story, we could foresee the difficulties of the project and trying to come up with excuses to refuse politely. But when we saw the photographs of the old concrete warehouse standing inside the rice paddy and field, like a magic, it was like hearing the sound of a Pied Piper.  We already answered that we'll take the project.

The warehouse was built 20 years ago by the bride's father. He bought some property to start a new business in his hometown, and the very warehouse was an animal feed factory for a chicken farm. To let some big machineries in, the height became 5 meters high with a reinforced concrete structure, and exterior was finished with mortar on cement blocks.

Her father had been planning to build a two story house beside the warehouse when the business became stable. By bad fortune, after a year, her father passed away on a rainy day in a car accident. The business halted too soon and the building became farming tools storage for neighbors. Meanwhile, the warehouse became old with small and big holes in the wall. If it rained, water stayed on the rooftop and ran down inside.

Most of the young people in Korea start their newly-married life in an apartment, whether it is small or big. Considering economic value, or for convenience sake, it was a very special plan to make an inherited old warehouse to their new marriage home. Many people said that they were burning their money into the air if they invested on the old warehouse, instead of buying or renting an apartment. But the couple said to the people who were dissuading them that they don't need to worry because they are going to live in the house for their entire life.

Listening to their both wise and reckless thought, we felt burdened. The project to blow warmth into a warehouse with large blank was a task; it was like putting solid color into a black-and-white photograph and make it high-definition natural color picture, to make a strong cover for the young couple as a background for life.

The budget was prepared to cover about one third of the whole area. We started from the concept of inserting a house within a house, to provide enough area as they needed. There was enough height for two floors, so we put a kitchen, dining, living room and a small hidden library on the first floor, and put family room, bathroom, dress room, and bedroom on the second floor. They decided to fill the remaining space portion by portion as they live.

The admirable young couple got married on 4th of October, which is a year after we met them. By the courageous constructor's favor who decided to work despite the far distance from Seoul, the house was finished according to plan.

The house within the house was built in steel structure. Wall in the common space was finished with plywood and lightings were designed to accentuate the warmth of wood, and other spaces were finished by white paint to induce calm atmosphere. Floor was finished with white tile to make a gorgeous and bright space.

Since the budget was scarce, there was no spare to fix the rough concrete exterior wall. We promised to draw a mural ourselves. We got the design idea from the bar code. Each of the codes becomes a tree and the trees become a forest. So that the information read by the bar code represents the love of the family.

All members of our firm went in a car to the site to draw the mural for an overnight schedule. It was the first time for us to draw a mural, so it wasn't an easy task. But all staff enjoyed the pleasure of labor by drawing lines and rough sketches and coloring it. On the wall that reaches the rooftop, which has an outside stairs on it, we drew some drawings to represent the warmth of house and family. Drawing of Sugeun Park, who's the famous painter of Korea, became the model of our drawings.

The towering warehouse surrounded by rice paddy and field was finally reformed in 20 years into a storage to put people as well as the young couple's love and living inside.

It's just like Natalie Cole singing the song 'Unforgettable', which was sung by her father Nat King Cole, after several decades her father passed away. The daughter put the two story house inside the warehouse, not unlike a snail's shell made by her father. So the life and house continues again, and we decided to call this house 'Unforgettable'.