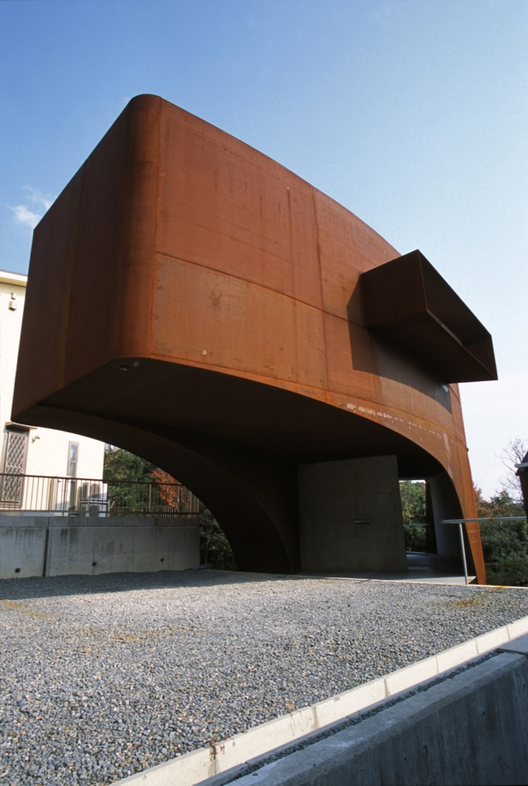 Text description provided by the architects. A residence built on a two-tiered site with a level difference of 3 meters. Because of the concern remained about the credibility of embankment and retaining wall built along the housing development, the foundation was laid on natural ground beneath the lower tier which was more reliable as the supporting stratum. The steel-made volume for public rooms floats over the retaining wall and above the upper tier for better view. Private rooms are arranged along the lower tier where the atmosphere is calm, at a distance from the front road, within a reinforced concrete structure which functions as a counterbalance to the overhanging volume.

An optimal use of curved surfaces designed in response to the site’s L-shaped plan was adopted in order to effectively support the large cantilevered volume. That is, instead of choosing a hierarchic structure of framework resistance system, a series of seamless structures of in-plane stress resistance system using steel sheets 12 mm thick made into panels with reinforcing ribs was set up to constitute a vessel-like steel shell structure. Although the first floor on the upper tier accommodates the entrance hall and one spare room, it mainly consists of voids –a sequence of external spaces that continue from the pilotis through the porch to the roof deck. The result is in fact much reminiscent of a ferryboat, in terms of both structure and layout, in which passenger decks and floating section are separated up and down with the vehicle decks in between.

Cor-ten steel used for the structure of this house’s first floor and up is entirely untreated on the surface and bare, expected to be covered with stable rust in the future. Contrastingly, the interior surfaces –floor, wall, ceiling- are finished uniformly white with elaborate thermal insulation. Combined with their curved forms, it is intended that a neutral space with a feeling of loss of depth is created.