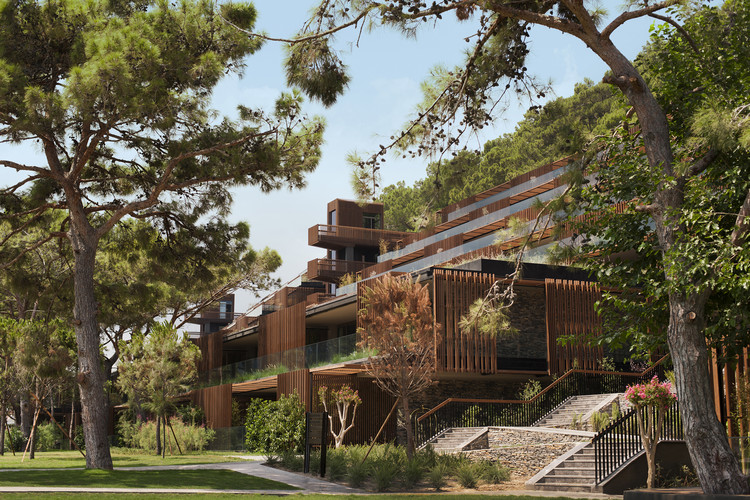 Text description provided by the architects. The project area is located in the town called Kiriş, in Kemer district of Antalya, Turkey. It has an area of 150.000 square meters and is almost like a boundary between the developed and natural areas, a doorstep into the nature.

Extending on a rather steep hillside, the project area is surrounded by a thick forest, two bays and a very long beach. It is positioned east to west and divided into natural sub-areas different in character by trees, unique flora, dropping hills, remains of the Kiriş World Hotel that was built in this area in 1987 as well as bays and small beaches.

The most prominent feature of the project area is the way it absorbs and conceals and holds back whatever it bears inside instead of revealing them.

The information above provides the main criteria establishing the conceptual framework of the project. In that regard, the contexts specific to each sub-area and the design criteria developed based on these concepts have been adopted as type guide. General decisions on settlement have been made accordingly.

Hillside (family suites): The concept of the project is built on certain “restrictions” such as the steep slope, thick pine tree forest, climate conditions and the traces of the previous settlement. Although such restrictions might initially seem like disadvantages, they actually opened the path for the unique character of the project. Therefore, instead of trying to resist and overcome these geographic and structural inputs, we have adopted an approach on the basis of these basic inputs.

The main focus in this zone was placed on “patching”. That is to say, the construction was terraced in parallel with the slopes. The inherent aspects of the zone, i.e. natural stone and wood, have been integrated in the construction to allow for a seamless mixing with the colors and tissues of the slope in time. The regular and irregular wooden elements surrounding the three dimensional envelope shaped structure provide climatic advantages on one hand and communication with the natural pattern on the other. Instead of an attractive and catchy landscape, the plan recommends a rural landscape carrying the same genes as the hill and keeping the surrounding trees and the remains of the former construction. Therefore, thanks to the thick flora covering the slopes and the terraces, the proposed construction will conceal itself, continue the relationship that is established with the existing topography and, “become one” with this topography instead of standing out.

This zone covers the reception and the entrance area and is the farthest point from the bay. It cannot be seen from the beach. It is quite flat and is the focal point of all sub-areas.

The mass of the main building encompasses units with high intensive functions such as restaurants, spa, stores and the lobby. The basic construction element identifying the character of the main building mass is the wood elements which serve both as sunbreakers and railing. These wooden elements surrounding the building like a thin layer of netting have been designed so as to define a new relationship with the dense flora.

The Laguna villas arranged as townhouses are positioned on this rather bare, wide and flat zone that bears the traces of the former construction and extends between the long beach and the vegetated area crawling into the beach.

Based on the scenario that the townhouse typology will be designed on a single direction and two directions, the distance between the buildings have been defined by using walls as structural elements. The spaces defined by these walls have been analyzed in detail according to their public, semi private and private usage.

The basic design motivation is built upon various aspects like the intensity and the arrangement of the wall elements, irregular extension of these walls into the pool, the way spaces between the buildings are hidden and not visible, and the way they leave the construction without any reference. Water is another element which penetrates, reflects and accentuates the building. The unity between water and the walls that define the spatial setup is the main element establishing this timeless feeling.

About the use of materials in The Villa Area

In order to ensure that the detailing of the walls as the most important element of this building group has the capacity to support the general approach, attention needed to be focused on the choice of materials. To ensure mixing with nature and to increase the strong structural effect, the walls need to have an intensive cross section. In that context, natural stones with a cross section of approximately 14 cm have been applied by stacking them with delicate masonry along the two façades of the fixed concrete framework of the walls. Thereby, the cross section of the walls attains an image that gives the impression of being an ordinary masonry wall, a natural part of its location and a connection with the landscape. Here, pieces of slate in different tones but similar in size have been used. Such an effective and intense use of natural stone materials has been the main factor behind reaching the desired feeling in the project area.

This is the area between the middle bay and the green strip extending to the beach. Various restaurants with high intensity of semi-open areas and the main outdoor pool have been positioned here.

The buildings in this area are single storey buildings with light structure and outstanding permeability. It is thanks to such structural features that these buildings can easily conceal themselves within the green strip. 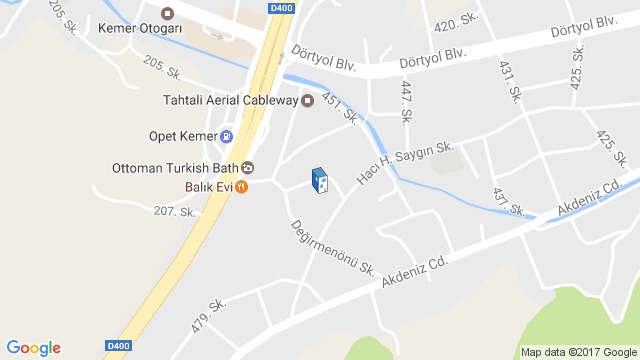