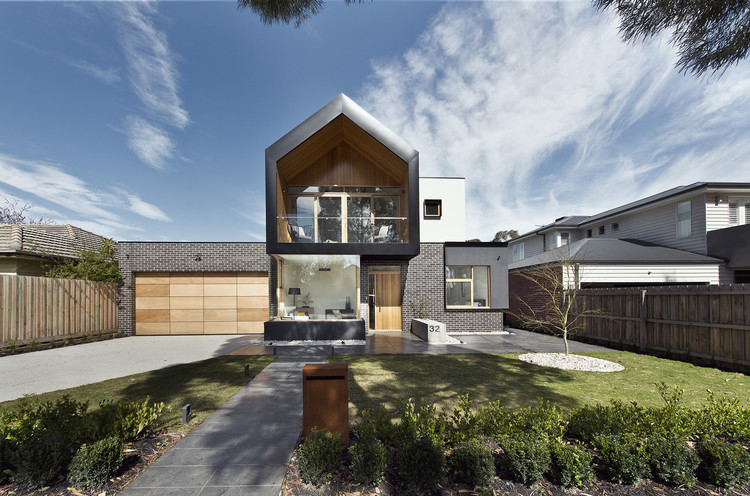 Text description provided by the architects. Located at the quiet eastern suburb of Melbourne, Australia. This site is a 705 m2 rectangular block of land with its short side and street frontage facing north.

Our brief from client was to design a large 5-bedroom dwelling for his extended family, which includes himself, his wife, his parents and planned newborns. Interested in architectural solutions, the client also had specific requests for large open spaces (both inside and outside), maximized access to northern sunlight, stylish fittings and fixtures as well as good value for money. It was an ambitious project with comparable tight budget.

The orientation of the site pre-determines that the dwelling’s backyard would be overshadowed by the dwelling itself. Therefore while not challenging the backyard’s role as the main outdoor space, our basic approach was to introduce a sizeable courtyard in the middle of the block, which would one, create a central outdoor activity space that feeds back into the interior for connection/view/light/ventilation, and two, add another north facing interface for the project.

North - Because of their importance, functional needs and sizes, the dwelling’s primary north facing street frontage façade has been allocated to entry lounge, garage, two master bedrooms and walk in robe. It would be beneficial for most of spaces to have sunlight access; and the fact that they have different functional uses also allowed us to articulate them differently, so to achieve a more vibrant street frontage presence. Privacy issue to bedrooms was simply dealt with using curtains, and the curtains were designed in a way that when they were open, they would have zero interference to the clarity of the front façade.

East - Behind the double garage was the central courtyard; this open space allows the dwelling to achieve a U shape footprint, with an average building depth of 8m, therefore eliminating any possible dark and poorly ventilated internal spaces.

South - To achieve the client’s large open space vision, a typical living + dining + kitchen arrangement was put to use. This generous 90 m2 space integrated the three uses, and interconnected all activities inside and outside. The living space in special was connected to both the central courtyard and the backyard, and creates a space that blurred the inside-outside boundary, and was also flourished with light.

West - All service related programmes such as bathrooms, laundry and prep kitchen, were placed at the western side of the block, utilising the service lane that runs north south and also acting a protective buffer against western sun.

In terms of the image of the project, it was our intention to be a good citizen in the neighbourhood and at the same time to achieve some level of attitude and character in its design. More importantly, the dwelling’s street facade needs to be the hero of the project.

After studying the neighbouring built forms of pitched and gabled roofs, a triangulated overall massing was chosen to link it to its context. The 19th century German architect Gottfried Semper described in his writing the idea of primitive hut as being the origin for vernacular architecture; and the fact that such simple triangular hut form is common in most cultures around the world, may explain why people with different cultural background are all likely to find such form appealing - it is stable, and provides a strong sense of shelter and homeliness; and people are also likely to associate it with the abstraction of the domestic cottages of their own specific cultures.

Each façade element had its own articulation, whether it is the cantilevering of the upper floor balcony, the transparency of the large glass pane beneath it, or the small walk-in robe window with extruded frame, the timber division lines of the master bed window, and the panelling of the timber garage door; all these elements were tied together under a unified colour scheme, and a loose geometric relationship which allowed one to read the underlying principles of such compositional structure, and yet not to be overwhelmed by its rigidity.

The external material selection quotes from the context. The earthiness of the brickwork, the stripping of the timber cladding, the shininess of the metal sheets, and the creamy white paint, all these properties were readily available in the surrounding; the unique quality of the project was achieved by combining and contrasting all these materials.

Facades that are less visible from the street, are much plainer and treated with less articulation, so that they would compete with the street façade, and also help meeting the client’s budget requirement.

The landscape design further enhances the dwelling’s street presence, the front garden passage way direct people to approach the building from front on, and in a ‘ceremonial’ way. 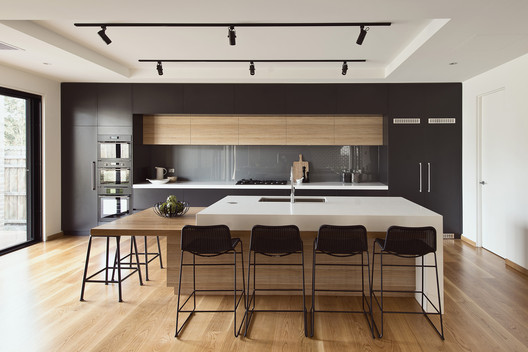