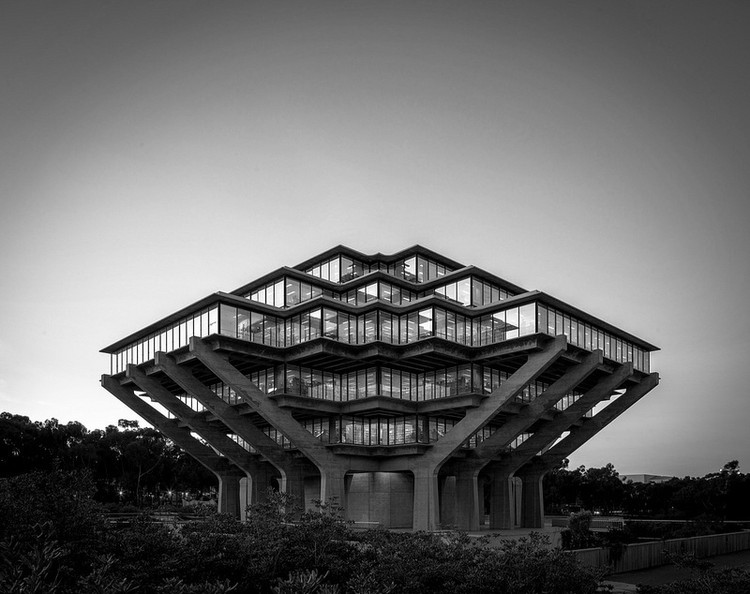 While he is often stylized as one of the more under-appreciated shapers of 20th century American architecture, Pereira enjoyed tremendous influence throughout the United States in the 1960s and 1970s. In 1965, he was awarded the commission to build the library at UCSD due in part to his impressive history of eye-catching and inventive designs. The building was to be located at geometric center of the San Diego campus at the crest of a small canyon, arguably the university’s most prominent piece of real estate. The design needed to be a visually robust statement worthy of the location, and Pereira seemed to be the right man for the job.

To develop the schematic design for the library, Pereira analyzed and categorized dozens of university libraries by their massing, circulation, and programmatic arrangements. He theorized about which forms were more effective than others at providing certain functions that he valued, such as daylight in the stacks, the ability to browse the shelves, and the potential for future expansion.

Using rudimentary diagrams as the basis of his design, he theorized that partially submerging the library would allow maximum potential for expansion and would bury the elements of the library that were not necessary above ground. For the aboveground portion, he wanted access to emanate from a singular point at the ground level, with a central core connecting the different floors. The most logical shape for a library, he concluded, would therefore be a sphere, which could maximize daylight to the floors, provide a variety of flexible floor arrangements, and maintain an ideal central circulation system. Even though the spherical exterior was ultimately abandoned for this project, Periera preserved the underlying concept of a large middle floor with tapered, smaller floors below and above.

The resulting building is an eight-story structure with two submerged floors and six floors of varying sizes above ground level. The widest of the above ground levels occurs at the sixth floor, which is over two hundred feet wide. A solid core containing the stairs, elevators, and mechanical shafts runs throughout the building. While the “main” level is considered the first submerged level, the experiential center of the building is immediately above it at the forum level, where the building is at its thinnest and the massive overhangs of the floors above cast a heavy shadow over the outdoor plaza.

The tapered cantilevers above the plaza are supported by a simple but ingenious structural system consisting of sixteen massive concrete piers that rise out of the forum level and branch outward at 45-degree angles. They extend past the full width of the sixth floor and bridge the jagged edges of the enclosed spaces with a continuous, diagonal motion that meets the floor plates at their bottom edge. To prevent them from buckling outward under the stress transferred to them by the floors, each pier is connected to its opposite by over three hundred quarter-inch steel tie rods that counteract the gravitational forces.

At each aboveground level, giant sheets of plate glass coated in anodized aluminum provide light to the reading spaces and stacks within. The treatment of the windows allows them to reflect and sometimes blend in perfectly with the sky behind it. The color of the glass oscillates between dull grays, vibrant blues, and fiery yellows depending on the weather and time of day, creating a dynamic and ever-changing appearance. The treatment also allows the vast expanses of glass—38,000 square feet in all—to dematerialize into the sky, intensifying the levitating effect created by the unconventional configuration of the building.

As an icon of brutalism, the library has at times been subjected to the vitriolic criticism so commonly associated with the movement, even being named to a Reuters list of the “Top 10 Ugly Buildings to Visit.” [1] However, while it seems obvious that the building belongs squarely within the brutalist tradition, the original design actually called for a modernist construction made entirely out of steel and glass. While this seems unconscionable given the severe character of the existing building, it wasn’t until cost-cutting measures were introduced that the structure was re-designed with concrete and re-located to the outside of the building. The success of the articulate brutalist language present in the current design, which incorporates Breuer-like flares at the bases of the piers and an intricate lattice system on the underside of the floor plates, reveals a remarkable material and syntactic versatility on the part of the architect.

Although the project may be misunderstood, for the vast majority of the UCSD community, the library is a cherished icon and the symbol of the campus. It is featured prominently on university recruiting materials, and was even briefly incorporated into the university’s logo. In 1995, the library was renamed in honor of Audrey Geisel and Theodor Seuss Geisel, better known as “Dr. Seuss,” following a $20 million gift from their estate and the contents of their archives. And while the library may resemble nothing of colorful, lyrical architecture of the Who Houses, Pereira’s design expresses the same imaginative impulse that made so many people fall in love with the library’s new namesake. 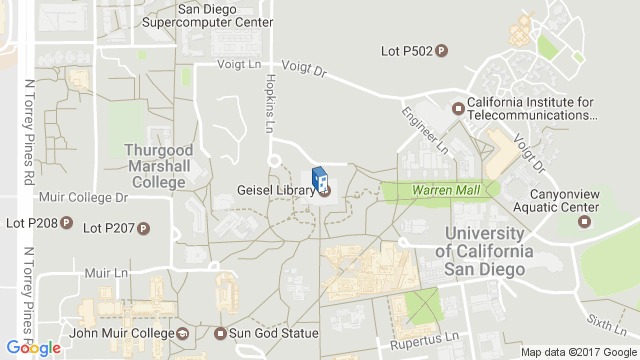 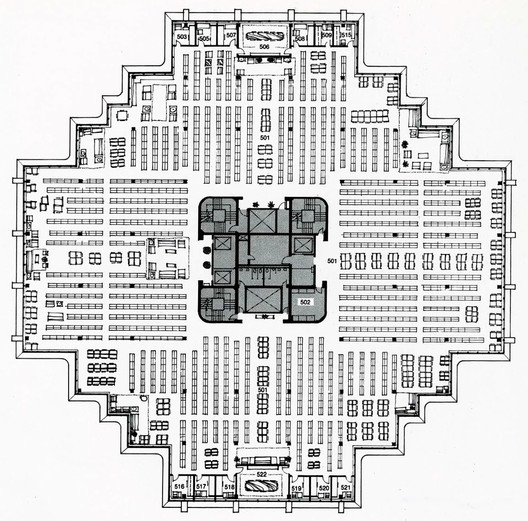