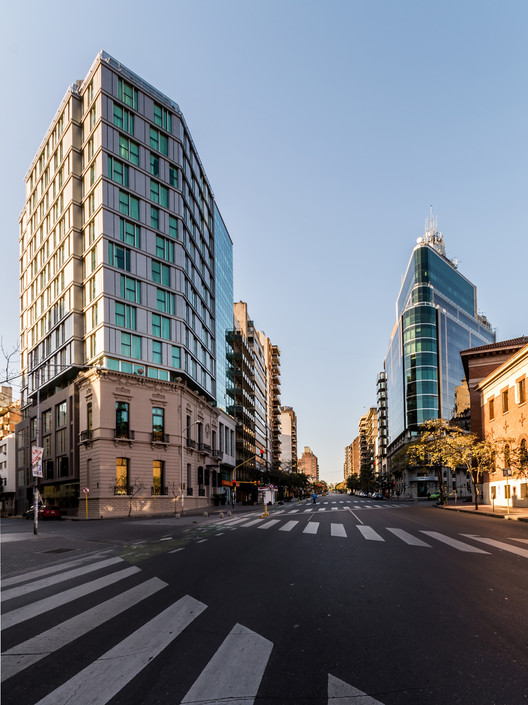 Text description provided by the architects. The project is in the hierarchical center of the city of Cordoba, due to its strategic location in relation to the main historical, socio-cultural, political, commercial, and industrial centers, and their connection to the city revenue. Its architectural context, comprising current buildings contrasted with restored heritage buildings, and diagonal layout, typical of urban projects of the nineteenth century, superimposed to the founding checkerboard layout, generate atypical spatial experiences. It is, without doubt, Hipolito Yrigoyen Avenue.

Facing the Archdiocese of Córdoba, the location of the Yrigoyen Hotel will complete a prominent "gateway" entrance to the avenue, because of the visual and conceptual integration with the surrounding environment. In this sense, the project acts as a hinge. On one hand, it enhances the value of a building that constitutes an urban heritage, while on the other, it enriches the architectural heritage of the avenue.

The latest use of the existing building was for the headquarters of the Museum of Natural Science, and given it is a heritage building, we proposed to design the new construction independently from the existing one, and restore the facade and part of the original environments that had not been modified, as elements that identify the project. Thus, the first four floors of the hotel are part of the existing building, behind the original facade, and from there the remaining floors are covered on the outside by a structural glass facade. The neighboring lot on the side street was then annexed, allowing us to connect it to the project on the ground, first and second floors, generating a conference room, service and staff access, and adding a spa to the amenities. On the other levels, we designed rooms that complement the existing ones.

As for the aesthetics of the tower enclosure, the layout of the framing emerges as a counterpoint to the demanding geometry of the neo-renaissance facade, fulfilling a rhythmic facade with a contemporary enclosing structure made entirely of alucobond exterior panels and gypsum interior with their respective thermal insulation, and aluminum frames with floor to ceiling glass.

The access-egress flows and internal circulation are two important issues that are designed from the need to generate two distinct circuits that work simultaneously, in order to achieve the proper functioning of the project. One of the circulation routes is for guests; the other is the service circuit, which supports the guest route, and is used by service personnel. The logic of the vertical circulation responds to the halls and service spaces. The system consists of four lifts, three of them for guest use, which link the guest rooms with other areas of the hotel, and another, separate one which is part of the services circuit.

The ground floor has two entrances, the main entrance on Hipólito Irigoyen avenue allows traversing the existing façade and entering the "heart" of the original house. The other service entrance is on Montevideo street, which, as its name implies, communicating with service units. In terms of circulation, entering from Av. H. Yrigoyen leads into the hotel lobby, which is especially important with a double height that integrates both spatially and physically, to the breakfast area on the first floor. Note that in addition to the façade and rooms towards Yrigoyen, the original staircase of the building was kept as a utilitarian and sculptural element. This staircase, located in conjunction with the double height of the lobby, revitalizes the space and highlights its architectural qualities.

The restaurant is connected to the outside through a large window on Montevideo street and existing windows on Av. H. Yrigoyen. The spaces that serve the dining hall, the kitchen and storage areas are located underground, freeing up the commercial area on the ground floor.

On the second floor are the multipurpose rooms and administration, with direct access from the lobby to the foyer. The rooms are spacious and spatially flexible, allowing their subdivision into several smaller rooms.

On the following levels that make up the tower itself are the hotel rooms, which are characterized by their spaciousness, light and views to their surroundings. They have high-end equipment and services for upscale guests.

In addition to the hotel, there is an outdoor pool, a fully equipped gym and a spa located on the terrace.

Finally, the project is part of the existing system in the area, as it acts doubly as a complement to the commercial and tourist activities, providing accommodation and food services, while enriching the architectural context of the avenue. 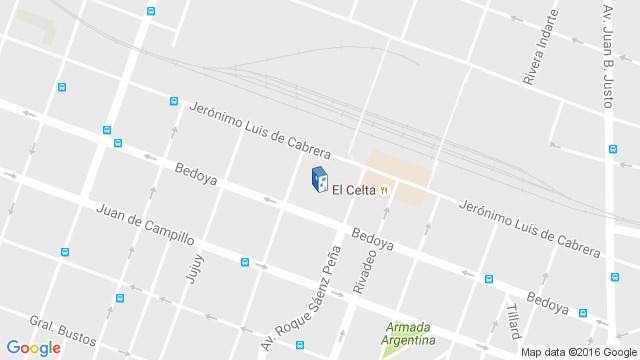