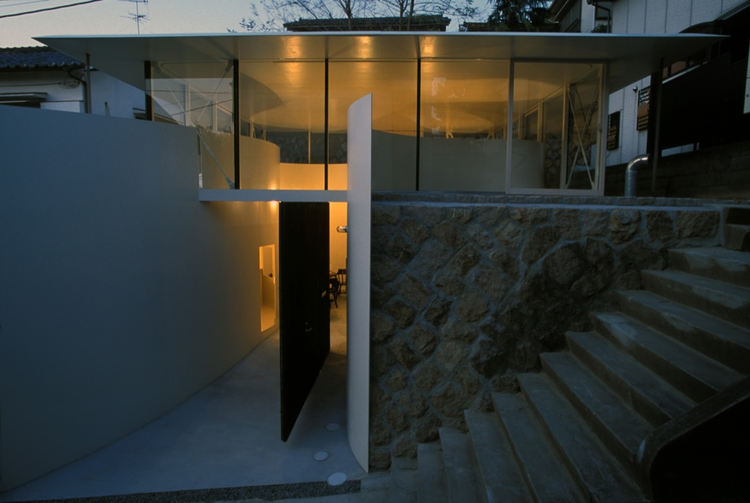 Text description provided by the architects. A housing land development ground and the existing retaining wall were excavated to create space with double-height in the basement, and, in addition, a flat glass box was layered on the ground to accommodate the house space to dwell. It has been proved that excavate techniques enables spaces to be free-formed. A cloverleaf hall with 4.6 meters ceiling height is a common space for the family, and following this space, some laterally excavated spaces lies, which looks like Yaodong, Chinese traditional underground houses, and the each space functions as a private room for study and kitchen and bathroom.

Three loft alcoves on the ground level are private bedrooms. It means that the relationship between the shape of three clusters in the basement and of bedrooms on the ground level in reversal as negatives and positives. Each bedroom relates to the exterior space. For example, loft-2 relaxes narrowness of the floor in hard numbers by projecting an adjacent retaining wall at the north side as a screen. Moreover, one can approach directly to their own bedrooms through the outside stairs.

In structure, a matter of great interest is how to resist sliding caused by earth pressure of adjacent lots on the north and east side. Nine millimeters thickness iron plate is used as both a mold and finishing material. The mold is filled with cement so that resistance to the pressure is gravitationally solved.

The iron plate used for the finishing side was prefabricated dividing it into 16 blocks, and all of the joints were merged into each other to completely weld so that the plate itself wound be an effective water proved layer.