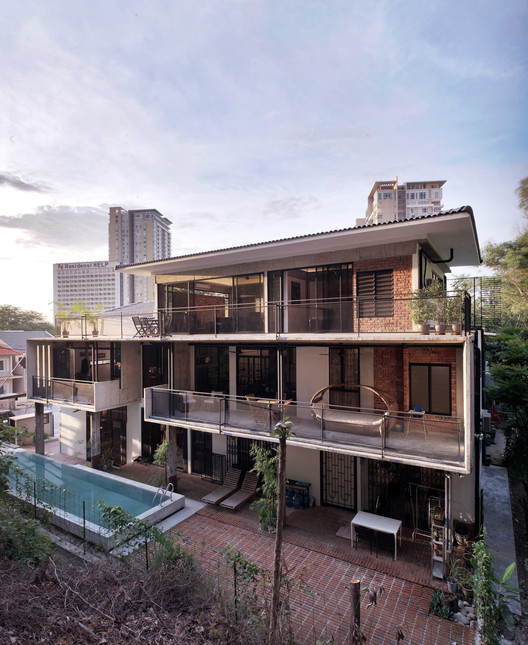 Text description provided by the architects. A major two and a half storey renovation job for an English expatriate couple with a child.   Apprx 5000sqft + built up. This house is “future proofed” and built for flexibility as the clients may rent it out in the future.

The house was a end-lot link house, so of course we had to be careful dealing with the party wall and adjoining neighbour.  What's really nice about this site was it opened up into a sloped jungle and thus the house had a view of amazing greenery to look into!  The downside of this was of course mosquitoes! So every window and large openings were netted.

We retained about a third of the existing structure where we could to minimise cost but at the same time we consiously kept some bits and pieces and features of the existing house which both we and the client like to add character to the house. Makes for amazing conversation pieces! Even an old cast iron soil pipe at the entrance (no longer in use of course!) was kept!

A lot of architects we know shy away from renovation projects as its too much hassle with too many surprises to deal with when you actually start renovating. We actually find it quite exciting and its an interesting process to work around what's already there and how to put them to use. For example, in the master bath and masterbedroom there were 2 structural columns we did not expect that was too messy and costly to relocate so we dressed them up partially and used them as clothes hangers! Which turned out quite well!

The raw and industrial nature of the house was purely intentional-to save cost on finishes! Even the pool was just cement rendered. The strategy is that the clients could always tile the pool later or cover the floors with vinyl or timber flooring in the future if they had more money to spend or if a future tenant insisted on it.    Of course, the clients who owned some converted warehouse properties in the UK also had a affinity for industrial and raw finishes.   This “industrial look” of the house also enabled us to reuse of lot of existing elements from the existing house, like how we re-used the old windown and door grills as staircase balustrading.

When we were building this house, our contractor was also doing some renovation works on other houses. Since this house had the biggest land area, we used it as a warehouse of sorts – so salvaged parts from other houses were brought here and we also used some of them in the house! For example, the master bed frame was actually  made from salvaged grills from other houses!

The top floor is conceived as an independent stand alone apartment of apprx 1000sqft with its own direct access. It can be used as a two bedroom apartment or as an office. This top floor is currently used as Andy's “man cave”. Its a chill out area with a pool table and  nook as his private study / office. We currently only erected partitions to have  a single proper room on this floor  which caters as their official guest room

The rear portion of the 1st floor is also a flexible space that can be kept as a large open area or be divided up to 4 bedrooms. The bathrooms are strategically located with multiple access doors to allow for flexible space allocation. Electrical and air-con services along with the faceplates are all surface mounted to allow for future relocation. The walls to create the rooms in these flexible spaces are dry wall partitons.

The idea is that you can configure the spaces to your need with minimal dry works with no hacking whatsoever. The same principle applies to the rooms at the top floor. Currently, the client requested for a single bedroom at the top floor and 2 bedrooms and a tv room at the 1st floor.

This project took longer than most in the same range as we had a tight budget to keep to thus we had to work harder to be more innovative with design and building solutions. Also, the client was heavily involved in  the design and building process and a lot of decisions were evolved on site:  a “build-first-and-see-then-we-decide” kind of thing!  The involvement and working relationship with the client was amazing – the design was a collaborative brainstorming effort between the client, ourselves and the contractor.  It was not restrictive in any way, though the client did have some executive quirky decisions which we gave it to  as we had some of our own  to insist on as well!  So there was some negotiations involved! - we gave in to some things they wanted but she in return she had to give in to some of ours!

This made it very interesting as the end product was not totally pre-conceived and had surprising outcomes.

From our engagement to commencement of work on site was fairly quick – within 4 months but the construction works on site till completion took about 12 months.

Our climatic response for all our houses are similar – to be as passive as possible. We try to maximise as much natural lighting and ventilation as possible.  The house is designed not to have airconditioning but of course aircons are provided for in all the bedrooms and the living area. The double volume dining/bar space is not airconditioned at all.   The cross ventalition and the fan feature above is sufficient to create a pleasant environment in this double volume space.

Cross ventalition is catered for in all spaces by means of having at least one panel of adjustable louvred glass windows. This enables air flow even during rainy days.