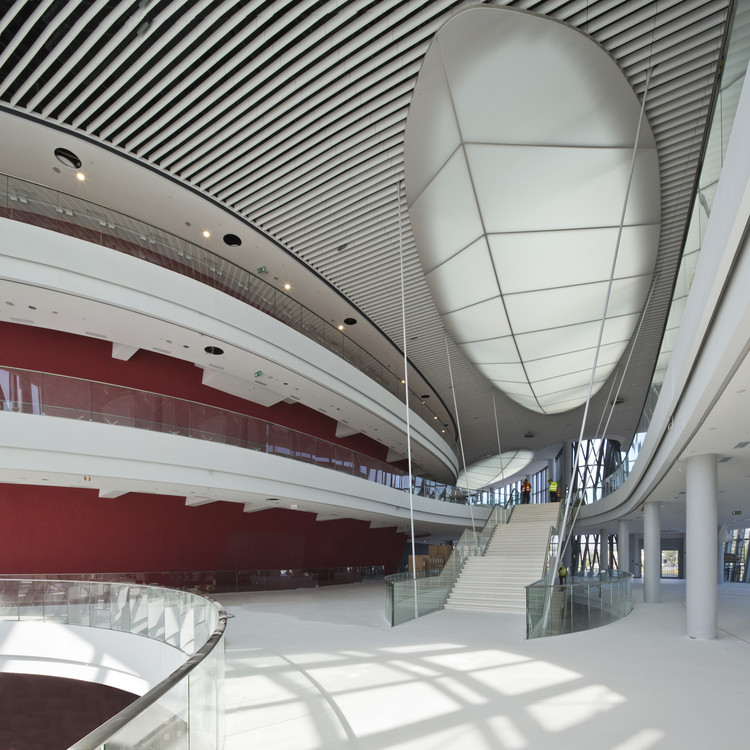 Text description provided by the architects. Commenting on the 2007 verdict announcing the winning design, the president of the jury in the international architectural competition, Luxemburg architect Bohdan Paczowski, admitted that the choice between the works selected for the final round reflected the traditional division into the partisans of the romantic and classicist tendencies in art, and that it was finally the champions of the romantic current who determined the selection of the best design. I believe that Bohdan Paczowski very truthfully and precisely grasped and emphasised one of the most significant and distinctive features of our project, as what we included in our bid – besides the accurately designed functional and technological planes – was precisely the dream of developing free and open spaces, defined with curved lines and surfaces, with unconventional flows and divisions, fluently forming the interior and the external form of the Congress Centre building.

The design strategy is based on four key considerations. The first and most important was the decision to use the panoramic assets of the site itself by placing a multi-storey foyer on the eastern side of the plot and by creating a space where the viewers would orbit along the curvatures of balustrades, the liquid lines of the lights, and the fantastic stairs, admiring the panorama of the City Centre with the centrally situated Wawel, and Kazimierz bristling with the towers of the Church “Na Skałce” (on the Rock) and the bulk of St Catherine’s Church. Such a foyer forms a peculiar additional auditorium for the audience, but is yet also a stage, a place from where Kraków is admired and which, especially when lit for the night, is perfectly visible from the nearby Vistula embankments and Wawel Hill.

The second significant factor in working on the project was the creative use of the limitations, notably the need to adjust the form of the building to the geometry of the arc of the corner plot, and the recommendations of the conservation services setting a cap on its height – 20 metres (65 feet) over the level of the nearby Grunwaldzkie Roundabout, with the option of exceeding the limit in spots justified by technological needs (e.g. over the stages of the auditorium halls). That had a powerful impact on the definition of the shape of the structure, the characteristic line of the roof included.

The following, third group of decisions concerned the spatial typology for the three main halls in the building: respecting the functions and numbers of spectators envisaged by the investor in each. These decisions were made in cooperation with Arata Isozaki and his Tokyo office managed by Hiroshi Aoki, with the team of my Japanese friends together with whom we designed the Kraków Manggha Museum twenty years ago. For the main hall, with its concert and congress functions, the shape of an incomplete “vineyard terrace” was selected, as in this layout the auditorium embraces the stage from the sides, in this way reducing the distance between the spectators and the scene and building an intimate atmosphere despite a relatively large number of seats. The second hall with its theatrical, concert, and congress functions, was formed into a traditional front stage with a movable auditorium on the bottom level. The third hall, a hall of the “studio” type with a flat floor and flexible auditorium arrangements, allows division into two acoustically separate spaces.

The fourth pillar of the design was the definition of the façade and roof. The aluminium roof, visible in its entirety from the Wawel Terrace, was formed into cascades flowing down towards the Vistula which visually diminishes the scale of the building from the side of the river and City Centre. The walls of the building are a composition of glass, ceramics, and aluminium. To open the building to a view of the city, its eastern side is glazed, while the sides and back of the building are covered with an array of ceramic tiles in colours corresponding to the colour-scheme applied to the interior, with red being a reference to the colour of the main hall, graphite to the colour of the second hall, white as the colour of the foyer, and silvery aluminium which is used for the roof finish. In the architect’s conception, such a multi-element and colourful composition is to reflect the movements and dynamics of the Dębniki district developing on the right bank of the Vistula and which only found itself within the Kraków city limits in 1909. The size of the building is thus a proposed means of defining the scale of development in this part of the city, along Konopnickiej Street, south of the Congress Centre. 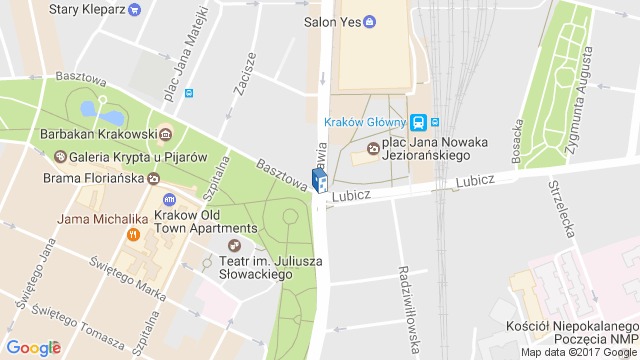