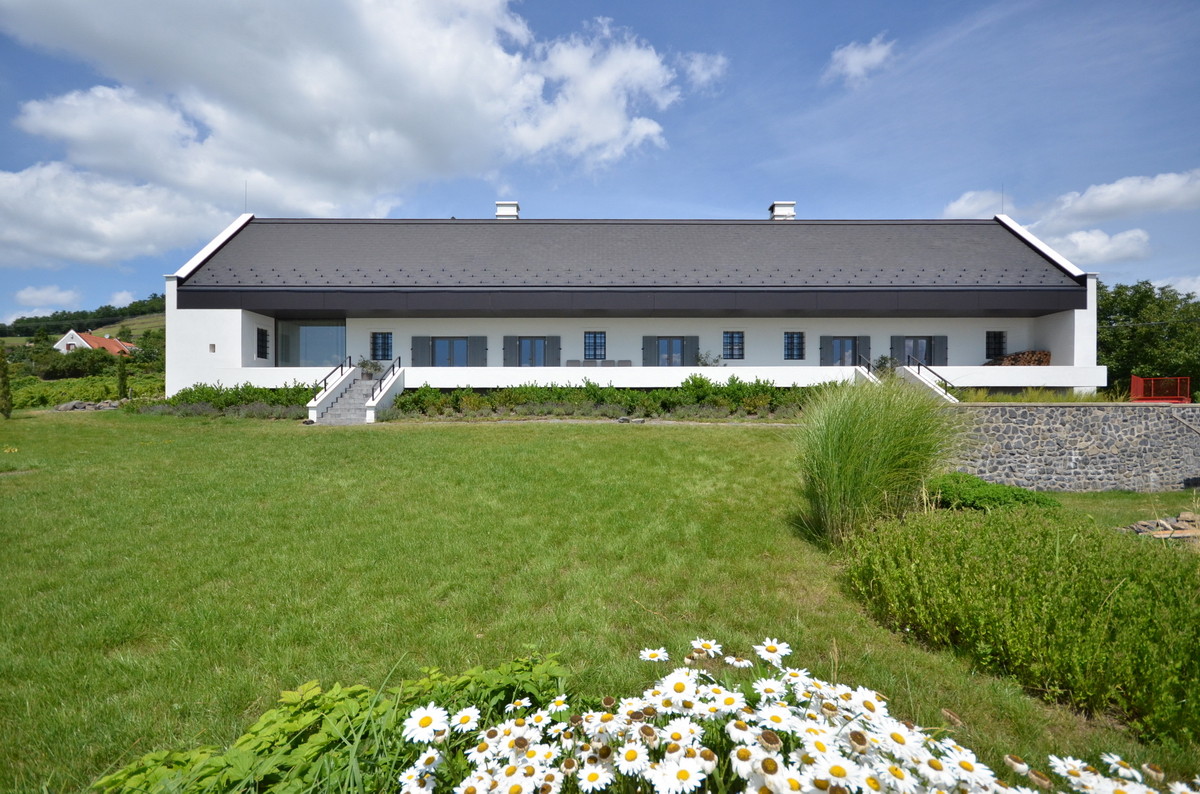 Text description provided by the architects. The refurbished Esterhazy press house and winemaker's cottage sits at the heart of Szent György Hill, which is one of the biggest remnant hill at Lake Balaton. The site is in the neighbourhood of Lengyel Chapel and Tarányi cellar.

The longitudinal, rectangular, single span press house with gabled roof and a cellar create a unity of buildings with the perpendicular winemaker's cottage.

The refurbished winemaker's cottage functions as a winery, preserving the original use of the building.

Our main concept was to keep and restore the remaining parts of the original building, and replace the demolished parts with contemporary forms and materials. During the design of  the building's new segments we kept the original proportions, sizes, character and colours.Our aim is to keep and create continuity, unity between the old and the new, to bring forward tradition and architectural value.

We protected and refurbished the remained building parts (the vaulted cellar under the building, north wall, south wall, west gable, eastern wall and its openings, internal load bearing walls, smoky kitchen and beam). We rebuilt the destroyed elements in a contemporary aproach, rooted in the character and the proportions of the original building.

The building opens to the amazing view of Lake Balaton, in line with our architectuaral concept.

- at the west end of the porch we designed a glass wall, by pulling down an unoriginal, later built wall. The southern wall was pulled down earlier.

- the original timber  columns of the porch were totally demolished, later these were replaced with brick pillars. These unoriginal, bad quality pillars were pulled down and we designed a cantilivered porch without supporting columns.

We kept the unity of the single span interior space. The roof space was converted into a living area, the shape of the roof and the roof angle were preserved.  On the southern roof surface overlooking to the slope we avoided any openings, roof  windows or window structures. The light into the attic spaces comes through frameless glass "eyes", instead of roof  windows. These glass eyes are transparent on all sides, opening the internal spaces to the sight of the basalt organs.

We reconstructed the vaulted cellar in its original form, and it brings forward its original wine cellar function.

The roof is covered with dark coloured slate.  We aimed to recite the original cane roof in a contemporary approach. The folding roof and its colour refer to the colour and thickness of the cane roof. The basalt grey colour of the roof recites the local basalt organs, which are famous local characteristics of the remnant hills. The scale roof  is characteristic to the area, familiar to the slate roofs of the buildings of the rich in the surroundings.

We rebuilt the smaller building - press house - in its original shape, preserving its original floorplan contour and roof shape. By the '90s only the foundation walls remained from this building. The press house kept its original function, still serves as a winemaking and grape processing building.

In the interior of the winemaker's cottage we used white wall surfaces along with fair-faced concrete, wood covering and cut basalt stones. In the winemaker's cottage in some ground floor rooms the surface of the ceiling  is fair-faced concrete,  in other rooms the ceiling is covered with wood ina similar raster to the fair-faced concrete. The sloping roof in the interior is made of  fair-faced concrete, with the pattern of the wooden formwork on its surface. This severe material is balanced by the warm tones of the wood flooring and the solid white painted wood wall covering. The flooring in the ground floor is cut basalt stone, continuing to the porch. The built- in furniture is made of  solid wood, and the counters, custom made washbasins are made of  fiber concrete.

The floor covering of the press house is cut basalt stone, the surface of the wall and the gabled roof  is fair-faced concrete.

The vaulted cellar keeps its balanced temperature all year round, its natural ventilation is provided.

The internal temperature in the press house is balanced without any extra heating or cooling. The even temperature is provided by the multi-layered, heat retainer wall and roof structure with high thermal insulation properties, the shading of the openings and the building's semi-underground position.

The winery strives to create wines of elegance, wines that express their vineyard and regional attributes. They aim to bring to this extraordinary Old World wine region fresh ideas, and great enthusiasm. Their aim is to create hand made, high quality wines by mixing traditional and modern wine making technologies.