Read more
Save
A1 House / A1Architects 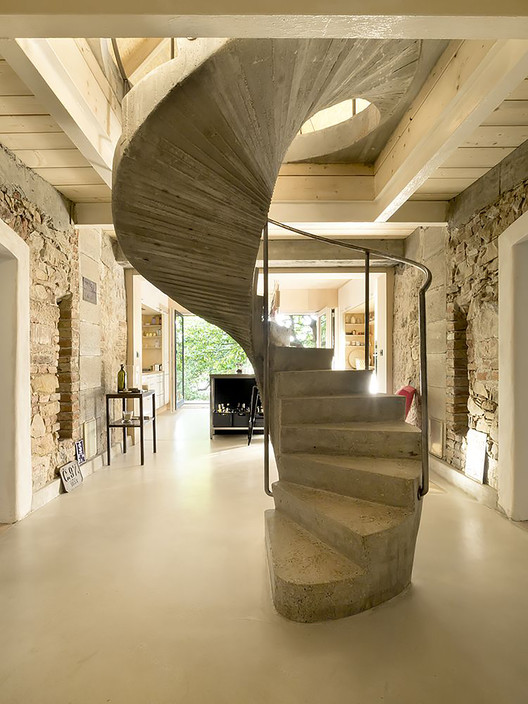 Text description provided by the architects. The old house

Two hundred years ago there was built a small and simple colony of houses called “Among Cottages” aimed for poor workers in old village called Hloubětín in the East neighbourhood of historical Prague City. The village developed and joined the concept of big Prague in 1922. Though the city grew around, the heart of the Cottages remained the same. So a1 could find a site in 2003 with a house still not even connected to the main city infrastructure with original latrine etc. The place has such a unique atmosphere, that one feels beeing in a countryside yet the underground station is 7minutes walk.

The main feature of all the houses there is their pure simple village look with plaster walls and gabled roof with red ceramic tiles. But the interior of our house was for the very first glance a big surprise with its two vault ceilings in the rooms. These two rooms were connected by small central entrance hall and kitchen. The stone and brick walls are thick 900mm and there were only 6 small windows in the house. The old house has a particular heavy feeling and we knew from the very beginning we want to respect it and follow the atmosphere while making it also a contemporary living and work space.

The project for renovation and addition of new structure was Lenka ́s diploma thesis done in 2008 at Academy of Arts, Architecture and Design in Prague. At that time the duo David Maštálka and Lenka Křemenová where already operating under creative name a1architects in Prague.

A1 decided to join their life and architecture under “one roof”, so the new house needed to be built joining the old structure. The main idea how to connect old and new part comes from respecting the typical central axe of the old house, so the cross layout of two intersecting houses became the most convincing after spending almost a year of designing and neverending discussion. The new addition coexists in certain contrast with the old house yet in harmony and respect to the site.

The new house is a timber structure with metal gabled roof and with its specific black charred facade. The central stone walls were turned down and the lightweight timber brought sun shine into an old cave like interior. The cross contraposition of both houses stregthen the local features of village-like urbanism with close and dense neighborhood. The linking of both houses using contrast of materials and structure work in a certain harmony of the main shape of the gabled roofs.

It took almost four years to complete the house and two more years to get all the building permission as it is an addition to a historical site which does not follow contemporary building codes... But it was a great experience, actually we felt as attending another school, the school of reality. The most exciting was revealing the old layers, so the very first drawings became more theory and the building time itself worked as a designing process, like when we discovered the lack of foundation mass which was only 30cm under the terrain or discovering walled window or small cellar etc. Two and a half years took the period of refurbishing and repairing the old house, which became partly a ruin and the last year was dedicated to whole completion and timber structure and all the interior, which follows the idea of two houses made out of stone and timber.

The life of the house

It is a delicate moment to connect the family living and office with other 2-3 colleagues and moreover when limited by an existing house. The main black part oriented to the street works as a1 studio which is perfectly separated from the rest of the private garden by tiny patio in the south enframed by small house of the meeting room, which used to be an old shed with original latrine. So the guests do not enter the big house and only visit the separated meeting room with its small kitchenette and toilet.

The studio itself serves for max. five people. There is an common hall which divides the work and living space. The family part is mainly in the stone house and just the big central kitchen takes place in the intersection of the timber structure which prolongs the house to the back garden with wooden terrase. The kitchen is the centre of life in this house.

Another special issue was how to deal with the staircase in the old structure. In fact the concrete spiral staircase continues in the main central axe of the whole cross of the house and leads the symmetry to the attic level with 3 rooms and bathroom. Symmetry is a main concept of the layout here but it is accompanied by irregularities and aimed assymetrical details. The house itself seems very simple from the outside yet it is very layered in the interior and surprises one how big it could appear from the inside.