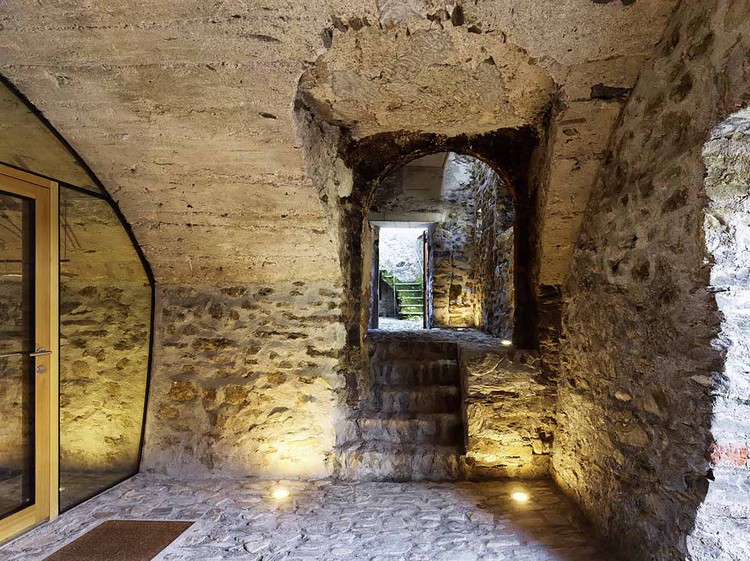 Text description provided by the architects. The original substance of this historic stone house, in the core of the village of Scaiano, consists in a main building with a cellar with vault and two floors above with kitchen, living and sleeping spaces. A later added annex, also completely made in solid natural stone, contained on the ground floor a small grape brandy distillery, on the 1.floor a room with above an attic. An exterior stone stairs and some small walls in front of the main facade, seems to have been created in the same time as the annex. In front of the main building there was originally – before the annex was built - a small square, the only one in the village structure.

Before the conversion this building was inhabited for over two decades. It was protected with a provisory roof against decay, but it needed a complete renovation to be adapted to the contemporary needs of comfort. The stone walls were mainly maintained, just the joints had to be remade. The isolation is applied at the inside of the walls. All wooden beam floors were replaced with concrete floors, which reinforce the old walls additionally.

On the main house, a new pitched roof in wood construction was inserted in the stone walls, meanwhile on the annex it was created a roof terrace with a natural stone-paved floor.

The main architectural target of the intervention was to carve out the force of the massive stonewalls and to gain this archaic simplicity of the volume of the historic building. So the external stone staircase was removed to create again the small village square in front of the house, with a fountain and bench, which invites to spontaneous encounters.

The old cellar with vault becomes the new main entrance: it was divided in an unheated outdoor zone and in heated entrance zone with the wardrobe and a small room with washbasin and shower. On one side the old stonewall was cut out and a stair was integrated, to lead up to the upper floors. The old grape brandy distillery is now also connected to the cellar with vault and can be used as a cool summer outdoor loggia with a simple fireplace in raw steel.

The glass façade in front the rooms, towards the lake, has been placed with a distance of about 60 cm from the old stonewalls. This glass front protects against the outside climate and it’s like a second skin behind the effective facade. This outer zone is mainly not covered and it rains in.

This concept allows on the one hand the authentic conservation of the historic stone façade, which tells the history of the house and on the other hand, it generates zenith light for the rooms with exceptional light reflections. It would not have been possible otherwise to get sunlight into the rooms, in such a village structure with narrow streets.

The materialization of the interior is adapted to the archaic existing: natural impregnated cement floors, stone grey plaster for walls and ceilings, oiled larch wood joinery.

The new intervention is not contrasting the existing substance, new and old are merging together and creating a new ensemble. 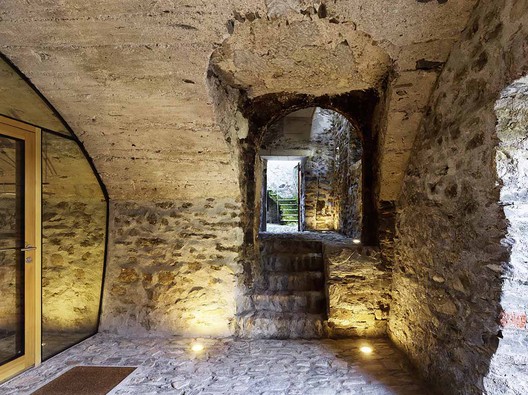