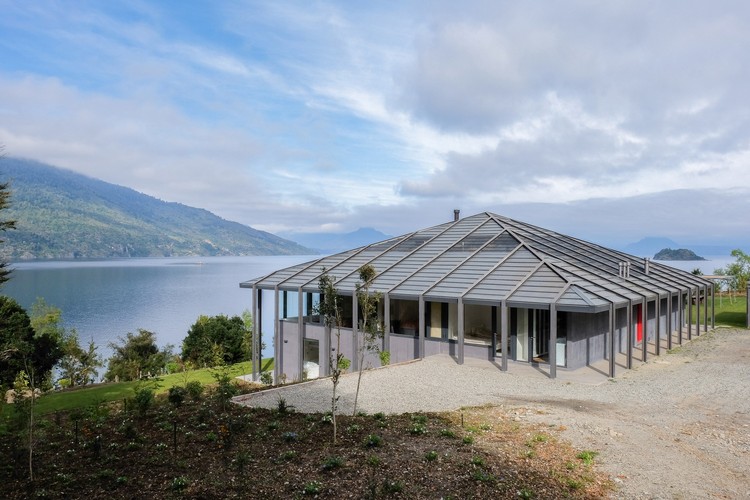 Text description provided by the architects. Located on the western shore of Lake Ranco, in the south of Chile, this vacation house has the capacity to host up to 18 people. The main challenge of the project was to make a compact villa composed by relatively independent parts.

A villa implies a unitary figure made of adjoining rooms with short paths as circulation –gathering people together by reducing the external perimeter. A composition of separate parts entails an addition of rooms with a self-centered shape in plan as well as in section—reducing the internal links while allowing multiple contacts with the outside. The project tries to juxtapose these two compositional approaches within an external structure common to both.

The main rooms are located in a piano nobile and the children’s area in a basement facing the lake. The main floor’s internal configuration is defined by an “H” shape within a nine square grid, in order to gradually enter from the outside to the center, and from there to each room. All these parts are covered by a symmetrical four-pitched structure made of metal beams, directly supported on metal columns with different heights, following the levels of the ground.

Each room is, to a certain extent, dependent on the overall system while simultaneously preserving its own independency—its own center. The structure is autonomous and relates only the crucial parts of the project, aiming to balance the attributes of the building as a whole with the specific requirements of its parts.